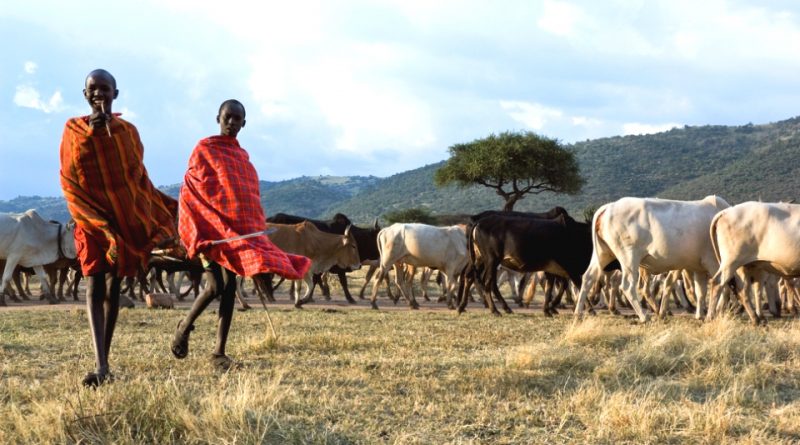 The Masai and agriculture

The Masai (or Maasai) are a Nilotic people living on the highlands around the border between Kenya and Tanzania, who venerate one God immanent in everything, which can manifest itself in benevolent or destructive forms. However, today many Masai have embraced different Christian faiths. It is a population that is often nomadic or semi-nomadic, with the characteristic of being above all, traditionally, transhumant breeders, and today often even settling (especially in Kenya). In the Masai the transition to a sedentary lifestyle is accompanied by that from breeding to agriculture as a primary source of sustenance; we find this transformation, evidently, in the Kenyan Masai clans such as Kaputiei, Matapato and Kikunyuki, and in Tanzania at the Arusha.
The Masai are the Nilotic people who live more in the south in Africa. Today they are divided into twelve clans (Keekonyokie, Damat, Purko, Wuasinkishu, Syria, Laitayiok, Loitai, Kisonko, Matapato, Dalalekutuk, Loodokolani and Kaputiei), although there are minor clans, often referred to as sub-clans.
According to the oldest tradition of the Masai it is said that their origin took place when the ancestor of all the Masai – Mamasinta – went up the great ravine. The geographical reference fits well with the series of steep escarpments that separate the valley of Lake Turkana, in northern Kenya, from the central highlands of the country.
Based on the oral tradition handed down, combined with linguistic studies and archaeological findings, it can be said that the Masai began their migration southwards from the Nile valley around the 16th century. It was a great migration of Nilotic peoples that will give life to all the Nilotics that now live in southern Sudan, Uganda, Kenya and Tanzania.
At one time the Masai divided the territory into areas under their strict control – each clan knew the extent of its property and each clan family knew the land they belonged to. There were also areas of passage and free grazing, usually used in case of famine or particular drought, and areas shared with other ethnic groups, such as the mountains of the Mau Range, the forests inhabited by Ndorobo, Elgeyo and Marakwet, areas border with the Kikuyu.si said that the Masai were fierce warriors but it was more a rumor spread by the kamba porters and Arab merchants who wanted to discourage other groups to explore the interior and establish alternative merchant routes. If it is true that the Masai used to raid the cattle of other ethnic groups, this is true for all ethnic groups.

Their relationship with the breeding of cattle harbor, between 1883 and 1902, the Masai to suffer because of the plague and smallpox. Among other things, in the same years, a series of total droughts between 1897 and 1898 led to the death of most of the livestock and perhaps a third of the population and, as a result of internal struggles, the almost total disappearance of some clans , such as Laikipia, and new relationships between the different clans.
The relationship between this people and transhumant breeding was subsequently weakened by the arrival of the English colonizers who, with two treaties in 1904 and 1911, took their territory from Kenya. In Tanzania, they lost all the most fertile lands from Kilimanjaro to Mount Meru, thus weakening the social structure of this people. Other land was lost when the great national parks of the Amboseli region were established, Hell’s Gate, Masai Mara, Nairobi, Samburu, Lake Nakuru and Tsavo in Kenya; Lake Manyara, Ngorongoro, Tarangire and Serengeti in Tanzania; fortunately now many areas of these parks are open to pasture or left to the local communities. The subtraction of the Masai lands, to make room for farms, farms or national parks managed by the government, have forced this population to live in the most sterile and arid areas. To avoid further weakening of the Masai civilization, in September 2013, the Tanzanian government announced that it had abandoned the project for the creation of a protected area that would have stolen the Masai 1,500 square kilometers of land, leaving the area of ​​Loliondo to Masai, who have “good care” from “immemorial time”.
To avoid that this population, with their traditions, their civilization disappears, we must understand that the Masai are traditionally shepherds, and their culture gravitates around the care of livestock. They lead the cattle from one pasture to another, to give the grass the chance to grow back; at one time, these movements were guaranteed by a system of collective land ownership, which gave everyone the opportunity to share access to water and pastures.
There is certain evidence of an agricultural period before arrival in the areas that they occupy today, and the tendency towards agriculture and stagnancy is increasingly driven because of the increasingly limited pastures and the need for cash that has replaced the system of bartering the pre-colonial society. It can be said that for the Masai livestock is what makes life happy, and milk and meat are their favorite foods.
Thus the health and strength of the herds reflect those of these men; the Masai use milk, blood and urine as food, manure as building material, horns as containers, hooves and horns for ornaments, leather tanned for footwear, clothing, etc.
Although their traditional way of life was based on livestock breeding (they could obtain other foodstuffs through exchange), today, with the evolution of historical processes, the Masai have been forced to practice agriculture as well. But this means distorting populations that are, by tradition, excellent breeders and rarely have more animals than they need and how much the territory can endure. The interference of the authorities actually aims to change their system of community access to land. Thus the Masai have been progressively forced to adopt a sedentary lifestyle, and many have found work in the cities. And so, if on the one hand satisfied foreigners and some entrepreneurial Masai who were able to buy or sell land, on the other, this “development” policy, without ecological culture, is drying up the territory and led to the poverty is a large part of the Masai people, relegated to areas that are too small and unsuitable for self-support.
To understand the link between the Masai and the cattle, suffice it to say that a wife is bought with three cows, two sheep and an ox, and the number of wives depends on the quantity of herd herd. These people have a real emotional bond with their beasts, which are lovingly cared for and sometimes artistically decorated.