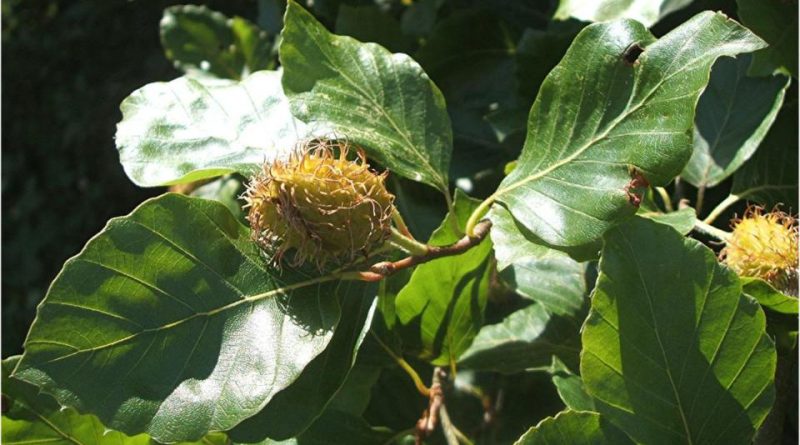 Systematics –
From a systematic point of view it belongs to the Eukaryota Domain, Kingdom Plantae, Magnoliophyta Division, Magnoliopsida Class, Fagales Order, Fagaceae Family and therefore to the Fagus Genus and to the F. sylvatica Species.

Geographic Distribution and Habitat –
Beech is a typically European plant, present from southern Sweden to the mountains of Sicily and Great Britain to south-eastern Russia. In Italy the beech is present in the Alps, the Apennines, the Nebrodi, the Madonie and Etna, while it lacks the natural state in Sardinia, a region in which it was introduced for forestry purposes and in which the climatic vegetation of the mountain horizon ( 1200-1800 m) is represented by holly and taxus consortia. On the Apennines it forms pure woods reaching the upper limit of the arboreal vegetation; in the Alps the optimum for beech is found in the mountain belt of the esalpic district, where it forms large, pure populations. In the bands at higher or lower altitudes, the populations undergo the entry of other species more resistant to frosts (such as fir) or more tolerant to aridity (such as the black hornbeam). 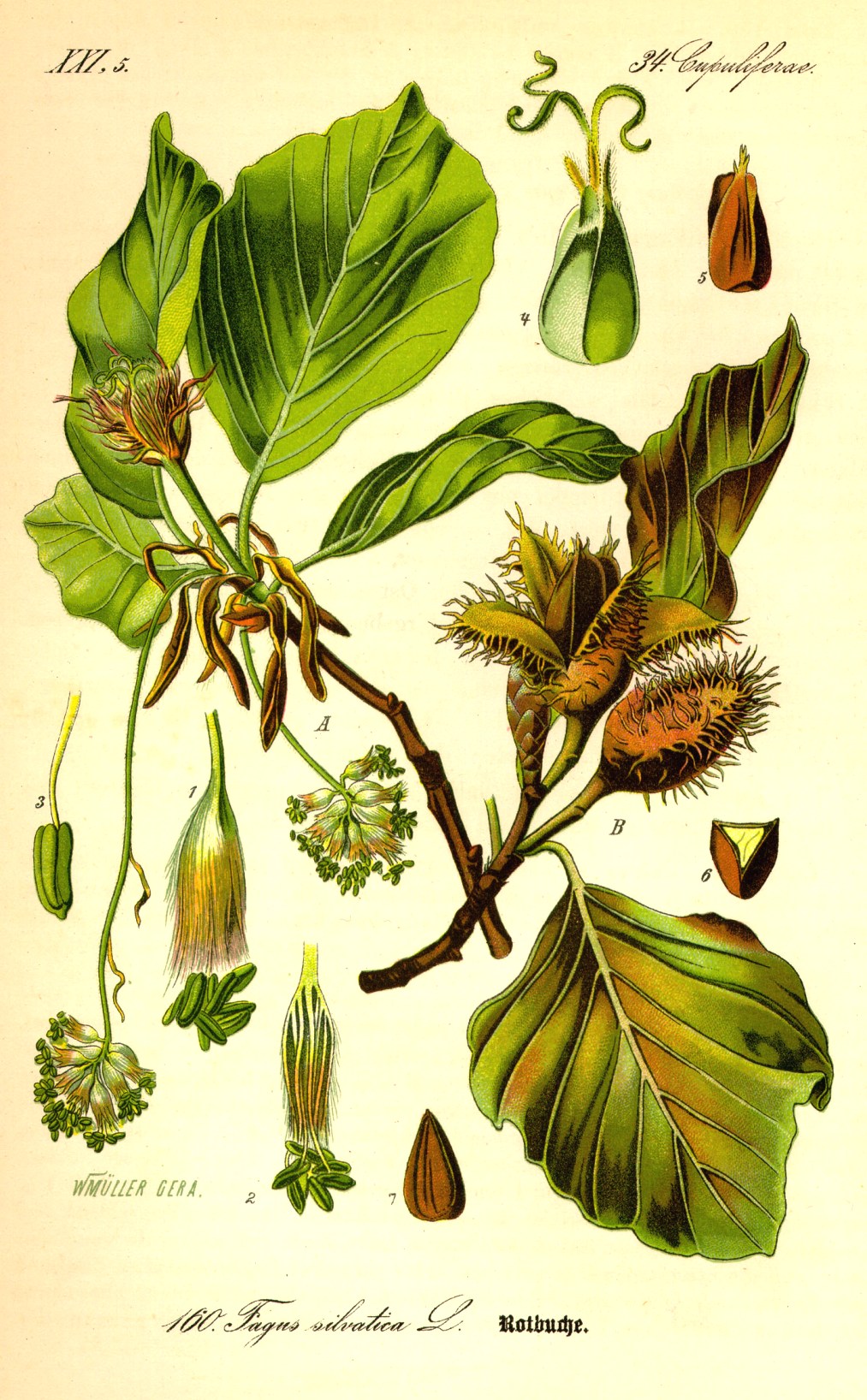 Description –
Fagus sylvatica is an arboreal species that can normally reach 20-30 meters in height. It has a conical-globular hair with a tendency to expand in adult plants and with thick and dense vegetation. The trunk is straight, cylindrical when young, widely fluted by old; presents a thin rind characteristically smooth and shiny light gray. The leaves are alternate, ovate-elliptic, 10-15 cm long, slightly wavy and ciliate in the margin, with straight and parallel secondary nerves that have a short petiole and are initially flushed, then darker, darker on the upper side. under. It has unisexual inflorescences, with the masculine ones in pendent glomeruli each endowed with a long peduncle and the erect female ones constituted by 1-2 flowers surrounded by 4 broad upper bracts and by numerous linear lower bracts. The fruits are achenes, called “beeches” that resemble small triangular chestnuts, enclosed two by two in a woody envelope covered with soft quills.

Cultivation –
The common beech is a sciaphilous species that easily aggregates with other essences, especially conifers and which adapts to any terrain. In unfavorable conditions it looks like a prostrate and very branched shrub, suitable to bear the weight of the snow cover for long periods. It grows in environments with abundant rainfall and high humidity, but at the same time is disadvantaged by the stagnation of water in the soil, by intense cold and prolonged drought. He does not like the deep or dark depressions of the valleys, but not even the dry summits. It is favored in that part of the mountain where clouds and mists gather. In the presence of not very acid soils and fertile humus it grows well on both carbonatic and siliceous rocks, in difficult conditions it prefers a carbonatic-dolomite substrate instead. As for the silvicultural aspects, the beech woods are treated both in coppice and in fustaia. The coppice government is now in progressive disuse, with the consequent conversion to tall trees. For its propagation, the valuable cultivars are multiplied in March by split grafting or in June by grafting by eye or by approximation.

Uses and Traditions –
The wood is clear, almost white, and takes on the well-known pink color through vaporization and drying. With the action of light, the color turns to pale yellow. More and more often beeches form an optional brown-brown heartwood with an irregular “starry” outline. Once described as typical wood with a diffuse porosity, today it is known by some experts to be semi-diffused porosity wood, since the pores in the late wood are less numerous and smaller. The medullary rays are clearly visible in all the cutting sections and characterize the design of the wood, above all in the tangential section, where they appear in the form of thin spindles some a few millimeters high.
Beech wood is easily colored and can take almost every shade of color. It is not durable (durability class 5) and is very impregnable (not impregnable in the presence of a red heart).
It is widely used in the construction of furniture and interior furnishings: for ex. chairs (especially in folded wood), veneers and plywood (also folded plywood), stairs and parquet (strips and mosaic). Other fields of application are toys, kitchen utensils, brushes and parts of tools, packaging such as fruit crates. Impregnated with tar is still used for railway sleepers. In addition to this, beech is used in the production of cellulose (from which textile fibers are subsequently obtained) and in the production of various panels in woody material. Beech wood is finally appreciated as firewood, as well as for the production of charcoal.
Fagus sylvatica is a very used species, for ornamental purposes, in parks and gardens.
Among the varieties of greatest ornamental interest we mention the Fagus sylvatica var. pendula (with long falling branches), the Fagus sylvatica var. purpurea (with red-vinous leaves) and Fagus sylvatica var. asplenifolia (with characteristic deeply incised leaves).
Decoctions are also made from the roots and bark of the beech.

Preparation Mode –
By distillation of beech wood, creosote is obtained, an oily liquid with an acute smell of smoke and a strongly aromatic flavor, which is used as a disinfectant and expectorant.
The beechnuts are edible and are used in some traditional recipes, if you can get an oil by pressing.
The decoction of young roots harvested in spring or autumn is anticonvulsant.
The decoction of bark collected preferably in the spring, chopped and dried, has febrifugal and astringent properties.
The beecasts deprived of poisonous pericarp, eaten roasted as substitutes of chestnuts, hazelnuts or almonds, toasted are a substitute for coffee. Some species of wildlife including wild boar are greedy.
The oil extracted from the seeds, pale in color and sweetish taste, is used as a condiment and once as a fuel.