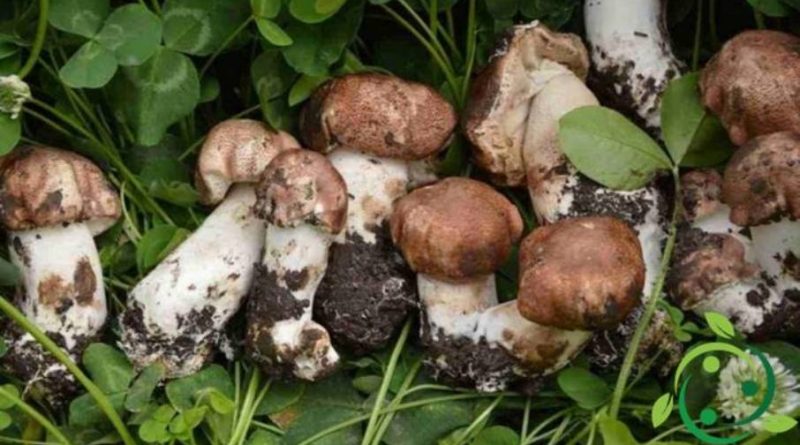 How to grow Agaricus blazei

The Agaricus blazei (Agaricus blazei Murrill (1945), which is biologically and phylogenetically the same species of Agaricus subrufescens (Agaricus subrufescens Peck (1893)) of North America is a secondary saprophytic fungus, meaning that it develops well on already partially degraded substrates from other microorganisms For its cultivation it is possible to use composted straw and cow dung, on a substratum similar to that used for the Agaricus bisporus, to which reference is made.
This fungus is grown in Brazil, China, Japan in semi-natural conditions, while in the United States crops are mostly in protected environments (indoor). To obtain the fructification of these mushrooms it is necessary to maintain relatively high temperatures, constantly between 20 and 25 ° C, in environments maintained with a high humidity level and lighting is also necessary.
The Agaricus blazei has a white flesh and the taste of “green walnuts” and the smell of almonds (due to the content of benzyl alcohol, benzonitrile, benzaldehyde and methyl benzoate). It is a fungus that is attributed properties useful for strengthening the immune system; in fact it is also used as a hepatoprotector and antioxidant.
In this regard, however, it must be emphasized that these fungi, used in folk medicine and alternative for its presumed anti-cancer effects, have not been evaluated by sufficient clinical research to define safety and biological properties as food, dietary supplement or drug. Among other things, preliminary research indicates that the products marketed, based on Agaricus blazei, can have toxic effects on liver function by inhibiting P450 enzymes, especially in people with ovarian cancer and may, inter alia, cause reactions allergic. For this reason in the United States, the Food and Drug Administration has had to issue warning letters to companies that market supplement products based on this fungus, with statements of its beneficial effects that have not yet been proven.

This is also because the growth environment and cultivation techniques can greatly influence both the concentration of beneficial active ingredients and the possible presence of contaminants, which should be concentrated in the extracts and / or in the dried product. The cultivation in a protected environment on substrates deriving from selected raw materials and maintained under standard process conditions, guarantees the best results, both in terms of yield and quality produced, also for the purposes of the content of molecules with therapeutic activity.
The Agaricus blazei is called in Brazil “cogumelo de deus”, ie mushroom of God, in Japan Himematsutake. This fungus contains polysaccharide compounds, belonging to the group of beta-glucans, with antitumor activity, in concentrations much higher than other medicinal mushrooms, among which we report: Ganoderma lucidum (Reishi), Shiitake and Maitake (Grifola frondosa). The anti-mutagenic activity, on the other hand, seems to be linked to a polyunsaturated fatty acid, ie linoleic acid.
For this reason, the careful selection of the raw materials used in the preparation of products for medicinal use is fundamental, both in the phyto-therapy sector.
Agaricus blazei contains 38.5% protein, 2.6% fat, 27.7% carbohydrates, 12.4% beta-glucans and 20.6% fiber even if these percentages vary depending on the stage of growth of the fungus. It is also very rich in many important minerals including: iron, calcium, phosphorus, copper, zinc, potassium and sodium, etc. as well as the vitamins of group B and vitamin D.
The main mechanisms of action, attributed to this fungus, are: purification of the body and antioxidant, strengthening of the immune system against viruses, bacteria, HIV, candida and infectious diseases, rebalancing of defenses and is very useful in all forms of allergies and autoimmune diseases. It is used as a hepatoprotector and as an adjuvant in the different forms of hepatitis, in overweight due to the reduction of appetite, increased antioxidant power of the skin, improving its appearance and tone.
In Japan it is taken as an antitumor prevention and of diseases in general; there are studies that show how, this fungus, given to mice for ten days before inoculating tumor cells, does not make the tumor take root, while in the group of guinea pigs that has not been given the fungus the tumor takes root and progresses. Furthermore, it seems to contrast the side effects due to chemo and radio. Obviously, being a product of “recent” introduction, prudence is never too much, but also research must not waste time in giving definite and concrete proofs for the benefit of everyone.
Certainly today we know that with the Agaricus Blazei you can prepare delicious dishes. The recipes that can accompany the mushroom Agaricus Blazei include vegetable soup, mushroom tea, pumpkin soup with ginger and mushrooms, sea bass with mushroom sauce, cannelloni with ricotta and mushrooms, fillet with mushrooms, rice with mushrooms, dressing for natural salad , etc.