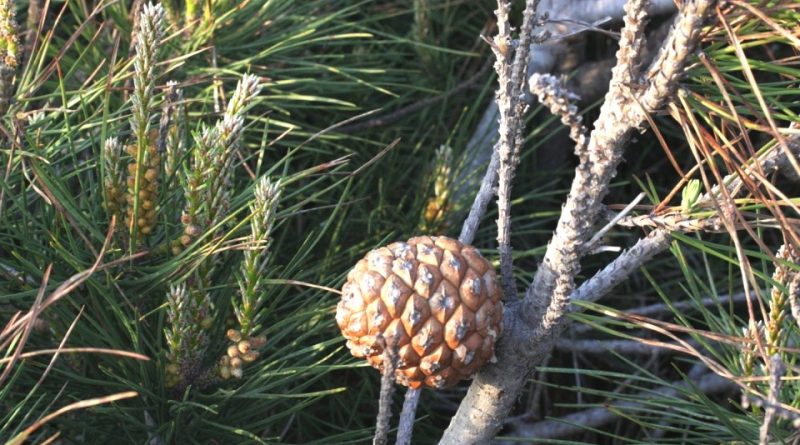 The Domestic pine (Pinus pinea L., 1753) is an arboreal species belonging to the Pinaceae family.

Systematics –
From a systematic point of view it belongs to the Eukaryota Domain, Kingdom Plantae, Pinophyta Division, Pinopsida Class, Pinales Order, Pinaceae Family and therefore to the Pinus Genus and to the P. pinea Species.
The terms Pinus sativa, Pinus fastuosa, Pinus domestica, Pinus maderiensis and Pinus esculenta are synonymous.

Etymology –
The term of the genus Pinus derives from the Latin name of the pine tree, connected with the Sanskrit pítu resinous, cited by Pliny, Virgil and others. The specific pinea epithet refers to the Latin name of the pine cones (fruits of the domestic pines that produce edible pine nuts) that was nux pinea, substantiated in pinea: Pinus pinea therefore sounds like the pine of edible pine cones.

Geographic Distribution and Habitat –
Pinus pinea is an arboreal species native to the Mediterranean coasts, widespread in Italy (from Lauretum to the hot subarea of ​​Castanetum). This has an original range that was probably found in Corsica and Sardinia, but has been cultivated for almost 6000 years for seeds that have also become a bargaining chip. It forms coastal forests called pinewoods, where it lives in association with other plants of the Mediterranean scrub. It prefers acidic volcanic rocky soils and also cliffs in coastal or inland areas. In Italy it is cultivated everywhere, with the exception of mountainous areas. It is also naturalized in southern Africa, where it is considered invasive, and commonly planted in California, Australia and Western Europe, to southern Scotland. 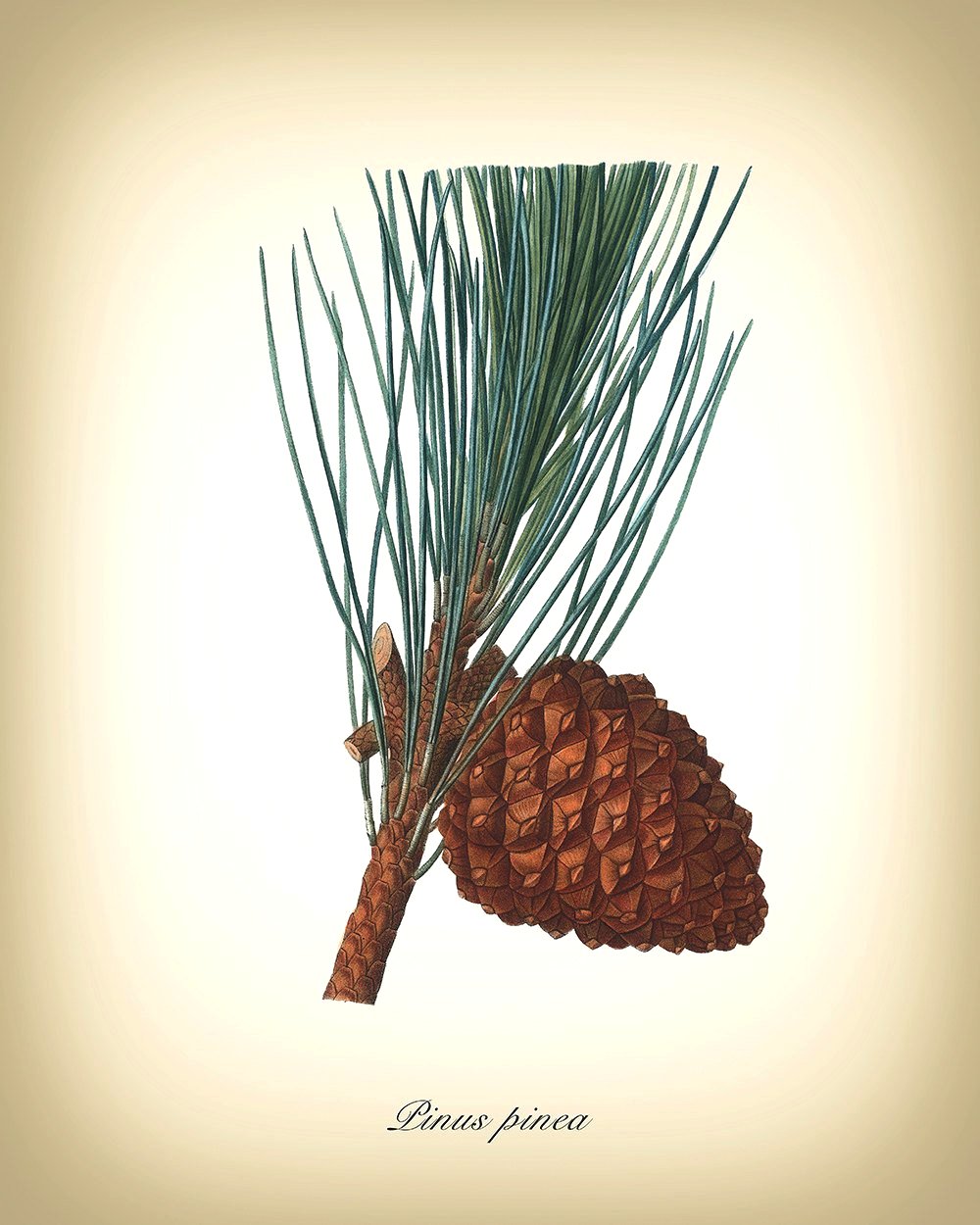 Description –
The Pino domestica is a tree that can reach 30 meters in height and with a maximum trunk diameter of almost 2 meters. It has a characteristic umbrella-like crown, formed by branches that are concentrated in the upper part of the trunk ending with the points facing upwards. The trunk is straight and often bifurcated in the old trees at a certain height while the bark is initially gray and finely wrinkled, then deeply furrowed in brownish-gray plates. The leaves are 12 to 15 cm long, rigid, bright green needles, pungent at the apex and at the base are wrapped in a transparent and persistent sheath. The male cones are numerous, small, yellow at the base of the branches of the year; the female ones are first small and roundish, then globose and heavy with a diameter of 10-12 cm, first green, then red-brown at maturity (after you years). The wood scales each contain two seeds from the woody shell (pine nuts).

Cultivation –
The Pino domestica is a rustic species, adaptable to all terrains, undemanding and likes more loose and sandy ones; it does not tolerate too calcareous, compact and / or excessively marshy soils. It is a distinctly heliophilous species (it does not tolerate the shade) and is very sensitive to absolute minimum temperatures, which should never drop below freezing. Even the snow damages the tree, cutting off its branches.
The tree, on the other hand, tolerates summer aridity very well, with maximum temperatures of over 30 ° C and poor rainfall, even if, contrary to what is believed, an excessively prolonged drought over time damages it. It also does not bear atmospheric pollution, especially that carried by brackish winds from maritime areas polluted by surfactants.
For the planting of this plant it is good to grow them in a vase for some years before laying them down. It is quite difficult to obtain seedlings because of the fragility of the young specimens, which are easily attacked by pests or diseases; generally it is propagated by cuttings, in spring or in late summer.
The planting of seedlings must be carried out at the end of spring-early summer, reached 5-10 cm in height and possibly should no longer be transplanted. But we must take care to protect them from the cold for the first two winters spent outdoors and to mulch the surrounding area to discourage the competition of weeds. For details of the cultivation technique, see the following sheet.

Uses and Traditions –
The Pinus pinea has been widely used in forestry and the maintenance techniques of the pinewoods consist in thinning after planting (which in ancient times happened with the sowing) and in cuts of renewal of the entire parcels reached maturity, around 80-100 years.
After this last cut, called a satin cut, the parcel is now replanted to restart the cycle. In this way, the seedlings are guaranteed a correct amount of light. In the 80s of the twentieth century, this part of the group has been moving towards an interruption of the planned cuts, both for economic reasons and for reasons of conservation of the landscape; the recovery of silvicultural activities in the last twenty years now takes place in a different social, economic and environmental context, which poses new problems and challenges for owners and managers.
As for the production of pine nuts, this is undergoing a dramatic collapse since 2005-06 throughout Italy. This is mainly attributed to the insect Leptoglossus occidentalis, which feeds on the strobili (pine cones) during ripening, causing abortion (the pine cones do not ripen, or pine nuts are missing, or they are empty). Other probable causes are monoculture, soil acidification, lack of thinning and pruning in the right time, repeated and prolonged summer droughts, and more generally climate change. Currently the largest world producer is Spain.
Because of the high number of specimens in Italy, it is considered by many to be the symbol of the country, so much so that in the Anglo-Saxon states the domestic pine is called “Italian stone pine” and in France “Pin d’Italie”.
In ancient times, the main use of domestic pine was the production of pine nuts that constituted a very important basis of human nutrition. For this reason it has been widely used for the pinewood plant along the coastal areas, even where the climate is not optimal for the species (Adriatic high pine forests). As for its timber, this wood is used in carpentry (even if it has few uses as it is very resinous), for packaging and for shoring and reinforcement in tunnel work, even if the knots, large, make the wood not very resistant from a mechanical point of view.
As for the resin, it seems to be very aromatic and able to fight respiratory diseases.
Above all, pine cones were once used to make garlands. The small specimens were also decorated as Christmas trees.

Preparation Mode –
As mentioned by pine cones are obtained pine nuts, very used in confectionery and in some typical dishes (especially Ligurian) or in the famous pasta with Sicilian sardines or in fillings.
As for the resin this was melted on the flame so that the perfume impregnated the room of the sick and to treat, as mentioned, the respiratory affections ..