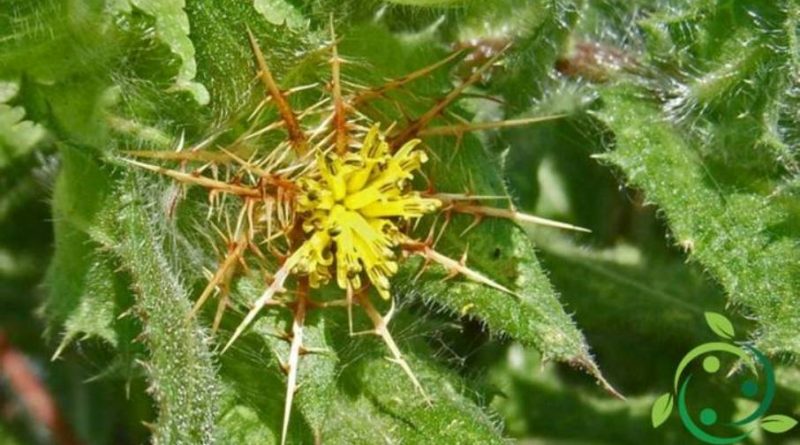 Properties and uses of the holy thistle

The holy thistle (Centaurea benedicta (L.) L., 1763) is an annual herbaceous species that belongs to the Asteraceae family. It is a plant with a white tapooth root, 20-60 cm tall; with a reddish-purple, villous-downy stem, erect, branched-branchy, leafy up to the apex. The leaves are pale green, glandulous-woolly, alternate, sinuato-pennatifide, with white ribbed rachis, of which the basal ones are shortly petiolate, long up to 30 cm and those of the semi-embracing caulas or briefly flowing on the stem, all in segments toothed-spiny triangular.
The plant is characterized by inflorescences gathered in solitary flower heads, 2-3 cm in diameter, located at the apex of the stems, surrounded by a set of large leafy bracts, inserted under the head itself. In this sheet we see properties and uses of the holy cardo and some useful indications for its cultivation.
In fact, this species was once cultivated. You can sow in April, possibly in rows with a sixth of 60-70 cm x 30 cm. As for the harvest, the plants were cut at the beginning of flowering in summer, even with the possibility of making a second mowing in the autumn period.

The cardo santo contains bitter glycosides, such as cnicina, ethereal oil, sugars, mucilage, tannin, resinous and gummy substances, moreover from its burn a large ash is generated with the presence of potassium, calcium and magnesium salts.
The cardo santo, for its qualities, is used above all in phytotherapy. The whole dried plant (removed the larger parts of the stem) and flowered, has bitter, tonic, stimulating, emagogical, diuretic, diaphoretic properties. Attention because the overdose causes tracheo-esophageal burns, vomit and colic accompanied by diarrhea. This plant is not recommended for those suffering from hyperchlorhydria or kidney injury. For the bitter-tonic and flavoring properties, it is used in the preparation of vermouth and digestive bitterness.
One of the active ingredients, cnicina, has antibiotic and anti-inflammatory properties.
The use of Centaurea benedicta is contraindicated for subjects suffering from gastric hyperacidity and allergic to asteraceae.
A legend tells that this herb was introduced by the Indies in the mid-1400s and donated to Emperor Frederick III, who recovered from his migraine, which as a result of these beneficial effects named her blessed.
It was also very popular in the sixteenth century, Shakespeare lauded it as an excellent remedy against palpitations.