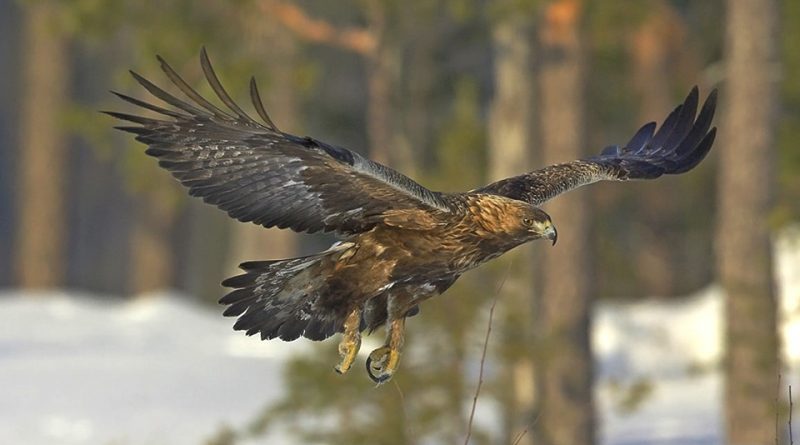 The golden eagle (Aquila chrysaetos (Linnaeus, 1758)) is a bird belonging to the Accipitridae family.

Geographic Distribution and Habitat –
The golden eagle was once widespread in the temperate zones of Europe, in the northern part of Asia, in North America, North Africa and Japan, where it also nidified in the plains and forests. Currently in most of these regions the eagle is only relegated to the mountain ranges.
In Europe it is absent in Iceland and Ireland where there is an attempt to repopulate it. The northern limit of the eagle is the Svalbard Islands (81 ° N). It is present in Eurasia, North America and North Africa. In Italy it is found on the Apennines, on the Alps and in the reliefs of Sardinia and Sicily.
The typical habitat of the golden eagle is usually composed of a nesting site with rock walls hosting the nests and a series of little or no wooded hunting areas, usually located in a peripheral position with respect to the sector with the nests. The nests are always located below the summer hunting grounds to facilitate the transport of heavy prey to young people, therefore at heights around 1700-2200 m.
The Aquila chrysaetos, in general, frequents a wide range of open or semi-tree environments and, thanks to its flexibility, has been able to colonize a large area both in Eurasia and in North America.

Description –
The golden eagle is a bird 70 to 120 cm long, including the tail, with a weight that can range between 3 and 7 kg.
It has a color that can vary with age and to reach the adult dress you have to wait 5 years of life. We move from white parts in the plumage, present in the young, to plumage that tend to fawn in the most adult specimens. The legs, typical of birds of prey, have short fingers and large claws, necessary to injure their prey. The beak is strong and robust to be able to injure and even kill animals of all sizes.

Biology –
The golden eagle, depending on the area, feeds on mammals and birds. Predominated mammals are rodents, hares, marmots, citellos, porcupines, wild rabbits, squirrels, foxes, martens, martens, dogs, cats, wolf cubs, rarely roe deer, and in general young of any animal of a size appropriate to its capacity. Among the birds prey other birds of prey, doves, doves, turtledoves, bustards, geese barnacles, lombardelle geese, coots, waders, wagons, gray crows, black crows, ravens, alpine choughs, coral choughs, snow peas, grouse, black grouse, white partridges, red partridges, pheasants, francolinis, quails and partridges. Among the reptiles they represent prey: snakes, turtles (which catch and drop from great height on the rocks) and, in the absence of prey available, also lizards and other saurians, but also frogs and toads. Catches can have a weight of around 1.5 kg and when heavier they are hunted in a higher position than the share of the nest.
As for the young born normally one only survives, the first of those born, who collects all the food.
When the male and female of the golden eagle form the couple, they remain faithful to life, conquering a territory and building various nests in the places that, from year to year, they consider more suitable.
The mating takes place in the March period and is preceded by a spectacular ritual, also known as dance of the sky; it is a ritual that goes on for several days and sees both individuals engaged in spectacular aerial evolutions that often the female performs in overturned flight while the male seems to fall on them, with exchanges of prey in flight or turns of death.
After mating, which occurs on the ground, eggs are laid between January, in the warmer areas, and May, in the colder ones. During the period of deposition the male is not present, to reappear immediately to hatching, which takes place after about 43 – 45 days of brooding, to provide food to both the mother and the two children of whom, usually, only one survives.
The eagle’s little ones become eagles after two months and begin to practice flying on the edge of the nest. The first flight occurs around the 75th day and independence is between 160 and 170 days of birth. This is the period when the two parents bring the young eaglets out of the boundaries of their native territory, so they become nomads until, between 3 and 6 years old they will mate to form a new family unit.

Ecological role –
Aquila chrysaetos, in its habitat, plays a large role in regulating the presence of other animals. This role is operated by hunting and containing prey in territories in which, usually, each pair of eagle has its competence.
The regulation of the population of birds of prey occurs with complex and very efficient natural mechanisms, which allow to stabilize the species around the levels compatible with the available local resources (nesting sites, abundance of prey, competition with other carnivores). In this sense, reproduction is regulated which is high in populations below potential environmental capacities and reduced in the most prosperous populations.
The eagle hunts in two ways: in ambush and in flight, usually trying to surprise the prey. Hunting usually takes place in pairs: an eagle flies low to frighten the prey and the other from above tries to capture it. The eagle during the day is very quiet, except in the central part of the day.
The golden eagle pairs operate a territorial control, which ranges from 40 to 180 square kilometers, most of the time, with aerial demonstrations (festooned flights, vaulting) along the border of the territory to signal to the other eagles the actual boundaries . Many eagles have a tendency to move to the warmer areas.