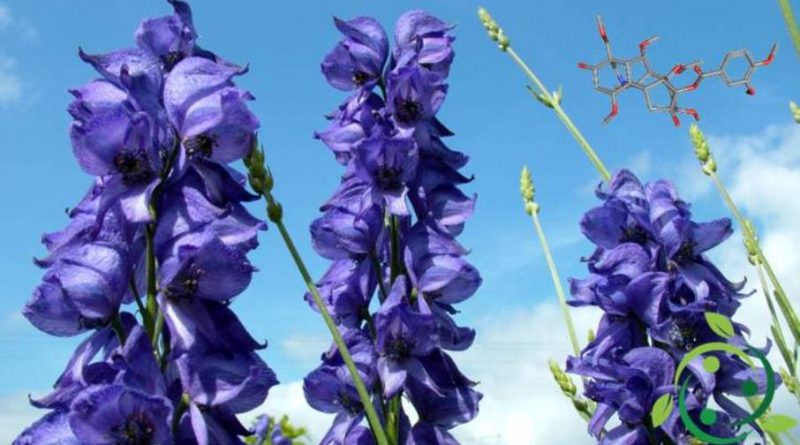 The pseudoaconitin or nepaline, whose brute or molecular formula is C36H51NO12 is a diterpenoid alkaloid (pseudoalkaloide as it is not derived from amino acids) present in some species of the Ranunculaceae family belonging to the genus Aconitum. The IUPAC name is: α, 6α, 14α (E), 16β-20-ethyl-1,6,16-trimethoxy-4-methoxymethyl-3,13-dihydroxyaconitan-8,14-diyl 8-acetate 14- (3 , 4-dimetossibenzoato). It is an extremely toxic compound that is found in high quantities in the roots of Aconitum ferox (plant is known to botanists and travelers from India with the name “Bikh”), also known as Indian Aconite, of the Ranunculaceae family. It is a crystalline substance, of bitter taste, endowed with properties similar to those of aconitin, which melts at 202 ° C and is moderately soluble in water, but more in alcohol, which shows that it is a lipophilic substance.
The pseudaconitin was discovered in 1878 by Wright and Luff.
This molecule is a moderate inhibitor of the enzyme acetylcholinesterase. This enzyme cleaves the neurotransmitter acetylcholine through a hydrolysis mechanism.

The inhibition of this enzyme causes a stimulation of the postsynaptic membrane by the neurotransmitter which can not be canceled. The accumulation of acetylcholine can therefore lead to constant stimulation of the muscles, glands and central nervous system. In addition, the pseudaconitina, in small quantities, also causes a tingling on the tongue, on the lips and on the skin.
Pseudaconitin is also found in other plants, including the aconite napello (Aconitum napellus L., 1753). Aconite toxicity results from the presence of alkaloids, mainly aconitin and pseudaconitin (or nepaline), which are among the most potent plant poisons that exist. They bind to proteins essential for nerve conduction and functioning of the heart. This same plant, however, is used as a medicine in traditional medicines, first of all the Chinese one, which indicates various methods to reduce its toxicity. The species used by Chinese medicine are different from the European ones and are A.kusnezoffii and A.carmichaeli, but their appearance is really similar to our napel. Aconitin is already mentioned in the oldest Chinese herbal medicine book, Shennong Bencao Jing (神农 本草 经), a treatise whose origin is legendary, but whose edition is historically placed between 200 BC and 200 BC.