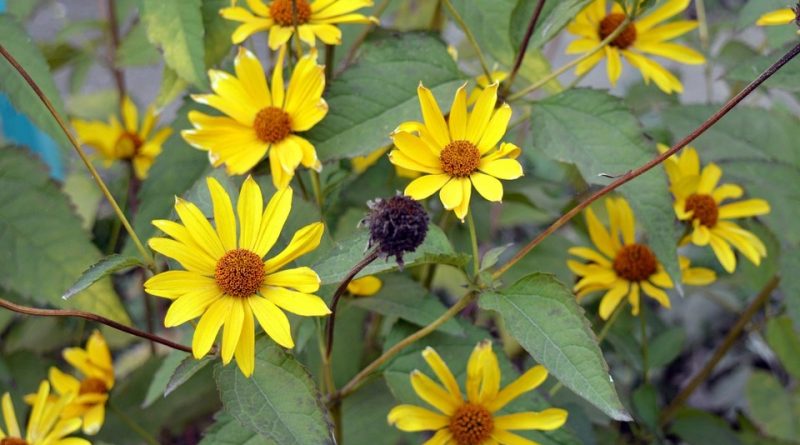 Etymology –
The generic term Helianthus comes from the Greek ἥλιος hélios, sun and from ἄνθος antrum, flower: literally flower of the sun. The specific epithet tuberosus derives from the fact that this plant is endowed with tuber rhizomes.

Geographic Distribution and Habitat –
Helianthus tuberosus is a perennial species of North American origin. Given the high degree of spontaneous diffusion of the plant it is not easy to define what is its original distribution. In Italy, apart from Sardinia, it is present everywhere but it is still a naturalized species. It is found up to 800 m s.l.m .; then it frequents the following vegetational plans: hilly and the plain one – at sea level. It prefers moist soils and near watercourses; but it is also found in megaforbieti and fern populations. The preferred substrate is both calcareous and siliceous with neutral pH and high nutritional values ​​of the medium that must be medium wet. 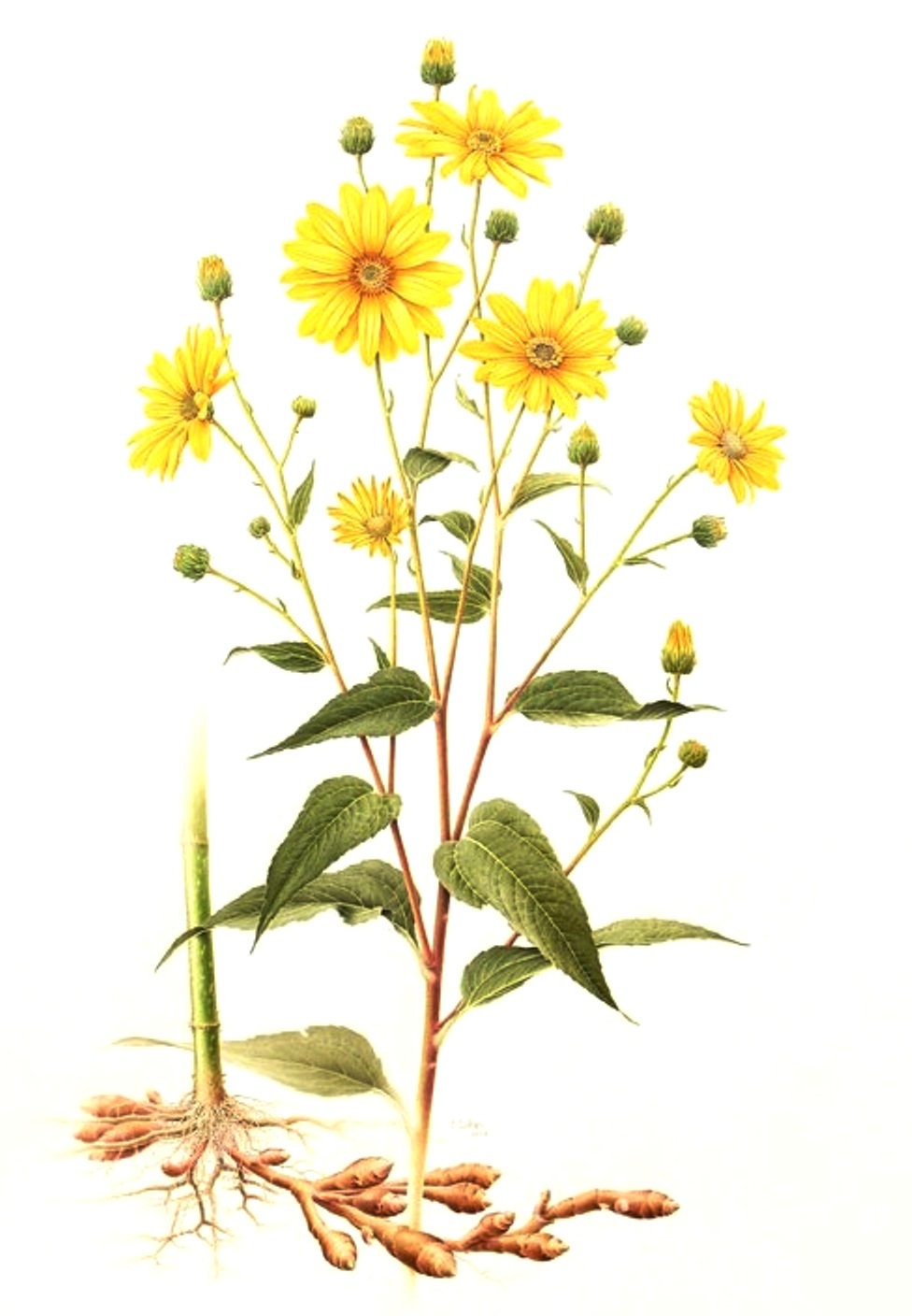 Description –
The Jerusalem artichoke is a herbaceous species that has a root system formed by branched roots with tuber rhizomes. Tubers have a very irregular shape; the stem is erect and long, pubescent; the flowers are yellow, gathered in a terminal flower. The fruit is an achene.

Cultivation –
The Helianthus tuberosus resists cold and heat but prefers temperate-warm climates; it adapts to all types of terrain, both loose and dry and compact and humid. It is a fairly rustic and intrusive species so it should be grown out of rotation or before a weed crop, even if it is itself a renewal plant. The cultivation technique is similar to that of the potato. For the cultivation technique, the following sheet can be consulted.

Uses and Traditions –
Originating from North America, this plant, related to the sunflower, was introduced in Europe at least since the seventeenth century, when the plant spread to our latitudes. At the beginning the Jerusalem artichokes had more luck than potatoes, becoming especially appreciated in times of famine or war.
The Jerusalem artichoke also commonly called tuberous Elianto, for its nutritional characteristics, can be useful in the diet of some forms of diabetes, thanks to the content of inulin as this works as a reserve of carbohydrates (instead of starch) independently of insulin. Inulin consists of a chain of fructose molecules ending in glucose. Depending on the harvesting season the length of the inulin molecules varies and therefore their solubility. The tuber is also rich in mineral salts and in particular potassium, magnesium, phosphorus and iron as well as selenium and zinc. Jerusalem artichoke has always been known to reduce cholesterol and to stabilize the concentration of glucose in blood and uric acid.
The tubers are less nutritious than those of the potato and are badly preserved once extracted from the ground.
According to folk medicine, Jerusalem artichokes (especially tubers) would have the following medicinal properties:
– colagogue (facilitates biliary secretion to the intestine);
– diuretic (facilitates the release of urine);
– stomachic (facilitates the digestive function);
– tonic (strengthens the body in general).

Preparation Mode –
The tubers of Jerusalem artichokes, which are harvested in winter, are very nutritious and their cooking and preparation is very similar to that of potatoes. Unlike potatoes, however, they can also be eaten raw with salt and pepper. In the Piedmontese cuisine they are typical with the bagna càuda and fondue, while in the Sicilian one they find a sporadic use in the filling of focacce.