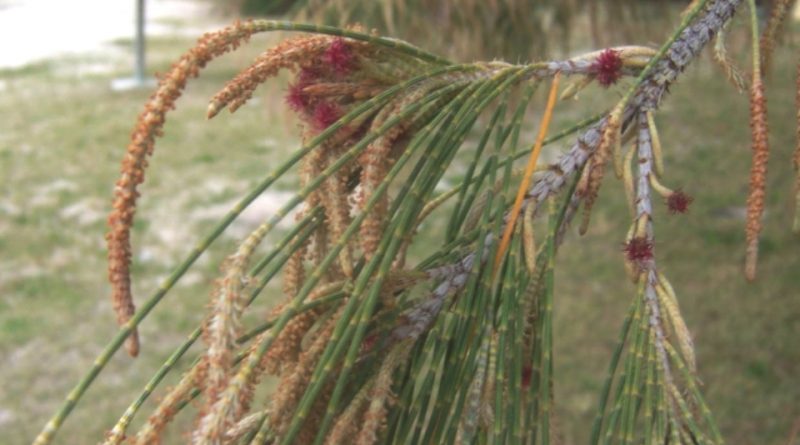 The common casuarina, also known as casuarina of the beaches (Casuarina equisetifolia L., 1759) is an arboreal species belonging to the family Casuarinaceae.

Systematics –
From the systematic point of view it belongs to the Domain Eukaryota, Kingdom Plantae, Division Angiosperms, Class Rosopsida, Sottoclasse Hamamelidae, Order Casuarinales, Family Casuarinaceae and then to the Genus Casuarina and to the Specie C. equisetifolia.

Etymology –
The term Casuarina derives from Casuarius, a cassowary, big bird of New Zealand, because the branches of these plants reminds the beards of the rudimentary wings of the casuari. The specific epithet equisetifolia comes from Equisetum, equisetum and folium leaf, that is, with leaves similar to those of the horsetail.

Geographic Distribution and Habitat –
Casuarina equisetifolia is a species with origins in Indonesia and southeastern Australia. The extension area of ​​the species extends from Burma and Vietnam through Malaysia in the east to French Polynesia, New Caledonia and Vanuatu, and in the south to Australia (Northern Territory, Queensland and New South Wales). This plant is also found in Madagascar, where it is likely to be introduced, which was done in the islands of Hawaii, Mexico, Florida, Puerto Rico, the Bahamas, and many other Caribbean islands, becoming in some cases a species invasive.
Its habitat is that coastal near the sea, mainly on the beaches and coastal dunes, but also on rocky terrain, in marshy environments and near the mangroves.
This species is also present in Italy, where it was introduced as an ornamental plant, naturalizing in Sicily, Sardinia, Lazio and Puglia. 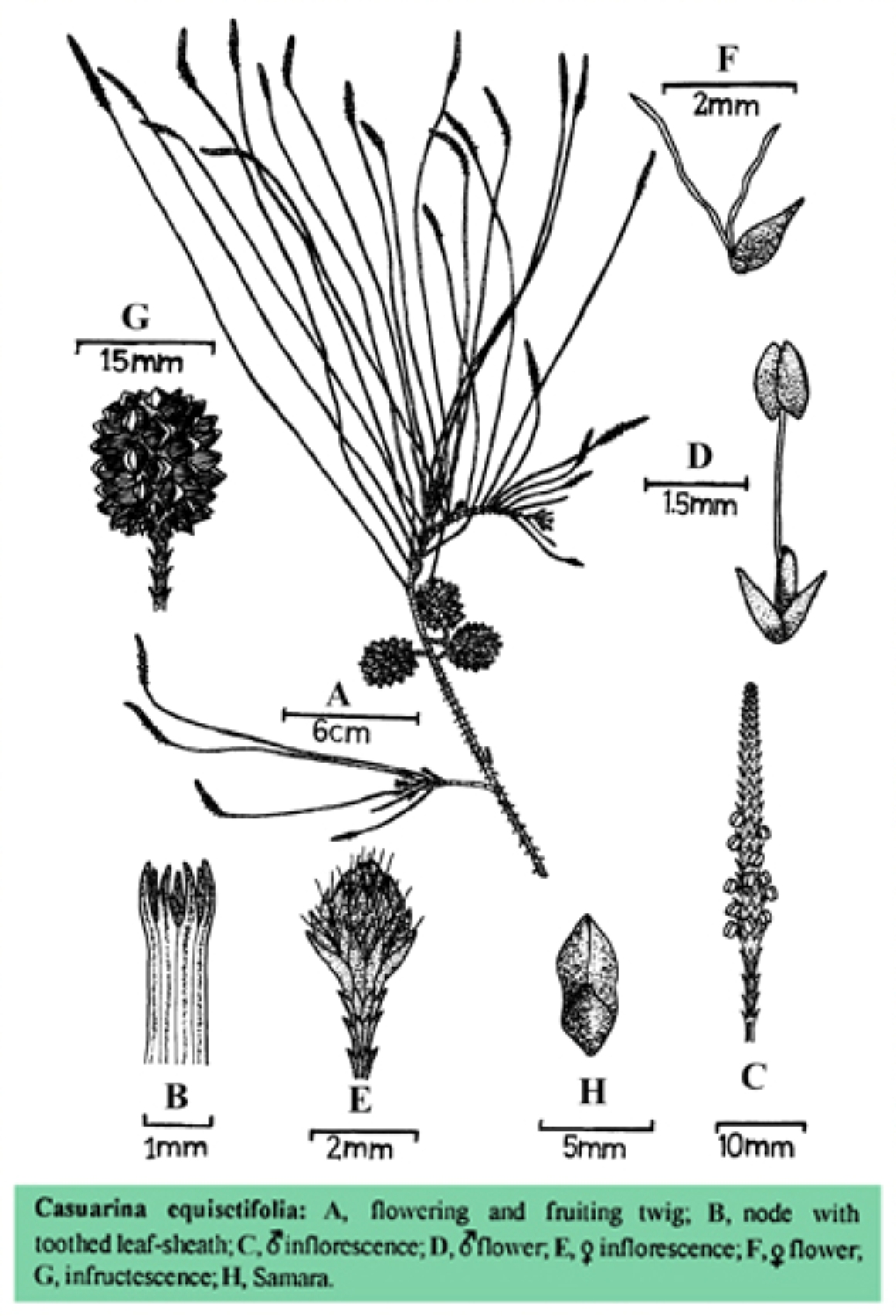 Description –
The Casuarina equisetifolia is a tree that can reach 35 meters and with pyramidal, expanded and dark green foliage. It has a straight and sturdy trunk, covered with a light brown rind, first smooth, then wrinkled and more or less longitudinally brittle. The young twigs have a conformation similar to that of the horsetails (hence the specific name) and the leaves are triangular, acute, whitish of about a millimeter and form regular whorls at the end of each article, at the nodes.
The male flowers are found in terminal spikes with a single stamen from each of the leafy whorls that act as bracts; the female flowers have the same arrangement, but the whorls are compacted to form small globose cones of about one cm. The fruits are woody, similar to pine cones of the conifers, of brown color when ripe; they are made up of small capsules, which at maturity open in two valves, freeing numerous winged seeds.

Cultivation –
The common casuarina is a plant that can represent an excellent pioneer in areas to be re-colonized and as first green barriers. It grows and develops on nutrient-poor soils, thanks to its ability to fix atmospheric nitrogen by the presence in its root actinorrize apparatus: these are radical nodules similar to those found in Fabaceae, which are formed as a consequence of symbiosis with actinomycetes of the genus Frankia. The species grows well even on soils with a high degree of salinity and demonstrates a high tolerability even to transient flooding of the soil. The common Casuarina is a typical plants with warm climates even if it has a moderate resistance to cold as long as it is not too prolonged over time. It is a full sun plant and typical of coastal areas. It can be successfully raised on sandy coasts where, thanks to their important root system, they contribute to keeping the soil stable.
For multiplication it is possible to proceed through cuttings. In the middle or late summer, semi-woody cuttings, 20-25 cm long, should be taken, cut with an oblique cut immediately under a knot. This type of cut is recommended as it allows a greater surface for rooting and avoids the accumulation of water on that surface.

Uses and Traditions –
The Casuarina equisetifolia has been introduced in the temperate-warm climate zones of Europe as an ornamental plant in parks and gardens. In the countries of origin it is used as a pioneer and windbreak plant. The very hard and heavy reddish wood, which gives the nickname of “Iron Tree” to the plant, makes it very well as a fuel to burn. It is also used to build furniture and tools.

Preparation Mode –
The common casuarina has no other uses of alimentary or therapeutic nature.