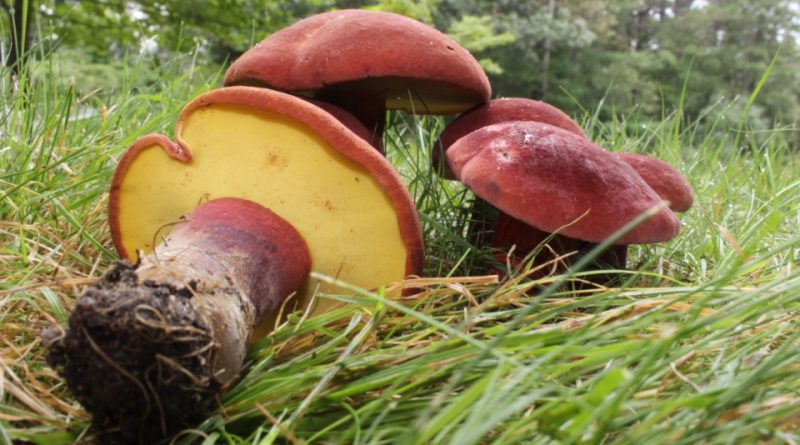 The bicolor Baorangia (Boletus bicolor Peck, 1897) is a symbiotic mushroom that belongs to the Boletaceae family.

Systematics –
From the systematic point of view it belongs to the Eukaryota Domain, Kingdom Fungi, Basidiomycota Division, Class Agaricomycetes, Order Boletales, Family Boletaceae and then to the Genus Boletus and to the B. Bicolor Species.

Etymology –
The term Boletus has a controversial etymology: according to some it derives from the Greek βωλήτης bolétes, with which the Greeks called a kind of mushroom (from βωλος bólos with the meaning of gleba, clod, bush, because growing among the clods or bushy places); others instead believe that the meaning of βωλος is to be extended to the ball, since the hat of most mushrooms is globose; for other still it derives from Bolites, name with which the Romans indicated the best edible mushrooms, even if originally referring only to the ova (Amanita cesarea), but soon used to call in this way also the porcini mushrooms. The bicolor specific epithet comes from bis, twice and cólor, color: two-color, two-color.

Geographic Distribution and Habitat –
Boletus bicolor has a growth area that extends from the south-east of Canada to Florida. It is a common fungus in the mid-western United States, especially in Wisconsin. It is found in deciduous woods, usually associated with oaks but also with chestnut trees, both solitary and in groups, especially between June and October. The fungus is also found in China and Nepal, where it is one of the most frequently consumed mushrooms. 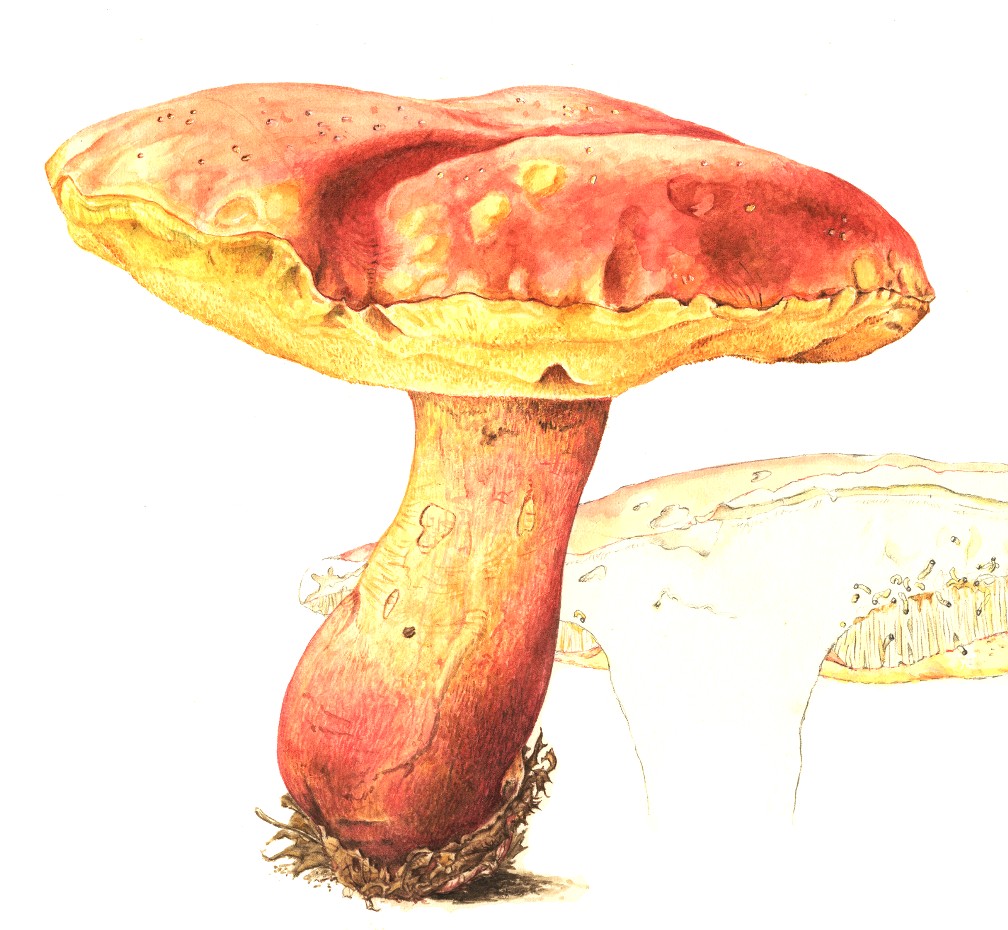 Recognition –
Boletus bicolor is recognized for the 5-25 cm hat, fleshy, convex and then flattened, cheek pads, with irregular bumps; the cuticle is velvety, of a color between bright red and purple-red, soon marked by areolas for widespread withdrawal lacerations, with a lobed margin. The tubules are rather short, yellow with a tendency to greenish for the age, which are stained with gray blue. The pores are concolorous to the tubules, large, polygonal, decurrent on the stem, which mark as a marked reticulation in the upper part of the same. The stem measures 5-11 x 1.5-3.5 cm; it is robust, firm, short and attenuated at the base, yellowish in color but with a marked reddish area. The meat is thick, firm, with a pleasant smell and taste and with a light, bluish color. Microscopic spores in the mass, cylindrical-ellipsoidal, are observed when the microscope is analyzed.

Cultivation –
There is no news of cultivation of this fungus.

Uses and Traditions –
This mushroom was determined and called the term Boletus bicolor for the first time in 1807 by the Italian botanist Giuseppe Raddi. But in 1870, Charles Horton Peck, had with that name a species that he collected in 1870. The name Boletus bicolor (Raddi) is not a synonym of Boletus bicolor Peck, because the first describes a European species in itself; such taxonomic conflict must still be resolved. Later, in 1909, it was instead called Boletus bicolor a species harvested in Singapore, but became a synonym of Boletochaete bicolor.
Boletus bicolor is an edible fungus although in some people it can cause allergies or stomach upset. The taste is very weak but for many, especially in the United States and in the East it is a mushroom even preferred to the Boletus edulis. To understand when this mushroom can be harvested and consumed you have to pay attention to the color of the hat; in fact when it is clear the mushroom is often going through a phase during which it is attacked by larvae; individuals with a dark red hat are less young but can be collected and consumed.
Boletus bicolor can be distinguished from B. sensibilis, which is very similar but poisonous, thanks to the flesh which, if affected, changes color much more slowly.
Of this species there are two varieties: B. bicolor var. borealis and B. bicolor var. subreticulatus. Both present only in America and with slightly different coloring.

Preparation Mode –
The dense and younger specimens of this mushroom have a nice crunchy consistency. The light bluish color, should not impress as it tends to disappear during cooking. It can be prepared and stored as B. edulis is often eaten sauteed, fried, grilled and microwaved with excellent results. Its unique flavor is also not easily lost in complex dishes; it can be mixed with many types of food.
For drying and storage it is an excellent mushroom as it dries and hydrates well.