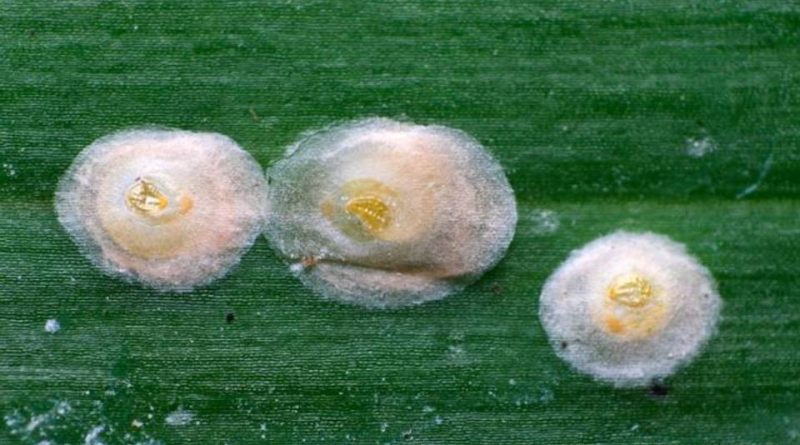 The white lemon cochineal (Aspidiotus nerii Bouché, 1833) is an insect belonging to the Diaspididae family.

Geographic Distribution and Habitat –
The Aspidiotus nerii is an insect present throughout the Mediterranean basin, where it lives on citrus plants and, in particular, lemon, even if, being polyphage species, it also lives on other plants, both outdoors and in greenhouses: olive, aucuba, ivy, oleander, palm, acacia, agave, carob, asparagus, etc.

Morphology –
The white lemon cochineal is a Diaspidide that can be recognized by the color and the shape of the protective shell (follicle) which protects the females and nymphs of 2ª; the follicle is a protective casing made of silk, wax, excrement and exuvia of the previous preimaginal stages. In the female the follicle is roundish, about 2 mm long, with light hazelnut color and yellow exuviae placed in the center. In males, the follicle, which only affects the neanid of the second age, is smaller in size than the female one, is of a net white color and slightly oval in shape.

Attitude and biological cycle –
The Aspidiotus nerii, in a temperate Mediterranean environment, develops 3 or 4 generations per year. The insect spends the winter period in various stages of development with the prevalence, however, of the unfertilized female stage. At the beginning of spring the females are fertilized by the males and begins the laying of the eggs that varies from 50 to 100 units. In the period of May birth of the first generation nymphs occurs, after an incubation period of about 15 days; these leave the maternal follicle and, after a period of mobility of a few hours, fix themselves on the fruits, on the leaves or on the young twigs, starting the trophic activity and starting at the same time the formation of the protective follicle. At maturity, the females start the 2nd generation, with the appearance of the nymphs in the period of July. In turn, the 3rd generation will follow the maturity of the females of the second generation, with the birth of the nymphs in September. With warm autumn temperatures you can also get to the 4th generation.
For the containment of this insect, the following sheet can be consulted.

Ecological role –
The Aspidiotus nerii, particularly active on citrus fruits, and in particular on lemon, generally attacks branches, leaves and fruits, causing, in case of massive infestations, a general deterioration of the plant. this cochineal is found above all on the lower page of the leaves, which can cover for the most part. As a result of these infestations there is subtraction of the vegetable juices of the leaves, which thus take on a more or less intense yellowing, desiccation and phylloptosis.
From an economic point of view the most damaging attacks are those on fruits. In this case the affected fruits are struggling to grow and lose commercial value; in fact, above all on the lemons, the areas surrounding the points of settlement of the cochineals remain green even after the ripening that stand out strongly on the ripe fruit. In these conditions there is a decreased commercial value of the fruits with consequent depreciation.
To reduce the intensity of the population of these insects for too long it was decided to limit them with the chemical fight with treatments based on white oils to 1-2%, to the appearance of the mobile neanides, alone or in conditions of massive infestations, with addition of phosphoric esters.
The solution is instead of agroecological nature. The remedies consist in the decrease above all of the fertilizations based on nitrates that generate an excessive softening of the tissues of the plants that become particularly appetite to these insects. Even the correct pruning, with aeration of the internal part of the plant and the density of the plant play a fundamental role. Citrus or other plantations with narrow and excessively specialized plants set the conditions for a difficult control of the biocenosis of these cochineals.
Also the grassing and the presence of a vegetational biodiversity (hedges, borders, different trees, etc.) help to create the conditions to host the populations of the parasitoids and predators of the Aspidiotus nerii.
Like other organisms, this plant is limited by numerous parasitoids and predators among which we include several Coccinellida Coleoptera, such as: Chilocorus bipustulatus, Exochomus quadripustulatus, Lindorus lophantae and Scymnus spp. Among the parasitoids we remember the Hyaluronic calcidoid hymenopterans such as Encarsia citrina (syn .. Aspidiotiphagus citrinus), and Aphytis spp. ectofagi.