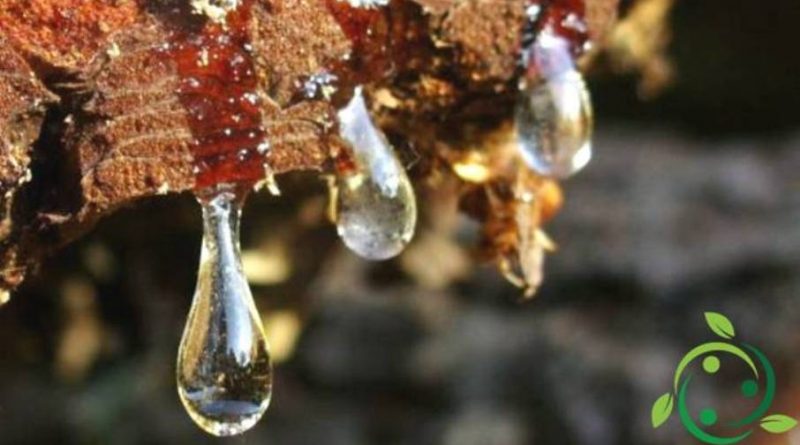 Turpentine is an oily, fluid, clear, and volatile vegetable resin. The term turpentine derives from the Greek terebinthos, terebinto a tree from whose sap the turpentine was originally distilled.
Turpentine, also known as oleoresin, can also be obtained from the incision of the bark of various species of conifers. By distillation with not overheated water or steam it gives rise to a solid part, called rosin, consisting of resin acids, and to a volatile oil, essentially composed of terpenes (among which generally prevails pinene), in different proportions depending on the plants of origin, also called turpentine or better essence of turpentine or white spirit (this last name is sometimes reserved for the raw product, while turpentine oil is also called the essence of redistillated turpentine.
Turpentine is a vegetable resin that is volatile, fluid and oily. It is extrapolated from the trunk of trees of the pinophyta family by making incisions on the bark. This incision can be done both on the trunk of the living plant and in the heartwood of the dead plant.
Another tree, as mentioned, which gives the turpentine is widespread throughout the Mediterranean is the Terebinth (Pistacia terebintus). This tree was already known at the time of ancient Greece and from this was obtained the Turio turpentine, while in more recent times, in the eighteenth century, the southeastern part of the United States hosted the largest production.

The turpentine harvest took place in the summer months between July and September, through the incisions on the bark. This substance was used in the past for healing purposes, thanks to its balsamic properties, on accesses, dermatitis and wounds. It has also been used to treat calculi, arthritis and sciatica.
In the usual jargon the liquid turpentine that oozes from the trees is called a gem, while that hardened barras and gallipot.
The turpentine contains in greater measure terpenes, higher alcohols and resin acids; these resins take the shape of the container that contains them, although they are solid at room temperature; moreover they have a high solubility in most organic solvents as well as in alcohol. The composition is varied; for example, for what is obtained from the Mediterranean pine is the following: α-pinene (95%); sesquiterpeni (3-4%); DL-bornilacetato.
The main uses of turpentine are those for the production of soaps, paints, glues for adhesives, inks, lubricants, sealing wax, as a stain remover for paint stains and much more.
In the past it was also used to prepare the masks that the theatrical actors had to wear.
The main derivatives extracted from turpentine are:
– the essence of turpentine;
– the rosin
– essential oils, containing α-pinene, which is isomerically different depending on the location of the plants from which the turpentine comes; levitated for the European ones, right-handed for the American ones.
Depending on where the turpentine is extracted, different product qualities can be obtained. Among the various remember:
– Burgundy turpentine, obtained from the spruce;
– turpentine turpentine, obtained from white fir;
– Venice turpentine, which is obtained from the common larch;
– Italian turpentine, obtained from maritime or domestic pine.