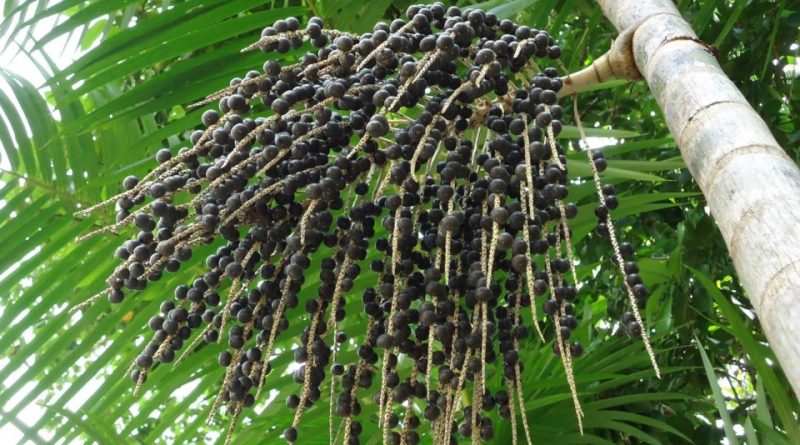 The açaí, whose Chinese name is 蔬食 埃塔 棕 (Euterpe oleracea Mart.) Is a plant belonging to the Arecaceae family.

Etymology –
The term of the genus Euterpe derives from a Greek mythological name of one of the nine goddesses of the liberal arts. The specific epithet oleracea comes from the Latin and means vegetable, referring to the heart of the stem, which is eaten as a vegetable.
The common name Açaí derives from the Portuguese adaptation of the indigenous word ïwaca’i, which means “[fruit that] cries or expels water”.

Geographic Distribution and Habitat –
The Euterpe oleracea is a plant mostly native to Brazil, Trinidad, Ecuador, Venezuela, and French Guiana. Its habitat is that of alluvial zones and the margins of bodies of water but in soils with good drainage as it does not grow well in areas where there is stagnant water. In its optimal habitat the average annual rainfall is about 2300 mm with an average annual temperature of 26 ° C. It often resists a short dry season of about 2 months. In some parts of the Amazon basin it can grow in almost pure populations. Today it is very common in the Amazon rainforest in Brazil and is widely cultivated in the plains of the Amazon estuary for its use as a food product. 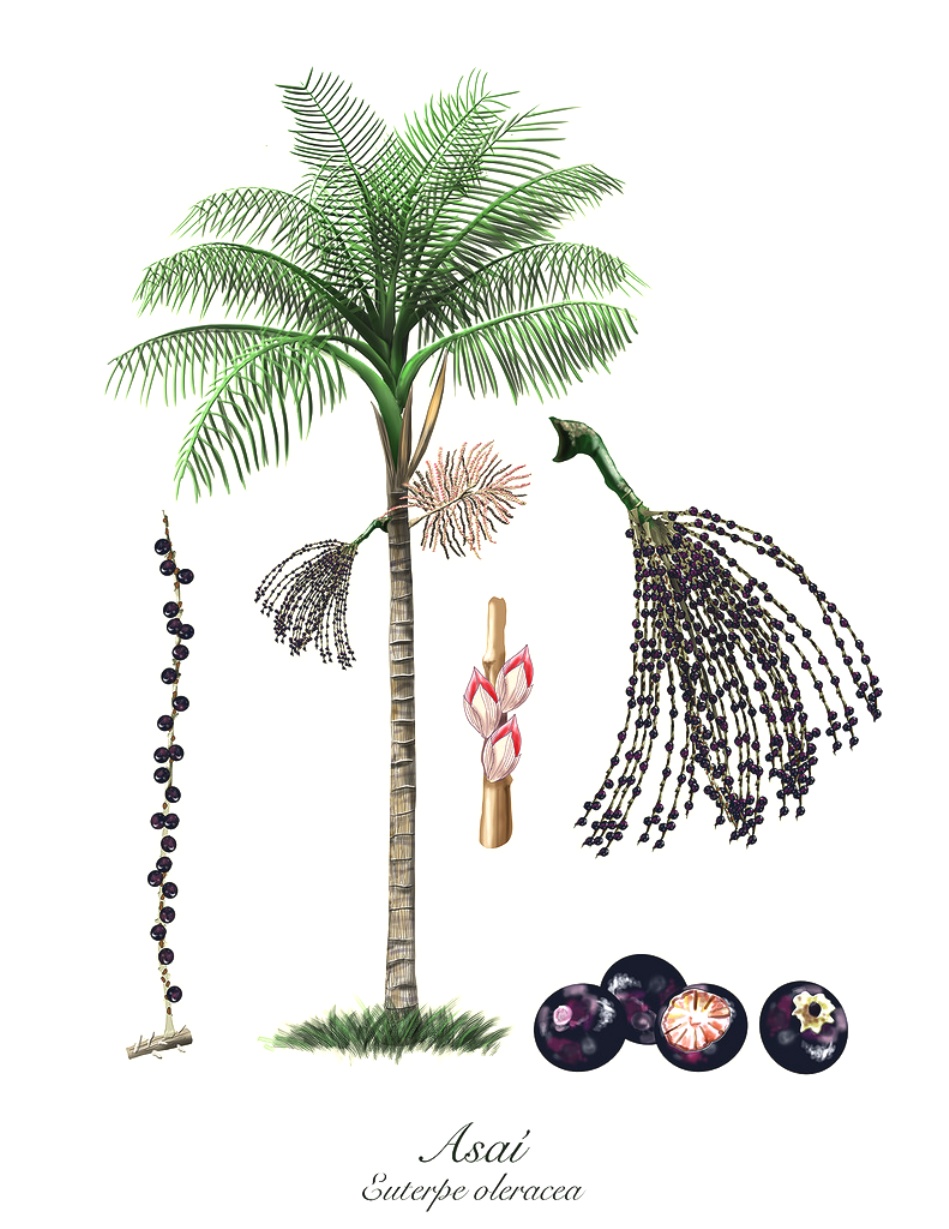 Description –
The Euterpe oleracea is a plant up to 25 meters high but can even reach 30 meters. It is a tall palm, slender, moderately fast growing, sometimes solitary, with numerous thin stems with which some are dominant while others, like suckers, around the base. The trunk is isolated or agglomerated, smooth, up to 15 cm in diameter, gray, marked with rings of old foliar scars. The foliage is composed of a feathered (feather-shaped) frond, about 2-3 m long; leaflets 50 cm long and 4 cm wide. The fruits are globose, about 1.5 cm in diameter, fibrous, with maturation from green to purple-black, with a single seed. The flowers are in ramified inflorescences, about 1 m long, cream, which are formed under the leaves; the female flowers are about 2 or 3 times larger than the male flowers. Pollination is entomophilous through small bees, flies and beetles. The transport of seeds over short distances is carried out by rodents. Long-distance seed dispersal is ensured by birds and passively by water.

Cultivation –
The açaí is cultivated for its fruits (which are the berries of açaí or simply açaí), for the hearts of palm, for the leaves and the trunk of wood. It is a plant that grows well both in full sun and in partial shade, but requires shelter when young. It needs a constantly warm and humid environment with a constant amount of water. It thrives in rich, moist and well-drained soils. It propagates by division of lateral shoots or seeds, which germinate within 2 or 4 months.
In the areas of production there are two crops: one is normally between January and June, while the other is between August and December. The last harvest is economically the most important.

Uses and Traditions –
The importance of this fruit as staple food in the delta of the Amazon River gave rise to a local legend from which the plant would then take its name. Legend has it that the chief Itaqui ordered that, due to a period of famine, all newborns were put to death. When the daughter gave birth and the child was sacrificed, she cried and died under a newly sprouted tree. The tree fed the tribe and was called açaí in memory of the daughter’s name (Iaçá) but written backwards.
The berry of this plant, to which are attributed therapeutic properties, contains dietary fiber, vitamins A, B, C, E, mineral salts, metals, phytosterols, antioxidants and monounsaturated fats.
The growing international demand for acai revolves around pressing advertising campaigns on the alleged therapeutic virtues of these fruits, which are actually based on a limited number of scientific studies, so much so that an article published in the journal Phytochemistry Letters and taken up in a Nathan Gray’s March 2011 article, underlined that, by evaluating the available scientific literature, açaí does not seem to have such high levels of antioxidants as propagandized, although according to some studies they show that the fruit has up to 33 times more antioxidant content than red wine grapes.
Acai oil which is green in color, has a sweet aroma and a high content of fatty acids, oleic and palmitic and is rich in phenolic compounds such as vanillic acid, syringic acid, p-hydroxybenzoic acid, protocatecuic acid and ferulic acid; catechins and numerous oligomers of procyanidins also abound.
Among other things, this growing demand has followed a series of scams. In 2009, açaí scams were ranked first on the US FTC list, so that in 2011, sales of açaí dropped considerably due to the decline in population popularity.
The fruit is much appreciated in the eastern Amazon as an addition in wine or as juice, the juice is extracted from the fruit by dipping the seeds in water to soften the thin outer layer, then it is squeezed and filtered to collect a dense violet colored liquid a unique flavor.
From the medical point of view, the extracted pulp would have anti-inflammatory activity, stimulate the immune system and, according to some studies, it would have anti-tumor activity.
The leaves can be used to create hats, mats, baskets, brooms and for making straw roofs. The wood of the trunk is resistant to pests, therefore excellent for building construction. The seeds can be ground for livestock feed or as an organic soil improver for plants. The seeds can become waste in landfills or be used as fuel for the production of bricks. Tree trunks can be processed to produce dietary mineral salts.

Preparation Mode –
The açaí is used by the Indios to produce palmito. The syrup is also used as variegated on yogurt ice cream. The liquid is served cold with sugar and tapioca flour. The juice can be transformed into ice cream, liqueur, mousse and desserts in general. Even the fruits can be eaten raw. The seeds of the Acai berries are a rich source of fats. After pressing, they can give rise to Acai oil.
It can be used for cooking, as a condiment on salads, in cosmetics or detergents such as shampoos, soaps and moisturizing creams of the skin.