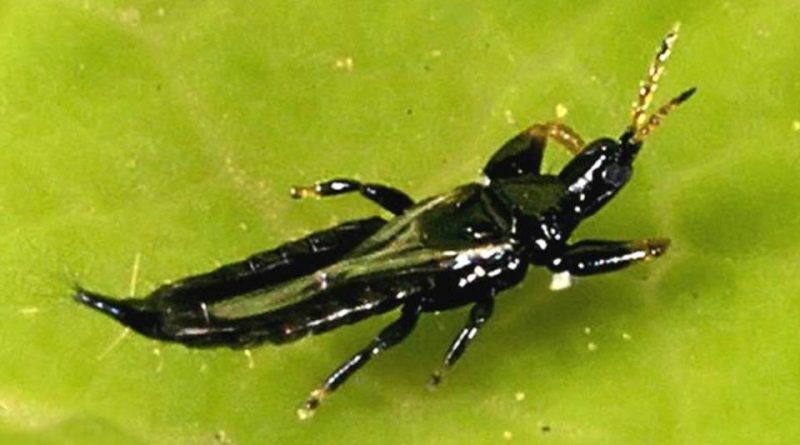 Geographic Distribution and Habitat –
Tripidi dell’Olivo is a common species in the olive-growing areas of the entire Mediterranean basin and its diffusion corresponds with the olive growing area.

Morphology –
The adult of the Liothrips oleae has a length of about 1.2-2 mm; It has a bright black body and fringed wings. The antennae of this insect are made up of 8 segments. The young nymphs are straw-yellow in color and are very mobile. The buccal apparatus is pungent sucking.

Attitude and biological cycle –
This tisanottero plays a role of significant agricultural interest due to the considerable damage it often causes to olive crops, especially in Italy, Spain and Greece. The biological cycle is characterized by the adult that winters in the chapping of the bark, especially the adult olive trees but also in the lesions and scars of the cuts of pruning or in the body of parasitized cochineals. In early spring, when temperatures exceed 15-18 ° C, adults go out and at the same time females start oviposition; these lay up to three hundred eggs, from which after a few weeks the nymphs start to feed on the tender parts of the plant. from the neanidi grown into adults, a second generation is born that, in southern Italy corresponds to the middle of June), and a third generation between late August and early September, from which usually adults will fall in autumn. In vintages with particular conditions of high humidity and temperature, the triplex of the olive tree can also perform a fourth generation.

Ecological role –
The first damages of this insect occur on the softer apical shoots and then spread on the flowers and on the fruits. The damages, which in certain climatic and agronomic conditions, may be considerable, are due to the trophic bites of both the adult stage and the nymphs.
The shoots that have been affected by this trophic activity are characterized by a stunted development and twine on themselves; the leaves take on typical hook shapes and go towards an early fall. The attacks on the flowers cause abortion and dripping while on the fruit you have the early fall, deformations, hollows and brownish spots. Furthermore, micro-organisms can penetrate inside the bites with further deterioration and aggravation of the damage.
In good agronomic conditions and in companies conducted with good criteria of agroecology, the Liothrips oleae is controlled by entomophagous antagonists, among which the Anthocoris nemoralis (rincote) and the Tretrastichus gentilei (hymenoptera); to avoid, however, sudden increases in population, due to sudden variations in weather conditions, favorable to this insect, careful monitoring must be carried out from the first spring generation.
The interventions to contain this insect mainly concern the need for a good grassing of the olive grove, the presence of hedges and shrubs that can host the antagonists, through pruning in order to thin out the foliage and avoid the settlement of the insect. The specialization of olive groves creates favorable conditions for this insect, so that, in the long run, they become uneconomical and anti-ecological.
In extreme cases you can intervene with products based on pyrethrum (permitted in organic farming) but it is a practice that must be done with such timing as to damage to a minimum the presence of the entomofauna useful as that of the pollinators and its antagonistic insects.
The indicative intervention threshold is 10% of sprouts infested in the first generation.
Furthermore, a control of the Fleotribo must be carried out, in the tunnels of which the Tripide finds a safe and easy winter shelter and a suitable place for oviposition.