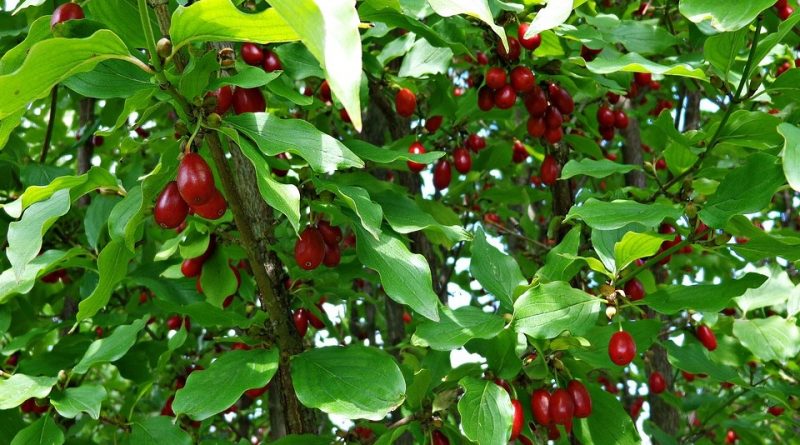 The dogwood (Cornus mas L., 1753) is a fruit tree species, spontaneous, belonging to the family Cornaceae.

Systematics –
From the systematic point of view it belongs to the Eukaryota Domain, Kingdom Plantae, Magnoliophyta Division, Magnoliopsida Class, Cornales Order, Cornaceae Family and therefore to the Genus Cornus and to the Species c. mas.

Etymology –
The Cornus terace derives from the Indo-European root kar, being hard, passed to the Latin cornus horn, to emphasize the hard and robust wood. The specific epithet mas comes from mās, male măris, masculine: term used to define a robust species compared to other more delicate, defined female.

Geographic Distribution and Habitat –
The dogwood is a native species of central-eastern Europe up to the Caucasus and to Asia Minor; in Italy it is found in almost the whole peninsula, but it is more frequent in the northern regions and is only missing in the islands. This species is found mainly on calcareous soils, and lives in small groups in the clearings of the deciduous forests, between the shrubs and in the hedges of the plain up to 1300 (even 1530) meters. 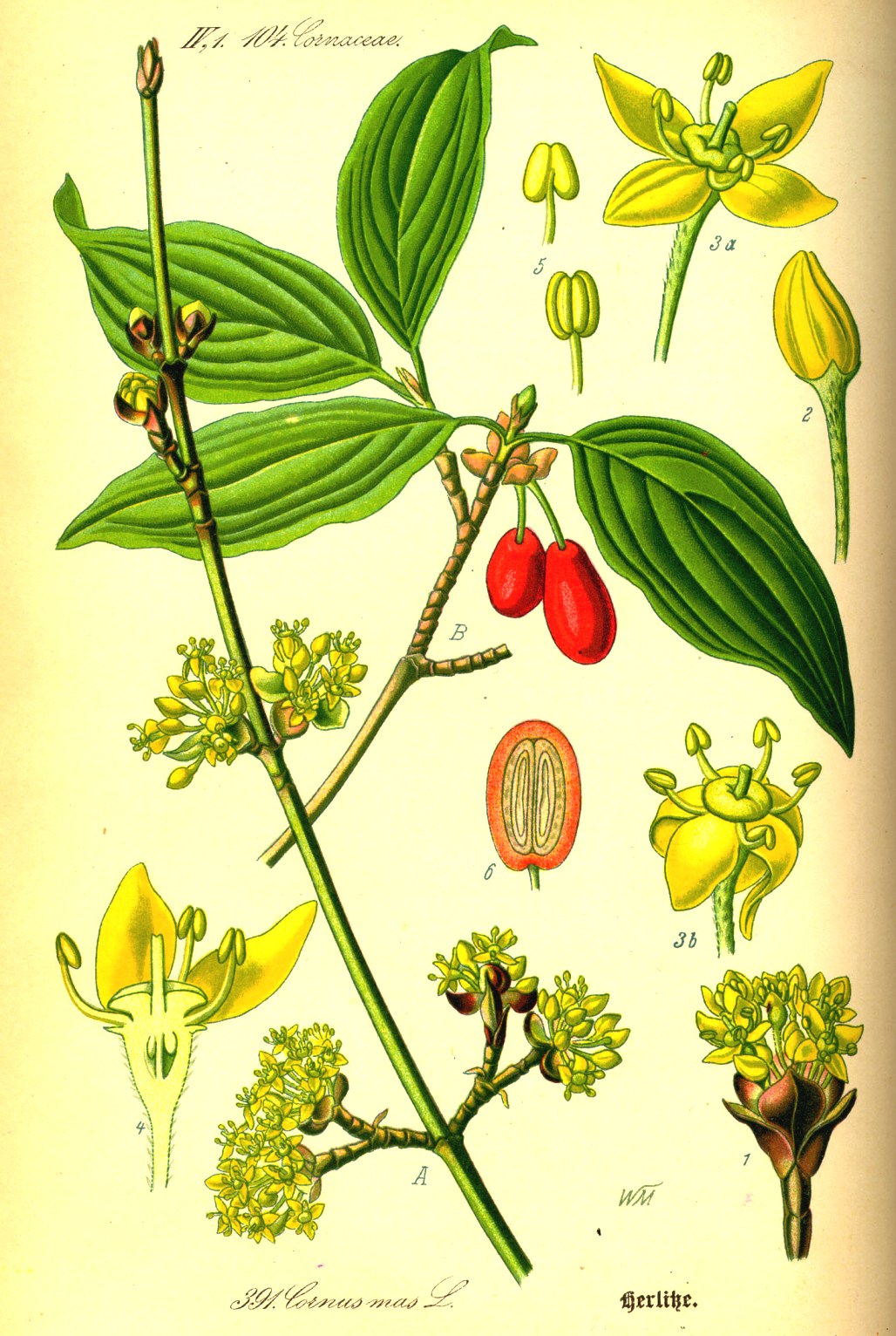 Description –
The Cornus mas is a tree tall from two to six meters and exceptionally can reach 8 m; the old rind of this tree, grayish yellow, comes off in small ocher or brownish scales especially at the base of the stem. The leaves are opposite, petiolate, oval and elliptical, acuminate on top, deciduous, with veins converging towards the tip and have dimensions of 4-10 cm in length. The flowers that appear before the leaves are yellow and very small with dimensions of 4-5 mm, with separate sepals, gathered in sessile umbrellas surrounded by 4 bracts in the cross. The fruits of the dogwood are bright red drupes, which when darken become darker and almost 2 cm long.

Cultivation –
The cornel can also be cultivated as an ornamental plant in orchards and gardens, and for its edible fruits. There are different varieties with red or yellow fruits, more or less large. It is a very rustic shrub that does not fear the late frosts and resistant to the attacks of many diseases. For the cultivation technique, the following sheet can be consulted.

Uses and Traditions –
The wood of the dogwood is a very hard wood with a light brown color in the inner parts (sapwood), while in the bark it is reddish and with little distinct rings. It is the hardest wood in Europe, very resistant, which is also used for the production of pipes. In the past it has been used in the past for the manufacture of machine parts subject to heavy wear (eg spokes and wheel gears), for lathe work and other particularly resistant tools.
The whole plant has dyeing properties (yellow) and is also a medicinal essence, for the tonic-astringent action of the fruits, against enteritis, in the treatment of skin diseases, joint pains and metabolic disorders. In addition, once the roots, bark and shoots were used to treat fever with similar action to the wood of china. In cosmetics, the pulp is used as an astringent for oily or seborrheic skin.
Cornus mas is used as an ornamental plant in parks and gardens, for its bright leaves and the myriad of very early-opening yellow flowers. In addition, the fruits are highly sought after by wildlife.
For the members of the Serbian Orthodox community this plant has a sacred value. They collect the seeds on Christmas Eve (celebrated according to the Julian Calendar, ie January 6); in the morning, as soon as they get up, they consume them with a sip of red wine, making the sign of the cross and wishing to stay healthy all year round. The dogwood itself is considered a symbol of good health, in fact the popular saying “Zdrav kao dren” literally means “Sano as the dogwood”. Also the famous Trojan horse was made with the wood of the dogwoods of a sacred wood to Apollo located on Mount Ida.

Preparation Mode –
In the food field, small red fruits are used, as well as for the production of fruit juices and jams (excellent as an accompaniment to boiled meat), also to flavor some types of alcohol, such as, for example, grappa. The fruits can also be eaten fresh, but it is better to taste those just fallen or those that come off the stem with a light touch of hand, that is when they are fully ripe. Fruits can be preserved under alcohol (like cherries) and in brine (like olives).