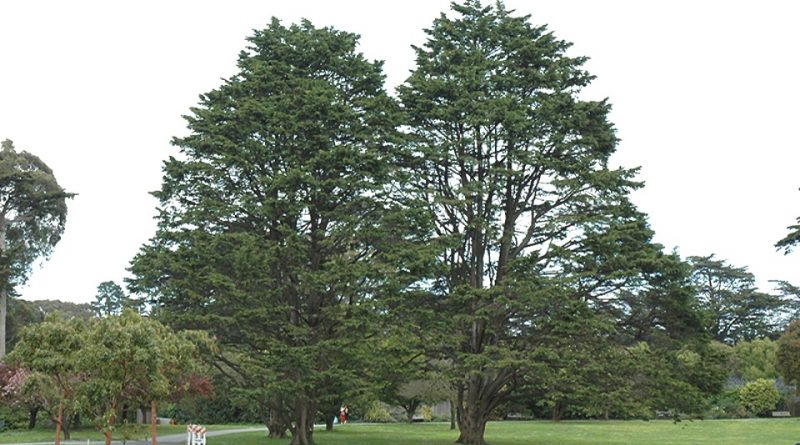 Systematics –
From a systematic point of view it belongs to the Domain Eukaryota, Kingdom Plantae, Subarign Tracheobionta, Superdivisione Spermatophyta, Division Pinophyta, Classe Pinopsida, Order Pinales, Family Cupressaceae and then to the Genus Cupressus and to the Specie C. macrocarpa.

Etymology –
The term Cupressus comes from cupréssus, Latin name of the common cypress, derived from the Greek κῠπάρισσος cypárissos, in turn of non-Indo-European origin: perhaps from Akkadian kapárru-ísu balance-tree, or from the Hebrew gopher tree name the whose wood was used to build the Ark. The specific epithet macrocarpa comes from the Greek μακρός macrós long, large and from καρπος karpos, fruit.

Geographic Distribution and Habitat –
The Cypress of Monterey is a native species of California (specifically of the Bay of Monterey), where it is located along the rocky slopes and overgrown exposed to the sea, in association with evergreen oaks. It was introduced into the European continent around the mid-nineteenth century for use as an ornamental plant for parks and gardens. 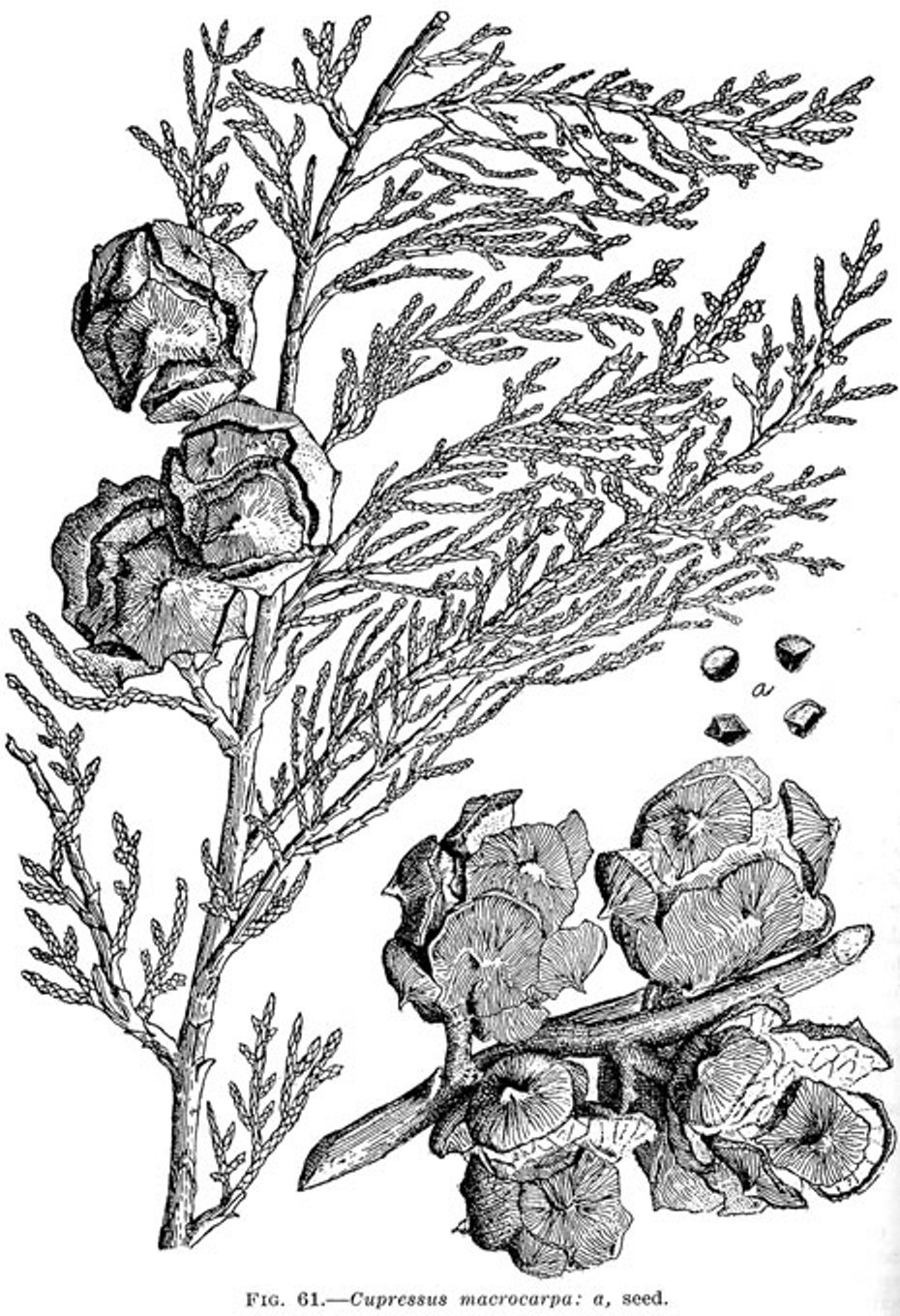 Description –
The Cupressus macrocarpa is a tree that can reach 20 meters in height, with first conical foliage and then expanded and irregular up to assume in the older specimens an umbrella carriage, with branches forming horizontal flat and spaced stages. The trunk is at first straight and then over time becomes more or less oblique, twisted and gnarled and with the enlarged base; the rind is white-greyish or light hazel, with thick vertical grooves. The leaves are persistent and squamiform, strictly thickened to the branches that give off a citrus scent if rubbed. It possesses male flowers in terminal position in the small, conical and yellowish twigs and the female flowers of a roundish conformation single or grouped in two. The fruit is a globular or ellipsoidal galbulo of dark brown color with a maturity of 2.5-4 cm of diameter, with 4-6 scales with relief in the central area.
We remember two varieties, which are:
– Cupressus macrocarpa cultivar Goldcrest;
– Cupressus macrocarpa cultivar Wilma.

Cultivation –
Cupressus macrocarpa is a plant that prefers loose and well drained soils. The plant can be exposed in full sun or shade, the important thing that has good light throughout the day, and that is repaired, during the youth, by strong winds. In the early stages of life, plants need protection where temperatures fall below zero. For details of the cultivation technique, see the following sheet.

Uses and Traditions –
The Cypress of Monterey is widely used as wood essence, thanks to the rapid growth and the excellent quality of wood (aromatic, fine-grained and yellowish).
Its wood has many uses also craftsmanship for the construction of boats, furniture; among other things, because of its fine colors and a decorative wood. The wood of this plant is also used as firewood giving fast and crackling flames.
In addition to being an ornamental plant, in Europe it has also been used in reforestation of the Mediterranean coastal areas thanks to its resistance to winds and saltiness. In the leaves of this plant is isocupressic acid, a diterpenoid labdanum, which is an abortifacient component. In addition we find monoterpenes (α- and γ-terpinene and terpinolene) that make up the essential oil of the foliage, which is very volatile enough to be perceived to rub them.
Due to its components, the foliage is slightly toxic to livestock and can cause abortions in cattle.
In Australia and New Zealand Cupressus macrocarpa is often cultivated as a windbreak tree on farms, usually in rows or safety belts. It is also used in New Zealand as an ornamental tree and, occasionally, as a tree for use of its timber.

Preparation Mode –
in addition to its ornamental uses and its wood, Cupressus macrocarpa has no other food or therapeutic uses.