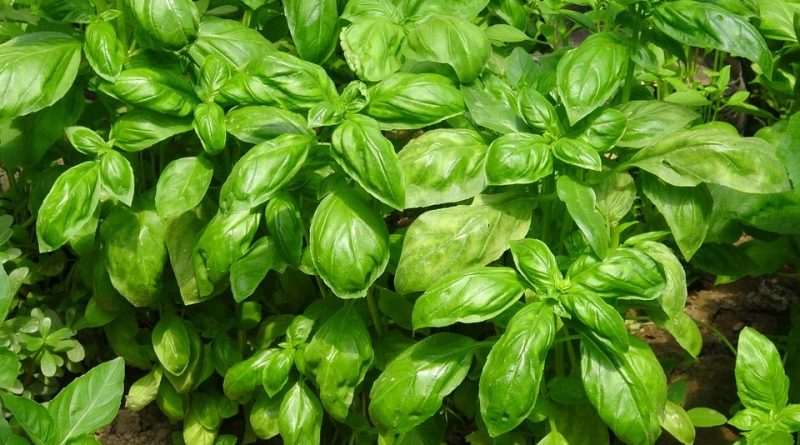 The basil (Ocimum basilicum, L., 1753) is an aromatic annual herbaceous species of the Lamiaceae family.

Systematics –
From the systematic point of view it belongs to the Domain Eukaryota, Kingdom Plantae, Magnoliophyta Division, Magnoliopsida Class, Order Lamiales, Family Lamiaceae and therefore to the Genus Ocimum and to the Species O. basilicum.

Etymology –
The term Ocimum comes from the Greek ὤκῐμον ócimon, basil; this in turn derives from ὄζω ózo to smell, to give off an odor: due to the characteristic scent of the plant. The specific epithet basilicum derives from the Greek βασιλικός basilikós, ie regio, regal, worthy of a king, from βασιλεύς basileus re.

Geographic Distribution and Habitat –
Basil is native and wild in tropical Asia and India. It spread from the Middle East to Ancient Greece and Italy from the time of Alexander the Great, around 350 BC. Its cultivation began only in the sixteenth century and then spread to England and, with the first migratory expeditions, to the Americas. 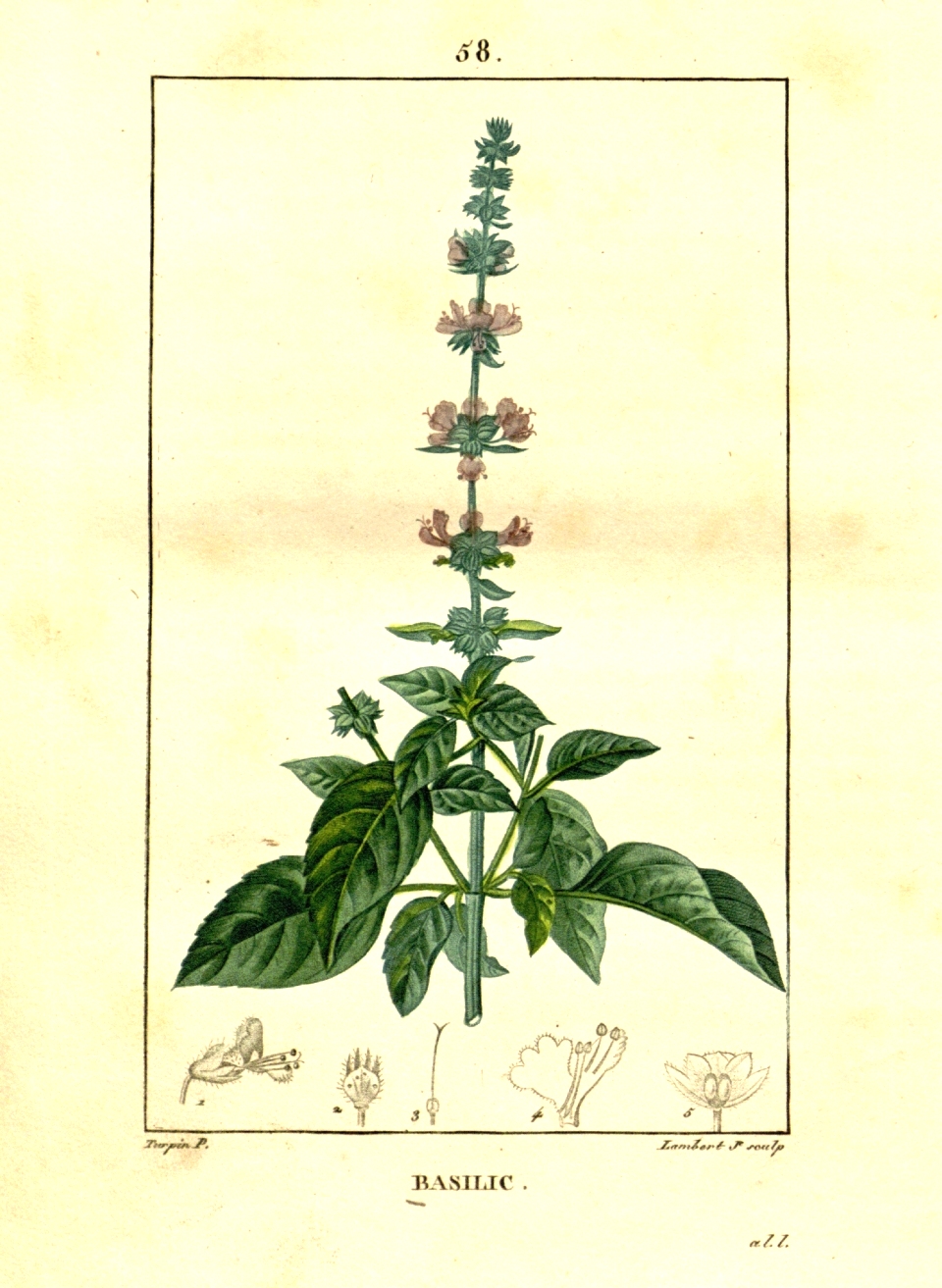 Description –
Basil is an annual herbaceous species up to 60 cm tall; the leaves are opposite, oval, lanceolate, in certain bullous varieties, 1-6 centimeters in length, with a color ranging from pale green to deep green, or purple – purple in some varieties. The stems are erect, branched and with a square section like many of the Lamiaceae, with a tendency to become woody and leafy. The flowers, which are grouped in inflorescences at the axils of the leaves, are small bilabiata, white or pink and have a corolla composed of 5 irregular petals. The stamens are 4 and yellow. The seeds are fine, oblong and black.

Cultivation –
For the cultivation of this species it should be noted that around 60 varieties and cultivars of Ocimum basilicum have been classified, which differ in their appearance, aroma and pedoclimatic adaptability. However it is a plant cultivated in most of the temperate climates of the world it is growing well in areas with good sun exposure and with temperatures between 20 ° C and 25 ° C. At higher temperatures it needs a higher humidity, and does not withstand temperatures below 10 ° C. this plant requires frequent watering, but with a well-drained soil, as the stagnant water is harmful to the roots.
It can be grown both in the gardens and in the pot. For the specific cultivation technique, the following sheet can be consulted.

Uses and Traditions –
Basil is used in Italian cuisine and in Asian cuisines in Taiwan, Thailand, Vietnam, Cambodia and Laos, due to the marked fragrance of its leaves, which depending on the variety can be more or less sweet or pungent.
This plant is also used as a medicinal species: the leaves and flowering tops are used to prepare infusions with sedative action, antispasmodic of the digestive tract, stomachic and diuretic, antimicrobial, anti-inflammatory. Basil is also used against indigestion and as a vermifuge. It can be used as a mouthwash against inflammation of the oral cavity. From the basil an oil is extracted that is used for bruises or rheumatism.
Its essential oil is also used for the preparation of perfumes and liqueurs; from the distillation of the fresh plant an essence containing eucalyptol and eugenol is obtained.
In history, basil has not distinguished itself as a food but as an element in the widespread superstitions among the peoples of Asia, the Middle East and the Mediterranean. As a food use we find the basil in literature only from the end of the eighteenth century. Nineteenth century explorers reported having met several species of Ocimum in Africa, Persia and Tropical Asia, either native or cultivated.
Among the ancient Egyptians and Greeks, basil had the auspicious symbol for the afterlife; in fact it was used for the embalming. The Chinese and the Arabs knew their medicinal properties, while the Crusaders filled their ships to hunt insects and bad smells. To confirm this, a 1989 study on essential basil oil shows that the plant has fungicidal and insect repellent properties. A similar study from 2009 confirms that plant extracts are very toxic to mosquitoes.
At the Greeks and Romans basil was considered a diabolical symbol of misfortune and hatred. Pliny the Elder attributed to the plant the ability to generate states of torpor and insanity, while according to Chrysippus it could be harmful to the stomach and the liver. The ancient Romans associated him with the mythological figure of the basilisk, a snake-shaped creature capable of killing with his eyes: the basil would serve as an antidote to his poison. An African legend also maintains that basil protects from scorpions.
In the Middle Ages it was used to heal from wounds and was a vulnerable water ingredient, once used for external applications. For others it was considered poisonous.

Preparation Mode –
The basil is used in the kitchen for the preparation and flavoring of various dishes. Suffice it to mention all the Genoese Pesto, where the fresh basil is crushed with a pestle in the traditional mortar. To keep its aroma intact, the basil must be used fresh and added to the dishes at the last moment. Cooking quickly attenuates the flavor to neutralize it, leaving little of its scent.
It can be dried but almost completely loses its flavor. In the refrigerator it can be stored for a few days, wrapped in a kitchen towel. In the freezer, on the other hand, flavor and aroma are preserved for several months.
Basil is used to flavor salads, especially with ripe tomatoes, or zucchini, garlic, seafood, fish, scrambled eggs, chicken, rabbit, duck, rice salads, soups, pasta and tomato sauces.
Even in Asian cuisine, especially in Taiwan, it is used a lot and frequently in soups. Whole leaves accompany fried chicken or are used to flavor milk and creams.
Because of its predominant aroma, the basil is difficult to combine with other aromatic herbs such as thyme and rosemary, while it can be paired with parsley and mint in some Sicilian pests.