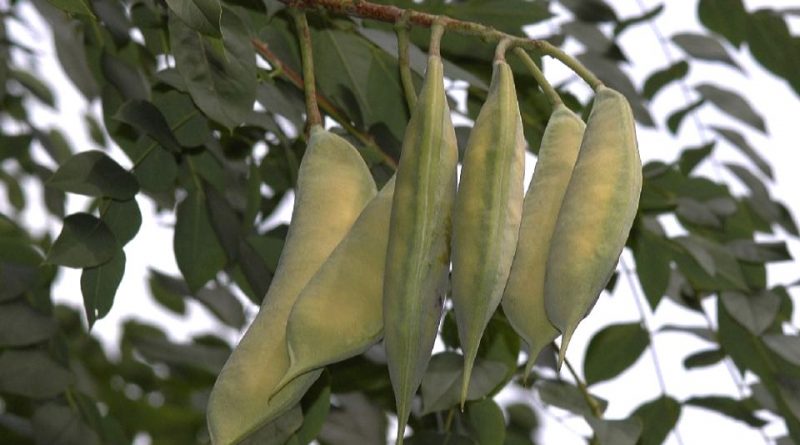 Systematics –
From the systematic point of view it belongs to the Eukaryota Domain, Kingdom Plantae, Magnoliophyta Division, Magnoliopsida Class, Fabales Order, Fabaceae Family and then to the Genus Gymnocladus and to the G. dioica Species.
The term Gymnocladus canadensis Lam is synonymous.

Etymology –
The term Gymnocladus derives from the Greek γυμνός gymnós nude and from κλάδος branch cládos: ie with bare branches. The specific dioecious epithet comes from the Greek δις dis, twice and οἰκία oikía, habitation: dioecious, because male and female flowers are worn by different plants. Its common name, instead, refers to the use of the pods by the first settlers as a coffee substitute (so much so that the English name is Kentucky Coffee Tree).

Geographic Distribution and Habitat –
The Kentucky Coffee Tree is an arboreal species native to the central-eastern area of ​​North America. This plant was introduced in Europe in the nineteenth century and today it is found in parks and botanical gardens. 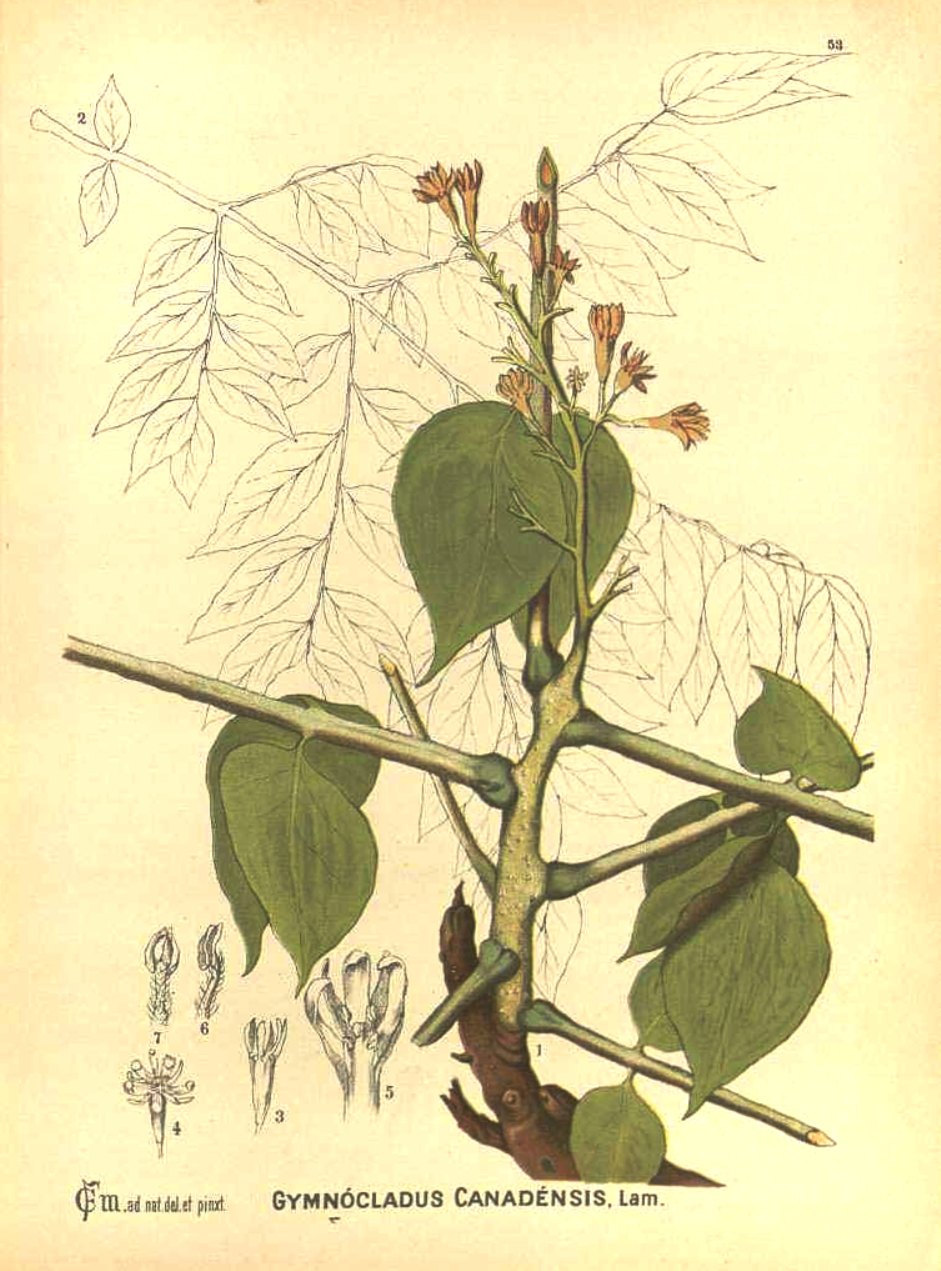 Description –
Gymnocladus dioicus can reach and exceed even 30 meters in height, with a wide crown that also develops vertically; the trunk is straight or sinuous and sometimes polyconic, covered with a gray rind, wrinkled, furrowed, which is scaled in subrettangolari plates. The leaves, which are up to 70 cm long, are deciduous, alternate, bipinnate, composed of ovate-sharp segments, 4 cm long. It is a dioecious species, although bisexual flowers may also be present. The flowers are gathered in racemes, elongated in the female and globose trees in the male ones, perfumed and with an elongated and tubular corolla. The fruit is a samara, an indehiscent legume of a bluish-black color when ripe, up to about 25 cm long, with mesocarp with brownish pulp and large, lenticular and brown seeds.

Cultivation –
The Kentucky Coffee Tree is a plant that tolerates the adversities typical of the urban environment and is adaptable to a wide range of land and climates, surviving even in dry, compacted or alkaline soils, while preferring moist and rich soils and exposures in full sun . It can be pruned both in winter and early spring (it sprouts very late) and does not show any susceptibility to particular pests. Although it is a legume, it does not fix nitrogen. However, recent research has shown that this species is able to form nodules even if at lower rates compared to other legumes.

Uses and Traditions –
George Washington’s diaries from the late 1700s contain the first trace of the name “coffee tree”. Thomas Jefferson bought some tree seeds from General George Rogers Clark in 1783, which he planted in Monticello (Kentucky State Senate Bill Number 150).
The Gymnocladus dioicus has many decorative qualities. It has an elegant branching, particularly evident in winter in contrast with the clear blue of the sky, when the leaves have fallen. The autumn fall of the leaves makes an impression: it seems that the branches themselves fall with a roar on the ground. The seeds have the most diverse uses. In the United States they were used as a substitute for coffee during the period of the secession wars. Mixed with camphor, sandalwood and cloves are used in the East as a product to be burned to perfume homes. The Chinese use the fruit left to macerate in water as a makeshift detergent. The reddish wood is appreciated in cabinet making because it is very compact and hard. Here it is used only as an ornamental tree, even if little used and almost unknown, despite being very attractive both in summer and in winter.
The wood of this tree is hard and durable but hard to work with.
There is some evidence to suggest that Gymnocladus was introduced into Kentucky by Native Americans, who used wood extract to treat psychiatric problems. A tea made from leaves and pulp was used as a laxative. The seeds were used by the first settlers as a substitute for coffee. However, caution should be exercised because seeds and pods are poisonous, as they contain cytisine, an alkaloid, which can be dangerous, but which is neutralized in the toasting process.
Recall that the cytisine, also called soforina or ulexina, is contained in various plants of the genus Sophora and in various legumes (eg laburnum and cytisus).
It occurs in colorless, hygroscopic, soluble in water and alcohol, insoluble in ether crystals. Because of its high toxicity, it can cause a serious form of intoxication, cytisism. Cytisine hydrochloride is sometimes used as an antiemetic therapy and to fight cough.

Preparation Mode –
In the United States the seeds of this plant were used as a substitute for coffee during the period of the secession wars. They are mixed with camphor, sandalwood and cloves are in the East as a product to be burned to perfume the houses. The Chinese make the fruits macerate in water to use as a makeshift detergent.