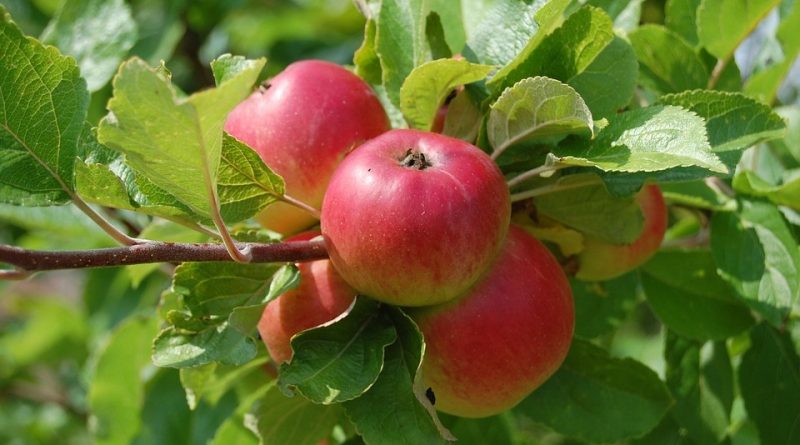 The apple tree (Malus domestica Borkh., 1803) is a fruit tree species of the Rosaceae family.

Etymology –
The term Malus derives from the Latin name of the apple tree, mentioned by Varrone and other authors. The specific domestic epithet is in reference to our own or domesticated species.

Geographic Distribution and Habitat –
Malus domestica is a species originating from a southern Caucasian area; species tamed in the mists of time, is now intensively cultivated in China, United States, Russia, Europe (especially in Italy and France). 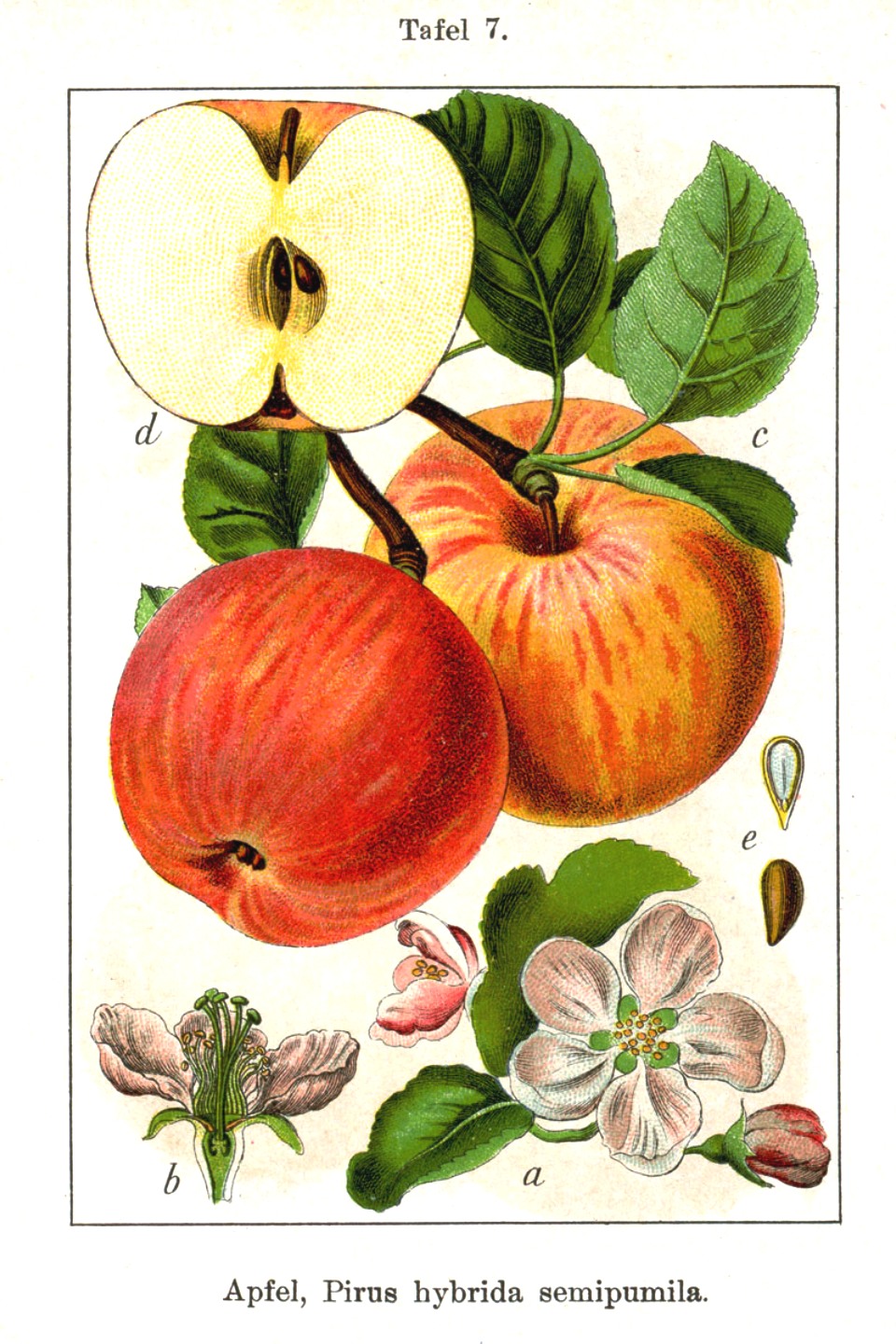 Description –
The apple tree is an arboreal species of small size (5-12 meters of height), deciduous with dense and expanded foliage and superficial root system. The leaves are alternately arranged and are simple and oval, slightly serrated, with acute apex and rounded base, with dimensions of 5-12 cm long and 3-6 cm broad, hairless at the top and with a certain tomentosity on the lower page. The petiole is 2-5 cm long. It possesses hermaphroditic flowers of white-pink color externally and white internally with symmetry pentamera; these have a corolla of 5 petals, 2.5-3.5 cm wide and an inferior ovary. The flowers are gathered to form coryneal inflorescences with a number varying from 3 to 7. The antesis is in the spring period and is simultaneous to the emission of the shoots. Pollination is entomophilous.
The fruit is a false fruit with a globular shape, generally 5-9 cm of diameter, first green and ripe, summer-autumn, with a variable color from yellow-green to red. The real fruit, derived from the ovary accretion, is actually made up of the core, of a more coriaceous consistency than the pulp. The pericarp has five carpels arranged in the shape of a star and each carpel contains from one to three seeds.

Cultivation –
The apple tree is one of the most cultivated fruit plants in the world. In Italy, production is concentrated in the north: 80% of the national crop, in fact, comes from three regions of the North: Trentino-Alto Adige (46%), Emilia-Romagna (17%) and Veneto (14%). Other areas of a certain importance are Piedmont, Lombardy and Campania. The prevailing forms of rearing are the palmette and the fusetto with planting heights that start from a minimum of 3 m for 1 m and 5 m for 4 m, respectively; the plant density varies from 500 to 3000 plants / ha. As far as the cultivation technique is concerned, the following sheet can be consulted.

Uses and Traditions –
The origins of the apple tree are so old that they are lost, as mentioned, in the mists of time and information on differentiation and diffusion are often blurred. The first traces of apple fruit used by man were found in Europe in the Neolithic settlements in the area of ​​Germany and Northern Italy. Primary centers of origin of the first species, can be placed in the highlands of India and Pakistan, in Central Soviet Asia and in Asia Minor. Recent studies, on the other hand, would restore the origin of the apple tree to Kazakhstan, around whose capital Alma Ata, which means precisely “Father of the apples”. This plant would have arrived along the Mediterranean and the Silk Road, in particular for the seeds that, through the dejections and the residues of the meals, the caravan workers abandoned in the long path.
Symbolism and legends have always been associated with the apple tree. Most of it is linked to the symbolism that has the apple in love and one of the most famous stories in this sense is surely that linked to the Symposium of Plato. Here Aristophanes explains what love consists of: at the beginning each one constituted a whole there was no distinction between man and woman, the individual was perfect, he was happy and was enough to himself, with four legs, four arms and two faces, then could have a 360-degree visual overview. One day Zeus, who was jealous of this perfection, cut the perfect apple in half and so the males and females derived from the androgyne. From that day on the man began to desperately search for his half, because without her he felt incomplete and unhappy.
The apple enters the Trojan war. According to Greek mythology, it was thanks to the apple of discord. Eris, the goddess of discord, furious at the exclusion from the wedding feast of Peleus and Thetis, brought revenge to the guests and brought her a golden apple, declaring that she was destined “to the most beautiful” among the divine guests. The three goddesses who claimed it were Hera, Athena and Aphrodite. Jupiter, in order to get rid of the great task, decided that this decision should belong to the most beautiful man, that is, Paride prince of Troy. Each goddess then promised the young man a reward in exchange for the apple: Athena, would give him wisdom and intelligence, It would make him rich, powerful and glorious and Aphrodite offered him love, bestowing him in marriage the most beautiful woman, Elena. Paride favored the latter by unleashing the wrath of the other two. The goddess of love then helped Paris to kidnap Elena, wife of the king of Sparta Menelaus, laying the groundwork for the Trojan war.
We find the apple in the stories of Aesop or the Brothers Grimm, where in Snow White and the Seven Dwarfs the apple corresponds to an initiation rite, which leads only symbolically to the death of the protagonist, which leads to rebirth and allows you to defeat the evil witch. One of the strongest symbolisms is certainly that linked to religion and to the Christian tradition, which identifies the apple as a forbidden fruit, Eve that tempted by the snake catches the fruit of sin. Also confirmed by the assonance with in Latin term malum, which means apple but also suffering, punishment, punishment and interprets the human condition after the expulsion from the Earthly Paradise.
We also find the apple in Celtic traditions, the apple is a fruit of science, magic and revelation and is also a wonderful nourishment. In Scandinavian mythology, however, this food represents eternal youth, in line with medieval tales that indicate the fairy apples as a symbol of immortality and the Roman ones for which this fruit symbolizes universal domination.
Apples are fruits rich in vitamins and nutrients. In addition to folic acid, the vitamins of which apples are rich are: vitamin B1, riboflavin (vitamin B2); niacin (vitamin B3), vitamin A and vitamin C. The mineral salts contained in apples are sodium, potassium, iron, calcium, phosphorus and zinc. The popular saying wants an apple a day to take the doctor away. Whether it is true or not, apples are tasty fruits with many properties. Apples are part of the diet of many peoples and used in a variety of ways.
Honey can be obtained from apple blossoms, but as the flowers are not much desired by bees, the production is concentrated almost exclusively in areas of extensive cultivation such as Emilia-Romagna and Trentino-Alto Adige.

Preparation Mode –
The consumption of apples in the world is predominantly like fresh fruit. But apples are also subject to various processes in the food industry for the production of fruit juices, syrups, jams, ice creams, jams, etc. besides the apples enter in numerous recipes for the preparation of cakes, pies and can be eaten, as well as fresh, baked, boiled and in various other ways.