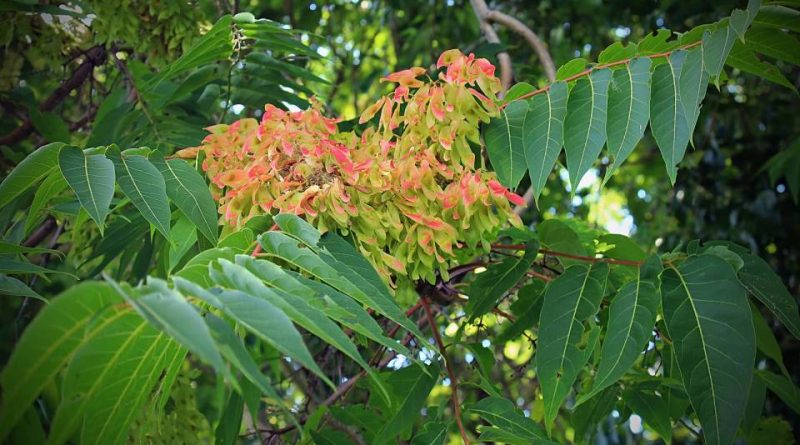 Systematics –
From a systematic point of view it belongs to the Eukaryota Domain, Kingdom Plantae, Magnoliophyta Division, Magnoliopsida Class, Sapindales Order, Simaroubaceae Family, and then to the Ailanthus Genus and A. altissima Species.

Etymology –
The name of the genus Ailanthus derives from an alteration of the Malay ‘ailant’ or ‘aillanitol’ (= ‘tree that reaches the sky’), name with which it is called in the Molucca archipelago. The very high specific epithet derives from the Latin ‘altissimus, -a, um’, also referring to the height that the plant can reach.

Geographic Distribution and Habitat –
Ailanthus altissima is a tree native to the temperate zones of northwestern and central China and Taiwan. Introduced in Europe in the 1700s as a garden plant, it has escaped almost everywhere, from England to Mediterranean Europe. It is indeed a very rustic species and adaptable to any type of terrain: for this reason it quickly colonizes uncultivated or disturbed land, slopes, edges of railways, roads and streams, up to the submontane belt, often to the detriment of indigenous species due to the allelopathic effect . It is found again from 0 to 800 m s.l.m. It is now also found in the United States, Australia and New Zealand. He is in fact a lover of temperate climates rather than tropical ones. 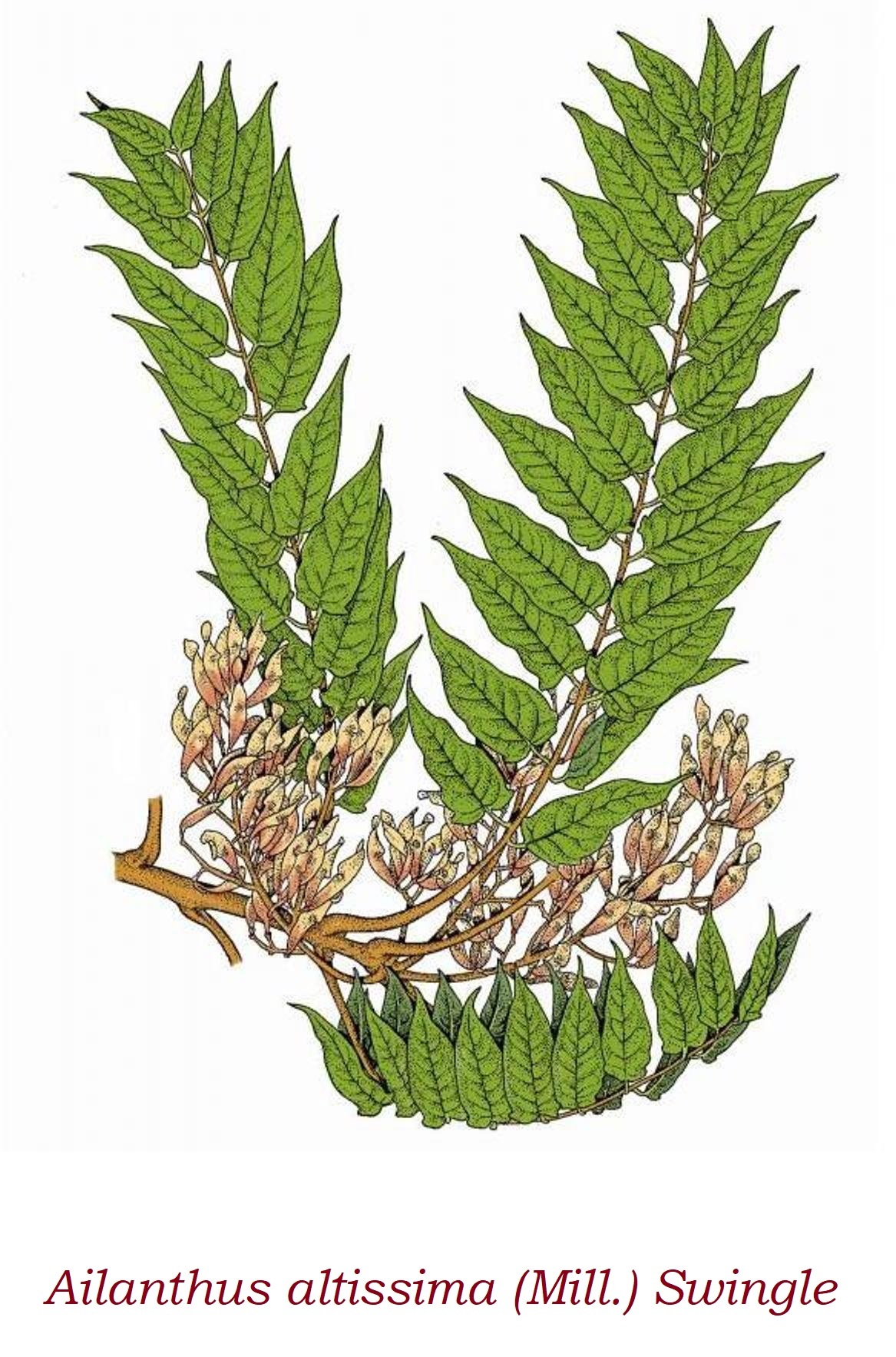 Description –
The Ailanthus altissima is a tree that grows rapidly and is capable of reaching heights of 15 m in 25 years; it is a species that is not long-lived, as it rarely exceeds 50 years of life, although its extraordinary ability to generate suckers allows the plant to replicate itself for much longer times. It can reach 20 meters in height and has a wide and irregular crown, sparse and initially not very branched; the bark is almost smooth and greyish. The leaves are deciduous, alternate, imparipinnate, up to 90 cm long, with 6-15 pairs of pointed lanceolate segments with petioles plus a terminal segment; at the base of these are oil glands which give off an unpleasant odor.
Door of the cobs of greenish color with white-yellow flowers, with pleasant scent, 5-7 mm long, bisexual and unisexual, the latter tending to spread on distinct plants (polygamous-dioecious species). Pollination is entomogama. The fruits are lanceolate samarees, reddish brown in color, which persist in the winter period on the plant.

Cultivation –
The ailanth is a heliophilous species that has been extensively cultivated, first in China and then also in other countries (in Italy since 1854) for the breeding of the Samia cynthia (bomb of the Ailanth), the caterpillar of a moth used for the production of a particular silk. In the Italian regions where this kennel existed, the moth has escaped breeding, has become naturalized and continues to live on herds which are in turn naturalized. The ailanthus, due to its adaptability and its great speed of growth, proved to be valuable for the consolidation of landslides and barren lands, for which, especially in the past, it was widely used. For details of the cultivation technique refer to the following sheet.

Uses and Traditions –
The Ailanthus altissima, originally from China, has a long and rich history in this country. It is cited in the oldest Chinese dictionary and mentioned in countless Chinese medical texts for its effectiveness in curing ills ranging from mental illnesses to hair loss. The roots, the leaves and the bark are still used today in traditional Chinese medicine, mainly as astringents.
This plant was imported into Europe in 1740 and in the United States in 1784. It was initially presented as an ornamental species of fast growth and great adaptability to rough or sterile land. For this reason it was then widely used for road and park trees during most of the 19th century. Even today, it is possible to see, as a testimony to the ornamental use of this species, great ailants in avenues, parks and gardens
Because of its characteristics of adaptability and polloniferous, but soon, this species has proved invasive, escaping crops. It is indeed present as a naturalized species in many regions of Europe and the United States and in other areas outside its original range.
Its eradication is difficult, because the tree vigorously repels if cut; the fight against the ailanthus is necessary where it enters into competition with indigenous plants (especially in areas already degraded by human activity), but naturally, not in other situations, as in the case of city trees, or where the spread in natural environments It’s contained.
The wood of the isanto is of very modest quality, both for strength and durability. Ailanto wood is soft and is used above all in the paper industry; while use as an ornamental plant is very limited due to the unpleasant smell of the leaves.

Preparation Mode –
From the bees, the bees obtain an appreciated monoflora honey (honey of ailanthus), which has a fruity aroma, similar to fig, peach and muscat grapes. The strong taste of this honey makes it suitable for use in fruit salads; it is produced immediately after acacia honey and simultaneously with that of lime tree. In some situations, the nectar nectar is collected by bees together with those of linden and acacia, so that the resulting honeys have characteristics influenced by it.