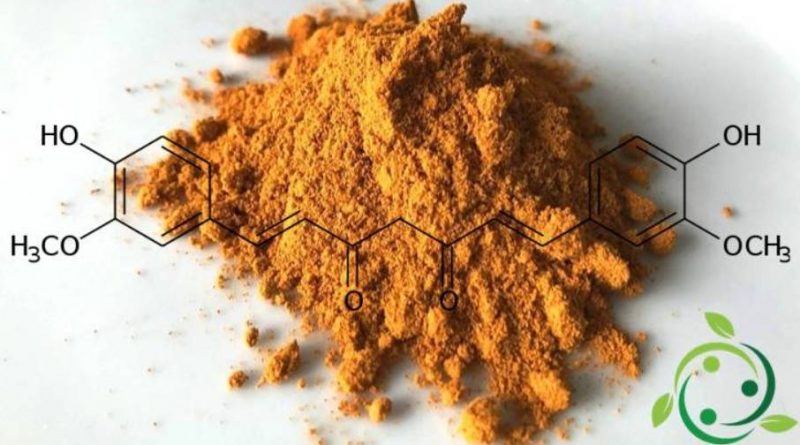 Curcumin, whose brute formula is C21H20O6, in the IUPAC nomenclature is: (1E, 6E) -1,7-bis- (4-hydroxy-3-methoxyphenyl) -epta-1,6-dien-3,5-dione , is a natural dye classified with the initials E100, in the European coding of food additives. From the chemical-nutritional point of view, curcumin is classified among phenols (more precisely polyphenols). Curcumin is an extract from Curcuma longa and mainly used as a food coloring and makes up 2-8% of the weight of the common turmeric powder for cooking.
The color of curcumin is yellow very similar to that of saffron. Admitted to Europe as a food coloring is not allowed in the USA and Canada.
Today, curcumin can also be considered a food supplement and is generally recognized as safe (GRAS) by the FDA.
The curcumin was first isolated by Vogel and Pelletier in 1842. The first synthesis in the laboratory is due in 1913 by Lampe.

It is precisely the characteristics and qualities of curcumin, one of the components of Curcuma, which made this plant an important component of the medicine and herbal medicine of many countries in Southeast Asia.
The root of turmeric is particularly used in Indian and Asian cooking to prepare curry and various typical local sauces, while in Ayurvedic medicine, thanks to the curcumin content, it has been used for many centuries for the treatment of a wide variety of disorders.
Curcuma is in fact used for bile disorders, jaundice, anorexia, cough, diabetic ulcers, liver disorders, rheumatism, inflammation, sinusitis, menstrual disorders, hematuria, and hemorrhage. Other uses are as an antiseptic, analgesic, anti-inflammatory, anti-malarial and insect repellent.
Due to its characteristics and peculiarities, curcumin is one of the most studied molecules in the world for its phytotherapeutic effects.
Besides Curcuma longa, curcumin and its analogues are present in other species: Curcuma mangga, Curcuma zedoaria, Costus speciosus, Curcuma xanthorrhiza, Curcuma aromatica, Curcuma phaeocaulis, Etlingera elatior and Zingiber cassumunar.