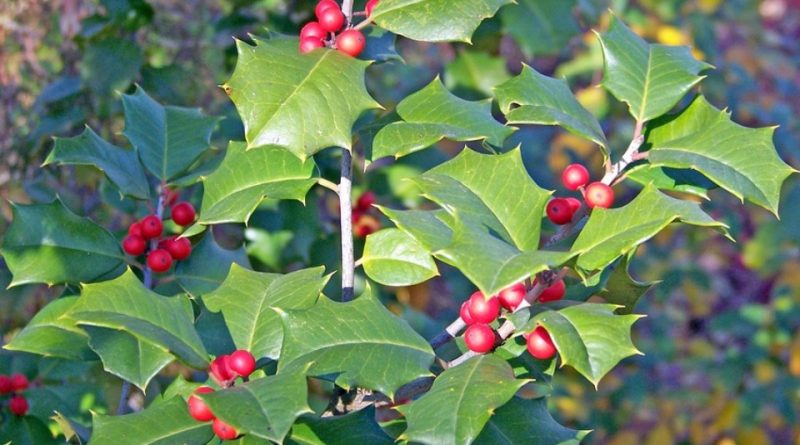 The holly, also known as Aquifoglio, Spiny laurel, Greater holly (Ilex aquifolium L.) is a small tree or shrub of the family Aquifoliaceae.

Systematics –
From the systematic point of view it belongs to the Eukaryota Domain, Kingdom Plantae, Magnoliophyta Division, Magnoliopsida Class, Celastrales Order, Family Aquifoliaceae and therefore to the Ilex Genus and to the I. Aquifolium Species.

Etymology –
The term Ilex derives from the Latin name of the holm oak (Quercus ilex), used by Linnaeus as the generic name of the holly for the similar leaves; according to some authors perhaps it is derived from the greek ὑλήεις hyléeis wooded, wild. The specific epithet aquifolium comes from ácus -acútus needle, acute and folium leaf: with thorny leaves.

Geographic Distribution and Habitat –
The Ilex aquifolium is a native species of Atlantic Europe and the Mediterranean up to the Caucasus. Its habitat is from sea level up to 1,400 meters in the mountain ranges of southern Europe (Madonie in Sicily). In Italy it is present in all regions. 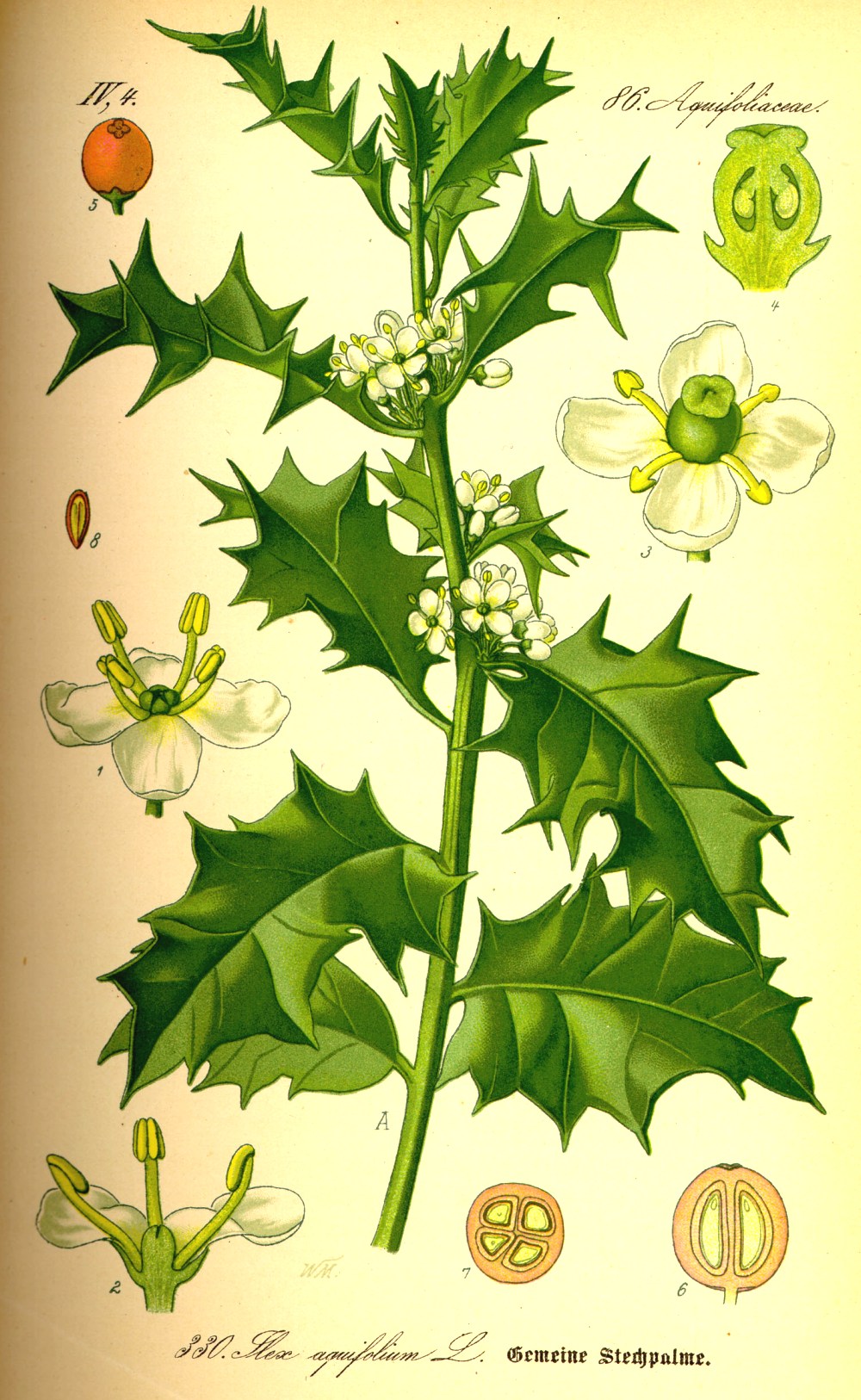 Description –
The Ilex aquifolium is a species in the form of a shrub or a tree up to 10 meters tall, although some specimens in Sicily reach 18 meters. It is characterized by a dense, glossy dark green pyramid-like foliage. It has a straight and cylindrical trunk, with gray bark, thin and finely wrinkled. The leaves are evergreen, rigid, thorny and leathery, glossy, dark green in the upper page and light green in the lower one, with a margin that can be smooth and whole or thorny and wavy. The plants are dioecious with male and female flowers separated and present in small groups at the axil of the leaves. The male flowers have 4 petals in the shape of a teaspoon, white in color and with a red margin; the female ones are white and with dark green ovary. The fruits are sub-spherical drupes of 8-10 mm of diameter and remain on the tree all winter.

Cultivation –
The Aquifoglio is a plant that likes shaded or undergrowth positions, acid or semi-acid soil, fertile and rich in humus. It is multiplied and with the sowing of fresh seeds, or by means of semi-woody cutting, by layering or by grafting. For the cultivation method you can consult the following sheet.

Uses and Traditions –
The Ilex aquifolium in ancient times was considered a magical plant, even before the advent of Christian Christmas. It was believed to protect the demons and bring good luck. Its first use dates back to the Irish people, where the poorest families used it to decorate their homes.
The pagans, especially from the Germanic tradition, of the Yule festival, celebrated the rebirth of the sun at the winter solstice, in the same way as the Saturnalia and the Sol Invictus of the Romans. The solstice was symbolically staged as a battle between the summer oak and, in fact, the winter holly. Moreover, the red holly berries represented fertility after the deep winter darkness, a promise of return of light and heat.
With the advent of the Christian tradition, new symbolisms and meanings were associated with this plant. The structure of the leaves would remember the crown of thorns of Jesus Christ and the red fruits of his blood. The white buds represent the image of the purity of the Madonna. Among the various Christian traditions it seems that the holly berries derived from the coagulated blood of a shepherd who in bringing gifts to Jesus was wounded with the pungent leaves of the plant.
The magic wand purchased by Harry Potter before joining the Hogwarts magic school is holly.
The holly is used for its hard and compact wood, much appreciated for cabinet-making and sculptures. It is a widely used plant, due to its particular shape, as an ornamental plant.
The drupes contain a very poisonous glycoside; in fact, if they are ingested they cause serious intoxication (even fatal) with vomiting and diarrhea.
Holly is also used for medicinal purposes as it contains saponins, xanthine theobromine and a yellow pigment, ilexanthin. Nowadays holly is rarely used in phytotherapy because of its toxicity, but still has diuretic, febrifugal and laxative properties. It also has an effect similar to that of serotonin.

Preparation Mode –
Holly is used to make decoctions or infusions with febrifugal, calming properties and to treat jaundice.
The fruits, ripened in the period from October to December, are dried to heat. They perform a purgative action. But because of the content, the holly is toxic to humans because it irritates the stomach and intestines, and other components make it harmful to the nervous system and the heart. Ingesting just twenty berries can be fatal for an adult.