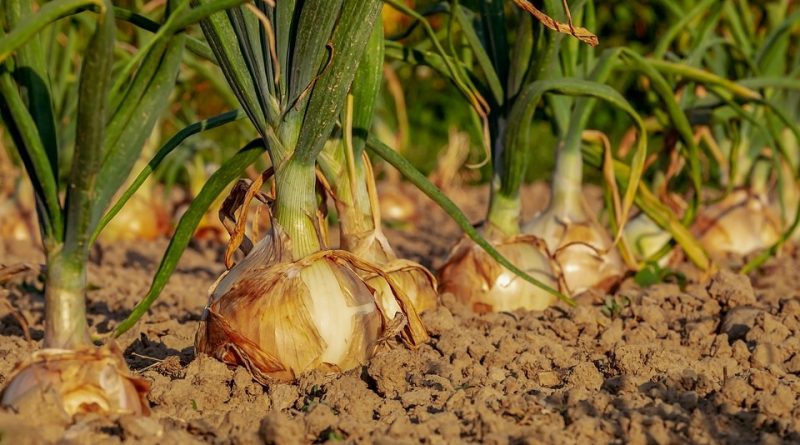 The onion (Allium cepa L.) is a bulbous herbaceous species belonging to the Amaryllidaceae family.

Systematics –
From a systematic point of view it belongs to the Eukaryota Domain, Kingdom Plantae, Magnoliophyta Division, Liliopsida Class, Liliales Order, Amaryllidaceae Family and therefore to the Allium Genus and A. cepa Species.

Etymology –
The term Allium comes from the ancient Latin name allium, alium (quoted by Plautus, Pliny and others) of uncertain origin. According to Pianigiani, it derives from the Greek ἄγλῑς áglis, head of garlic. The specific epithet cepa is the form used by Pliny in place of the usual onion caepa (derived from the Greek κάπια kápia).

Geographic Distribution and Habitat –
The onion is a biennial herbaceous plant that most probably originates from the plateaus of Turchestan and Afghanistan. Today, this plant, in all its many varieties, is grown all over the world. The onion was introduced to Central America by Christopher Columbus in his journey of 1493 to Haiti but in the north it was already known, Chicago means “Field of Onions” in the Algonchina language of the Native American tribes.

Description –
Allium cepa is an herbaceous species whose root system consists of numerous collated and superficial roots (generally in the first 20-25 cm of soil), whitish in color, normally lacking in root and fleshy hairs. The leaves are hollow, fistulous, swollen at the bottom. The bulb consists of the enlargement of the basal part of the leaves that thicken, become fleshy, white or slightly colored red or violet. The outer sheaths are instead thin, paper, of a variable color from white to golden, to red to violet, depending on the variety. The plant brings, in the second year, a floral scape, hollow internally and swollen in the lower part, which leads to the top a simple, globose umbrella inflorescence, composed of many flowers, which have protandria (the anthers first mature and then the ova) and consequent allogamy as fertilization is favored by pollinating insects. After fertilization a trilocular capsule is formed which contains 1-2 seeds, irregularly shaped, black or even brown.

Cultivation –
The onion is grown in Italy especially in Emilia-Romagna, Campania, Sicily and Puglia.
In intensive cultivation, sowing is normally carried out with pneumatic precision seed drills. The distance of sowing varies (rows 16-20 cm for bulbous ones, 9-10 cm for those with a smaller bulb), with seed placed at a depth of 2-3 cm. After sowing, a slight rolling is carried out. The sowing period is from September to December for fresh consumption onions, with spring harvest, and from January to April for those to be conserved, for a summer-autumn harvest, for pickles and for industry. Due to the phenomenon of “soil tiredness” the best production results are obtained with a rotation of at least three years by following the onion to grassland crops, cereals, or, in the areas with horticultural vocation, with radicchio, salads or carrot. Sequences to beet, sugar and cabbage are to be avoided. We recommend a 30-40 cm plow. Excellent knowledge, in vegetable crops, between onion and carrot, cabbage, cucumber, green bean, strawberry, lettuce, pepper, tomato, pea, zucchini.You can also plant starting from seedlings, shortening the cycle of about 3 weeks. This operation is carried out above all for vegetable cultivations. The onion, although not presenting particular nutritional needs, still requires good soil fertility. It can also be grown in pots of particular dimensions at home level. For the latter technique, the following sheet can be consulted.

Uses and Traditions –
Allium cepa was known in its wildest form. Onion bulbs and other plants of the family were used as food already in antiquity. In the Canaanite settlements of the Bronze Age, next to fig seeds and date pits dating back to 5000 BC, remains of onions have been found, but it is not clear whether they were actually cultivated at that time. Of course, however, the cultivation of onion was practiced in ancient Egypt and could have started about two thousand years later, together with garlic and leek. It seems that onions and radishes were part of the diet of the workers who built the pyramids. Moreover, the ancient Egyptians made it the object of worship, associating its spherical shape and its concentric rings to eternal life. The use of onions in burials is demonstrated by the remains of bulbs found in the orbits of Ramesses II. The Egyptians believed that the strong aroma of the onions could restore the breath to the dead. The onion was consumed in abundance by athletes in ancient Greece. It was a belief that they lightened the blood. Roman gladiators rubbed their bodies with onions to firm up their muscles. In the Middle Ages onions were very important as food, so much so that they were used to pay rent and as gifts. Onions were prescribed by doctors to relieve headaches, to treat snake bites and hair loss.
In the 16th century, onions were also prescribed as a cure for both human infertility and domestic animals.
Onions contain significant amounts of vitamins and minerals. Their smell is due to the abundance of sulphoxides, also the tear, after the cut of the onions, is due to the precursors present in the cytoplasm, the alkyl or alkenyl cysteine ​​sulfoxides (ACSO), after the cut they combine with the allinase, a enzyme that is released from the vacuole; the combination of these elements produces solfenic acids, pyruvate, and ammonia. The solfenic acid, if attacked by a second enzyme called Factor-lacrimogeno-synthase produces sin-propanethial-S-oxide, a volatile and water-soluble molecule, which is precisely the tear gas factor, since when it comes into contact with the aqueous humor present on the eyeball, it turns into sulfuric acid which causes the tear reaction.

Preparation Mode –
The onion enters a myriad of dishes and preparations. It is consumed both raw, in salads and other preparations and as a condiment and flavoring of many dishes. It is also used for pickles and pickles and for the preparation of soups, cakes, oven-baked dishes, sautéed, boiled, etc. The onion is one of the most used food in the world and in the traditional kitchens of almost all peoples.

One thought on “Allium cepa”