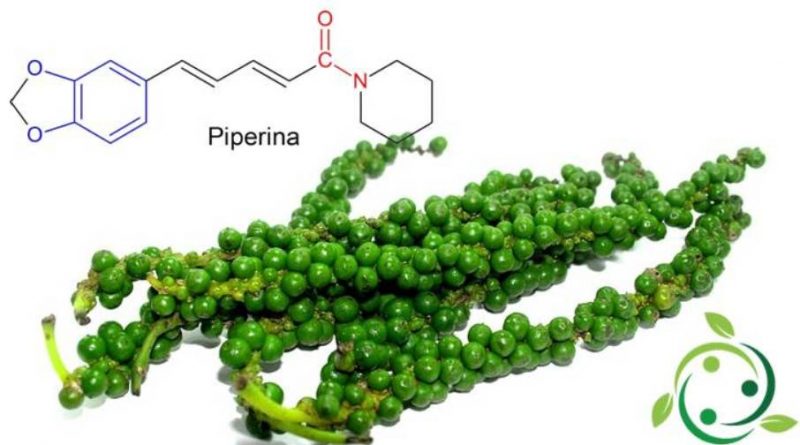 Piperine is an alkaloid whose brute formula is: C17H19NO3 and whose IUPAC name is: (E, E) -1- [5- (1,3-benzodioxol-5-yl) -1-oxo-2,4- pentadienyl] piperidine. This alkaloid in nature is present in black pepper (Piper nigrum L.) and is found above all in the superficial layer of black pepper fruits.
Piperine is a crystalline and colorless substance or even, depending on some impurities, of a creamy yellow color, with a distinctly bitter taste, it is responsible for the spicy taste of the pepper.
It was by the Danish physicist and chemist, of the University of Copenhagen, Hans Christian Ørsted that the piperine was isolated for the first time in 1820.
The piperine was however already known, at least for its effects, in Chinese and Indian medicine where it was used to treat digestive problems and for the treatment of arthritic pain, heart disease, angina and gangrene.

We recall, for the sake of completeness, that piperine is in fact a traditional component of Ayurveda, an ancient Indian medicine based on a profound knowledge of the body and its relationship with the mind and the spirit.
Piperine has particular functions of enzymatic interaction, also interacting in the metabolism of some drugs. Among these interactions it was found that in humans, piperine can increase the bioavailability of curcumin by 2000%. It has also been found that piperine can stimulate skin pigmentation, following irradiation with UVB light.
In addition, piperine can block the formation of new fat cells and reduce the level of fat in the blood. In addition, piperine increases the secretion of digestive juices and accelerates the process of food digestion.
Other interesting effects of piperine are related to its antidepressant effects, as it causes an increase in the neurotransmission of dopamine and serotonin.
In recent times research has also been carried out to understand if there is any link between its presence and the inhibition of the growth of cancerous cells.