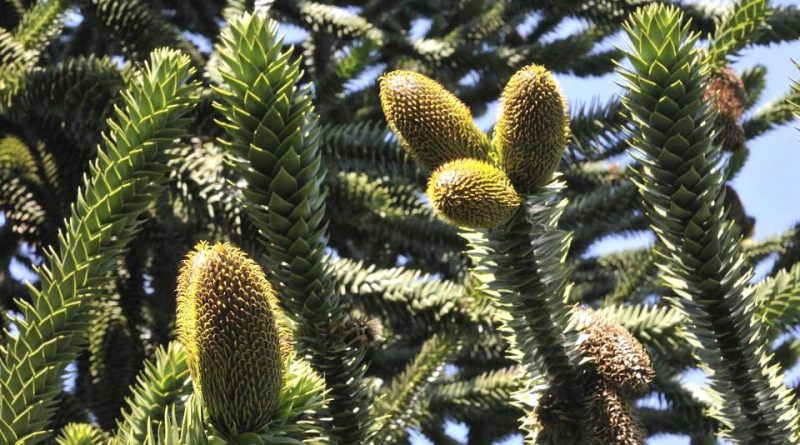 The Araucaria of Chile (Araucaria araucana (Molina) K. Koch, 1873) is an arboreal species belonging to the Araucariaceae family.

Systematics –
From a systematic point of view it belongs to the Domain Eukaryota, Kingdom Plantae, Suborign Tracheobionta, Division Pinophyta, Class Pinopsida, Order Pinales, Family Araucariaceae and then to the Genus Araucaria and to the Species A. araucana.

Etymology –
Both the generic term Araucaria and the specific araucana epithet of this plant originate from the name of the Arauco Indians, inhabitants of the southern province of Chile, from where the plant originates, strengthening its habitat of origin.

Geographic Distribution and Habitat –
Araucaria araucana is a plant native to the slopes of the Chilean and Argentine Andes, especially above 1000 m, in regions with large winter snowfalls. 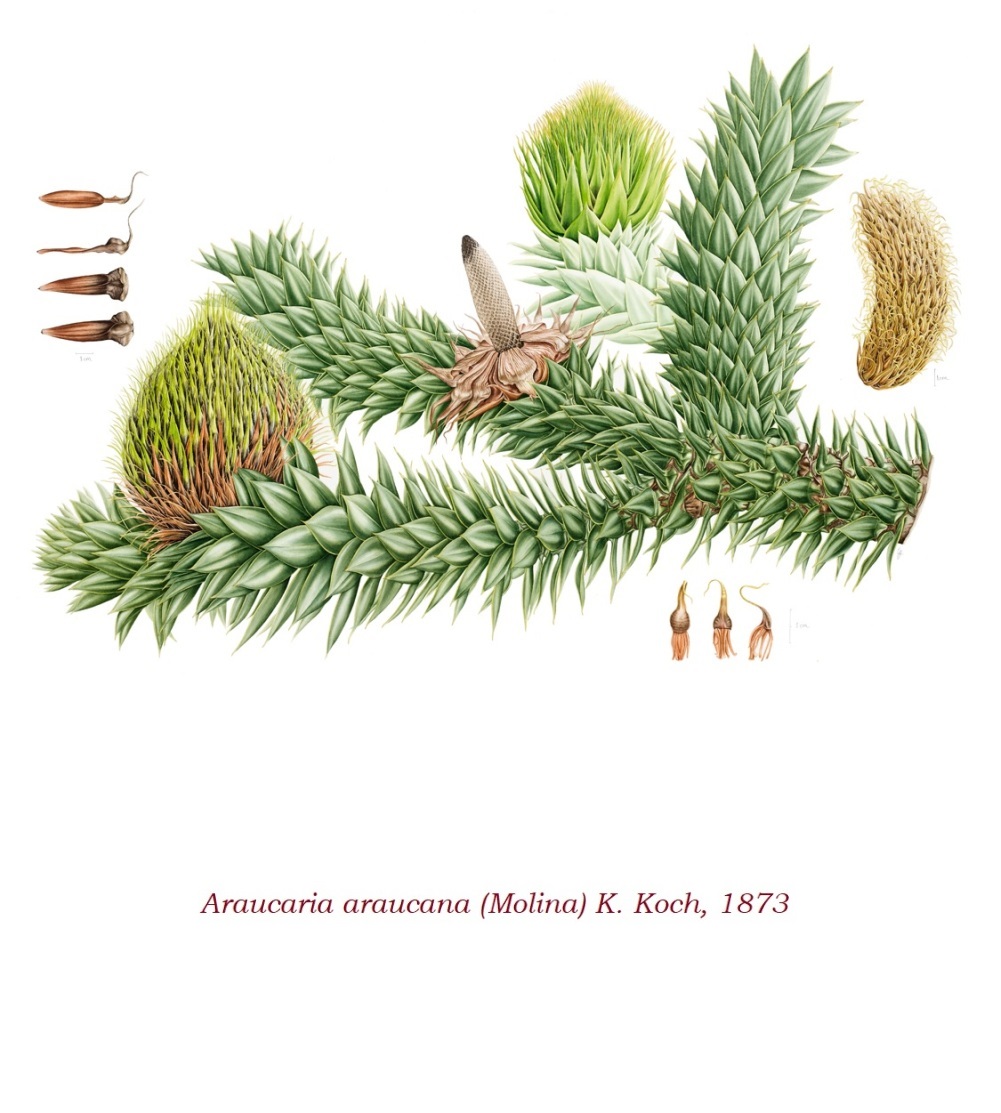 Description –
The Araucaria of Chile can reach 50 meters in height in its natural habitat. The crown is very light and luminous, dark green, pyramidal when young and then more expanded. The trunk is straight and with grayish rind, which branches into spaced verticils. The leaves are thick, hard and pointed, triangular, 3-4 cm long and 1-3 cm broad at the base, with a sharp edge, imbricate and last 10-15 years and then fall together with the branch. It is a dioecious species with male and female sporophylls brought to different plants, although some specimens carry both. The male plants produce axillary cones at the ends of the upper branches which are initially patent and yellow-green, then pendulous, yellow-brownish, with length up to 20 cm. The female are distinguished by bringing large globose cones, about 12 cm in diameter, brown, which at maturity (2-3 years) come off and fall to the ground.

Cultivation –
Araucaria araucana is a tree that grows better in bright and sunny places. It adapts to any type of soil but the best results, even aesthetic, are found in soils rich of organic substance, loose, well drained and with slightly acidic pH. Like all plants with a high melt it does not need irrigation except during the period of the first plant or in cases of exceptional drought. In any case, only for the first few years, this Araucaria should be watered in the summer.

Uses and Traditions –
The Araucaria of Chile is certainly the most rustic species in the Araucaria genus and we find it in Europe up to Norway. The weight of the snow, especially in colder climates, often breaks the older branches so much that the tree keeps only a small crown of new branches on a tree trunk. In temperate gardens, on the other hand, the plant assumes a conical shape, aesthetically more pleasant.
This species was discovered in Chile around 1780; here it was called Pinus araucana by Juan Ignacio Molina in 1782. In 1789, de Jussieu created the new genus Araucaria but in 1797 Pavón published a new description of the species giving it the name of Araucaria imbricata. Definitively, in 1873, Karl Koch published the combination Araucaria araucana, taking the name of Molina in the new genre. In addition to the name Araucaria of Chile this species is also called Chile pine or Monkey tree (monkey puzzle for the English). This species is used, especially in Europe, as an ornamental plant in private gardens.
The Araucan Indians used this plant both for the seeds, as food, and also for its timber.

Preparation Mode –
The only food uses of this plant are those related to the use of its pine nuts.