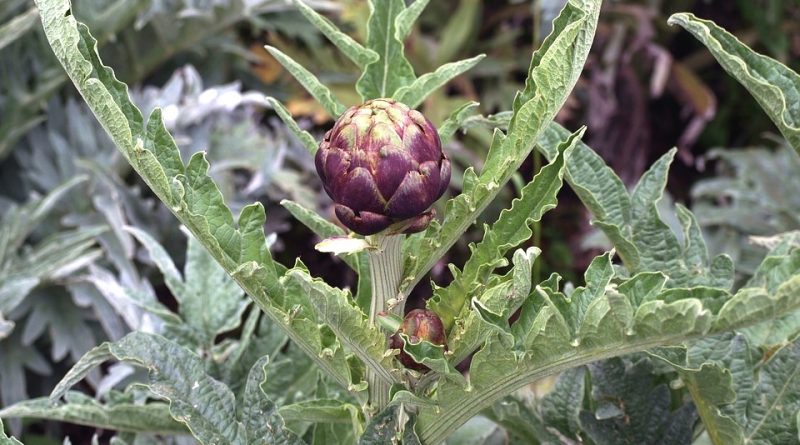 The artichoke (Cynara scolymus L.) is a herbaceous species, horticultural and medicinal, belonging to the Asteraceae family.

Systematics –
From a systematic point of view it belongs to the Domain Eukaryota, Kingdom Plantae, Magnoliophyta Division, Magnoliopsida Class, Asterales Order, Asteraceae Family, Subfamily Cichorioideae, Tribu Cardueae, Sottotribù Echinopsidinae and then to the Genus Cynara and to the C. C. scolymus species.

Etymology –
The term Cynara comes from the Greek κῑνάρα kinára, artichoke in Galen and Dioscorides. The specific epithet of scolymus comes from scolymus cardone, artichoke, a name found in Pliny (Latinization of the Greek σκόλυμος scólymos, a sort of edible thistle in Aristarchus and Theophrastus).

Geographic Distribution and Habitat –
Cynara scolymus is a native species of the Middle East; according to some historical, linguistic and molecular documents it seems that the domestication of the artichoke (Cynara scolymus) from its wild ancestor (Cynara cardunculus) may have occurred in Sicily, starting from the first century. Even today, in family gardens of central-western Sicily (near Mazzarino), an ancient cultivar is grown that, under the morphological-biological and molecular profile, would seem a transitional form between the wild thistle and some of the artichoke varieties. more widespread. 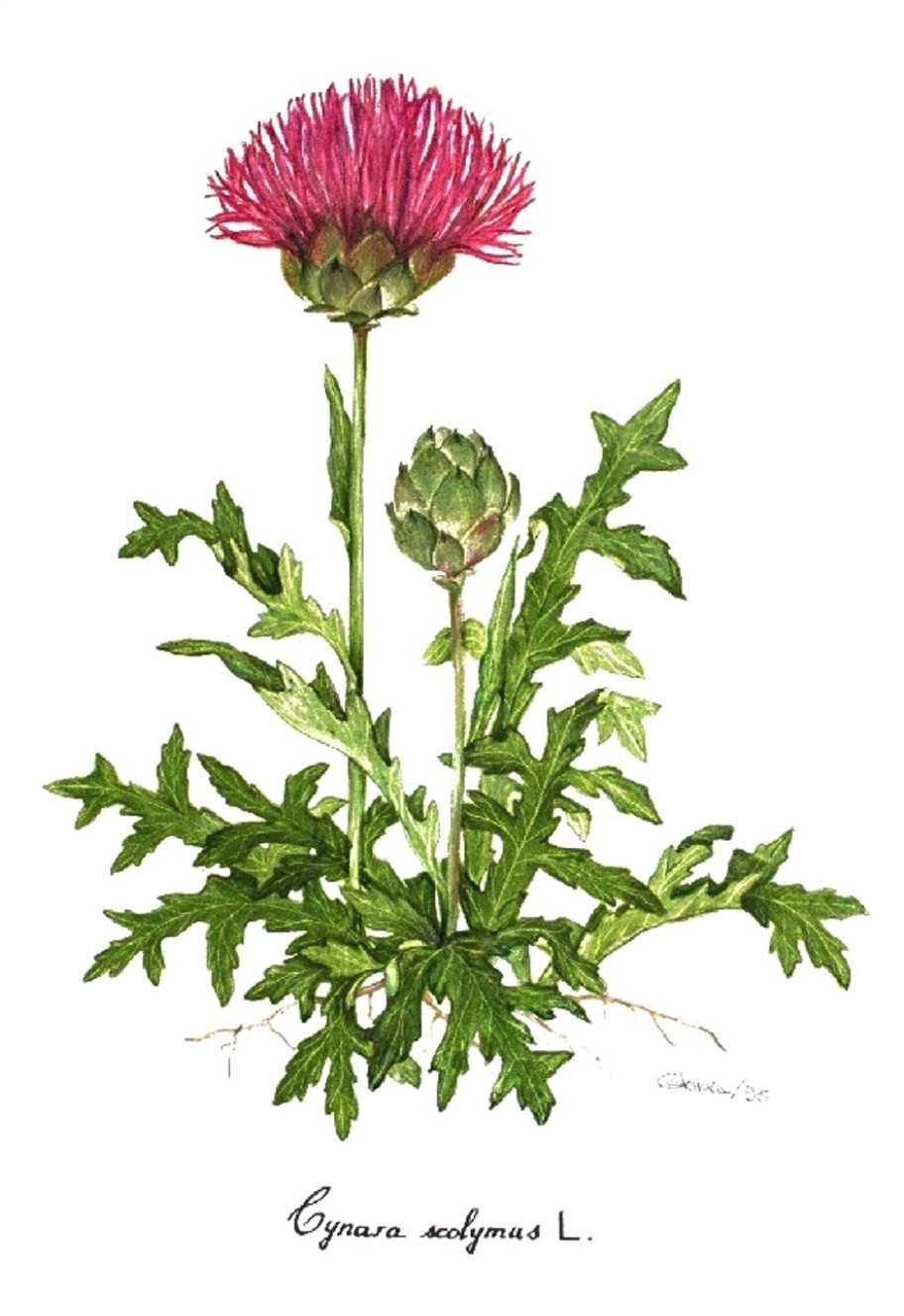 Description –
The artichoke is a perennial herbaceous plant up to 1.5 meters high, with an underground rhizome from which buds develop more stems, which at the time of flowering grow in height with a dichotomous branching. The stem is very shortened (2-4-cm), while the flower stem is robust, cylindrical and fleshy, striated longitudinally, provided with alternate leaves (large, more or less intense green color or sometimes greyish on the upper, clearer page) and with the presence of hair in the lower one, the spinosity of the leaves is instead linked to varietal facts.The flowers are blue hermaphroditic tuboloses gathered in a flowering inflorescence (calatide) that includes a basal part (the meaty receptacle), on which they are inserted the hermaphrodite flowers called “flosculi”, interspersed with flowers are present on the thalamus numerous white and translucent bristles (the “pappus”).
On the receptacle are inserted the involucral bracts or scales, available imbricate on each other, with the innermost tender and fleshy and the most external and consistent fibrous. Receptacle and internal bracts constitute the edible portion of the artichoke (heart).
The artichoke fruit is an elongated achene with a quadrangular cross-section, greyish brown and mottled. The floral morphology and the mechanism of anteses normally prevent self-pollination; fertilization is entomophilous.

Cultivation –
Cynara scolymus is a species that multiplies by gamica, using the “ovolo”, the “sucker” or “carduccio” or “portion of the strain”. The different cultivated varieties are distinguished according to the presence and development of the spines, according to the color of the flower head and according to the behavior in the phenological cycle. For the artichoke cultivation technique you can consult the following sheet.

Uses and Traditions –
The artichoke plant was already known by the Greeks and Romans, but surely it was a wild relative. Since ancient times, the wild artichoke has been an important product for the herbalists of Egyptians and Greeks, but it seems that its use in the kitchen is equally ancient. Already in the fourth century B.C. it was cultivated by the Arabs who called it “karshuf” (or kharshaf), hence the current term. Theophrastus in the “History of plants” speaks of “cardui pineae” which, due to its characteristics of form, properties and virtues, would be similar to our artichokes. The use of some wild artichoke variety in Roman cuisine is recalled by Columella, who called it the Latin name of Cynara, confirms how at that time it was used to consume that plant both for medicinal and alimentary purposes. In the “De re coquinaria” of Apicius, there is also talk of cynara hearts which, it seems, the Romans appreciated boiled in water or wine.
After Sicilian artichoke domestication a second introduction of the artichoke in Europe was operated by the Arabs since the ‘300, but very detailed information on its exploitation date back to the’ 400, when after several grafts, from the areas of Naples spread first in Tuscany, and later in many other regions.
The Spanish and French colonizers of America introduced the artichoke on this continent in the eighteenth century, respectively in California and Louisiana. Today in California the thistles have become a real scourge, a typical example of an invasive alien species in a habitat where it was not previously found.
In Italian Renaissance painting, the artichoke is represented in several paintings: “L’ortolana” by Vincenzo Campi, “L’estate” and “Vertumnus” by Arcimboldo. The artichoke was not immediately appreciated but was gradually introduced into cooking treatises. Even the fame of aphrodisiac food perhaps contributed to its diffusion; in 1557, the Mattioli in his “Discorsi” writes: “the pulp of the artichokes cooked in the meat broth is eaten with pepper in the end of the canteens and with a galangal to increase the venerable appetites”.
Today artichokes are grown mainly in Italy, Egypt, Spain and the United States of America and Peru. The best known spiny varieties are: the greens of Liguria and Palermo, and the violets of Chioggia, Venice and Sardinia. Another variety of thorny is that of Tuscany, of a purplish color. Among the non-spiny, however, we find the so-called Romanesco, commonly known as mammola, that of Paestum and Catania.
The artichoke is a vegetable rich in active ingredients, useful both for digestion and diuresis and for the care of the beauty of face, body and hair.

Preparation Mode –
For the preparation of artichoke in the kitchen we recommend the smaller ones with well-closed tips. The stem must be hard and without soft or yellowed parts. For storage we recommend: if they are very fresh and have long stems to dip them in water as you would with fresh flowers. To store them in the fridge you must remove the hardest outer leaves and the stem; washed and well dried they must be put in a plastic bag or an airtight container: they will be kept for at least 5-6 days. Artichokes can also be frozen after they have been cleaned and blanched in water acidulated with lemon juice, left to cool and placed in rigid containers. But very tender artichokes can also be eaten raw, while the others are prepared fried, in the courts, in the Roman style, in other words in the most varied ways. In many Italian regions there is also the great tradition of making artichoke preserves in vinegar or in oil.