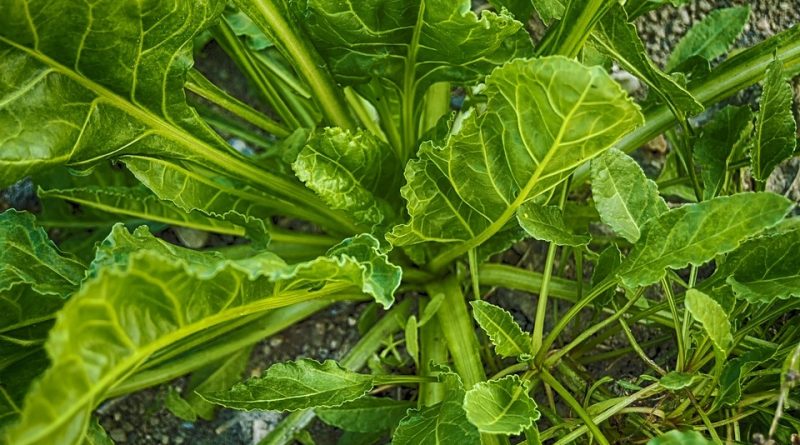 Spinach (Spinacia oleracea L.) is an herbaceous species of the Chenopodiaceae family.

Systematics –
From the systematic point of view it belongs to the Eukaryota Domain, Kingdom Plantae, Magnoliophyta Division, Magnoliopsida Class, Order Caryophyllales, Family Chenopodiaceae and therefore to the Genus Spinacia and to the Species S. oleracea.

Etymology –
The term Spinacia is a Latinized form from isbinãkh, the Arabic name of spinach; the specific epithet oleracea derives from ólus óleris, vegetable: used as a vegetable.

Geographic Distribution and Habitat –
Spinach is a vegetable known since antiquity. It is native to South-West Asia and was introduced in Europe, first in Spain and then in other countries by Arabs around 1000 AD, from Europe it was then introduced in America after 1500. Today it is cultivated almost everywhere in the countries with temperate climate. 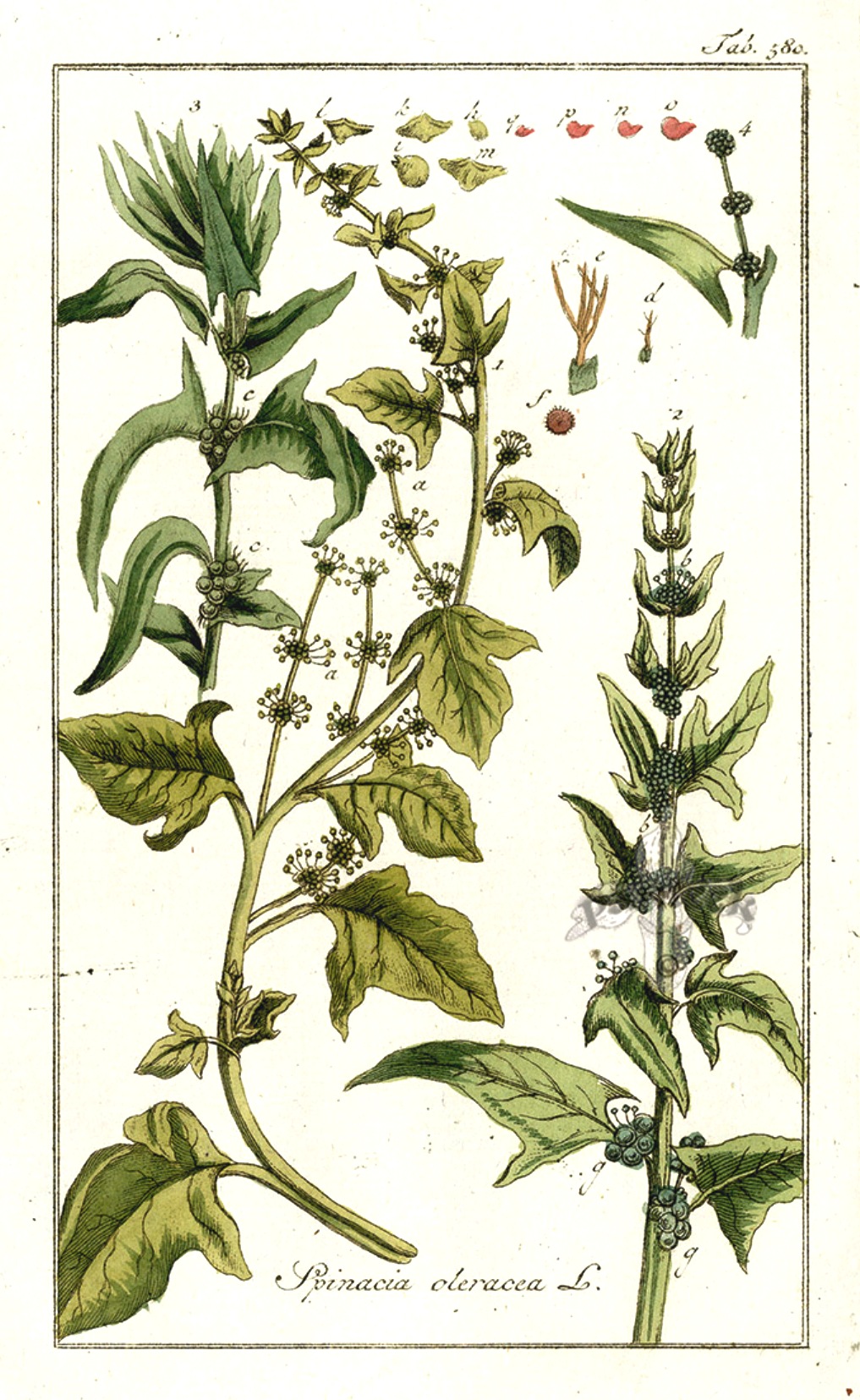 Description –
Spinacia oleracea is an annual cycle herbaceous spice with a red picking root near the collar. It has fleshy basal leaves with 5-10 cm long petioles and a smooth or boiled 10-20 cm long flap; these are joined to a rosette in the number of 20-30 before the emission of the branched floral scape. The spinach flowers are small, greenish in the axillary glomeruli, the female ones and the male ones in spikes; although it is a dioicus species there are varieties with intermediate sexuality in relation to the cultivars and to the environmental conditions, which can influence sexual expression. The female flowers are monoovular and give rise to a dry monosperma, indehiscent fruit with sclerosed endocarp. Depending on the shape of the fruit two subspecies are distinguished:
– Spinacia oleracea inermis Moench (= glabra Mill), with smooth subrotond fruits; it is the most widespread type in cultivation, with numerous cultivars;
– Spinacia oleracea spinosa Moench, with angular or spinescent fruits; less widespread and almost exclusively cultivated for the canning industry.

Cultivation –
Spinach, having a short vegetative cycle, is often cultivated as intercropping in the autumn-winter period and with sowing in August-September; finds the best phytosanitary conditions when 3-4 year rotations are observed; in the Center-North, spring crops are also produced above all, where crops are grown for industry. For its cultivation technique you can consult the following sheet.

Uses and Traditions –
Spinach is a very uncertain vegetable origin, and it seems that the Persian area is the most accredited. Mysterious also the arrival in Europe, it seems it was the Arabs or the Crusaders who introduced it towards the year one thousand. At the very beginning, particular virtues were recognized for this vegetable. According to al-Arbuli, an Arab author of the 14th century approx., the spinach had the ability to calm the stomach and fight the cough. Other scholars of the time attributed to him both corroborating qualities for gums and laxative and emollient effects: advising women to wash their uterus with vegetable cooking water, because for its astringent effects, it prevented the flow of moods.
Despite that Ibn al-Awwan, Islamic author of the twelfth century. of a treaty on agriculture, qualify it as a queen plant of vegetables for nutritional virtues, spinach did not enjoy great success among the privileged groups. Only the subordinate classes used it diligently in soups and minestrone.
It is said that Caterina de ‘Medici, when she left Florence to marry the future king of France, also wanted a cook who was able to cook spinach, one of her favorite vegetables. Since then in the classic French cuisine, preparations that require a bed of spinach are called for this “a ‘la florentine”.
It was not until the 19th century that these vegetables became very popular, first in Europe and then in America.
The intake of spinach is recommended in all low-calorie diets because they contain a lot of vitamin A and C, copper, phosphorus, zinc, calcium, potassium.
Although spinach is one of the vegetables with the highest iron content (3.4 mg per 100 g), there is a widespread belief that it contains a high amount, so much so that sometimes spinach is eaten in some cases of anemia. It seems that this belief was born as a result of a typo on a label that, in the first decades of the last century, led to this erroneous assessment. The comic book Braccio di Ferro, with its emphasis on spinach, was born during this period.
At the same weight, other vegetables have a much higher iron content: lentils (9 mg per 100 g), sunflower seeds (8.9 mg), soy flour (8.4 mg), chickpeas (6.7 mg / 100 g).
The presence of substances, such as phytic acid and oxalic acid, present in spinach, forms with iron the coordination compounds that make it less bioavailable.

Preparation Mode –
Spinach is a vegetable particularly appreciated in the kitchen for the possibility of preparing it in many ways. In the kitchen it is much appreciated not only for their unmistakable taste and consistency but also for their organoleptic properties. It is consumed as a vegetable with oil and other condiments or in a more elaborate way in countless recipes. They range from the classic recipe of spinach gnocchi, or with the cannelloni recipe with spinach, walnuts and speck stuffing; or with the caserecce with pumpkin, spinach and lemon, or that of wonton with spinach, gorgonzola and walnuts, and so on according to regional traditions.