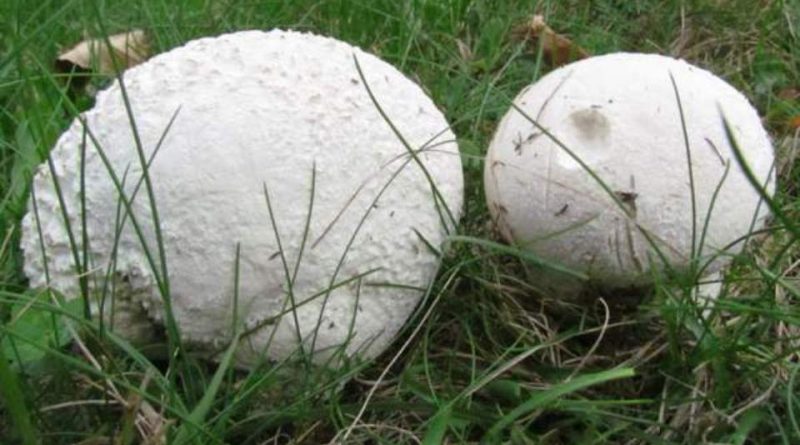 Systematics –
From the systematic point of view it belongs to the Domain Eukaryota, Kingdom Fungi, Phylum Basidiomycota, Subphylum Agaricomycotina, Class Agaricomycetes, Sottoclasse Agaricomycetidae, Order Agaricales, Family Agaricaceae and then to the Genus Lycoperdon and to the Specie L. utriforme.

Etymology –
The term Lycoperdon derives from the Greek λύκος lýcos, lupo and from πέρδον perdon, peto, loffa: lupa di lupo, due to the peculiarity of the fungus to emit, when hit or crushed, silent puffs of spores. The specific epithet utriforme comes from úter, útris otre and from fórma figura, appearance: in the shape of a wineskin.

Geographic Distribution and Habitat –
The Lycoperdon utriforme is a very common fungus that fructifies solitary or gregarious in the meadows and especially in mountain pastures from spring to autumn.

Recognition –
The Lycoperdon utriforme is recognized for having a fruiting body of 7-18 cm, subglogose, subellipoidal or piriform; the outer surface of the exoperidium is ridged, covered by pyramidal chisels first, then dissociated into polygonal isles. The color varies from milky white to brownish gray and brown when ripe, when finally the peridium tears due to the dispersion of the spores, leaving a cup-shaped residue consisting of the external wall that contained the gleba. The stem is short composed of a sterile base of spongy consistency. The meat is young and then yellowish-green in color, to become brownish-olive with defensive maturation; this is first compact and then pulverulent. The subgleba is separated from the gleba by a pseudodiaphragm. The smell tastes slightly of phenic acid. The microscopic investigation shows brown olive spores in mass, globose, smooth with slight ornamentation, guttulate, 4-5 μm.

Cultivation –
The Lycoperdon utriforme, although saprophyte, is a fungus that even for its very common diffusion does not today have a particular interest in cultivation.

Uses and Traditions –
The Lycoperdon utriforme should be considered as a fungus whose consumption is not generally appreciated because it is devoid of consistency. It is therefore not recommendable even if technically edible, as long as it is a young specimen, when the gleba is white, which is also used to be eaten sliced ​​and breaded like a cutlet. A 2005 study of the antimicrobial activity of several fungi of the Lycoperdaceae revealed that the Handkea utriformis (synonym of the Lycoperdon utriforme) has a significant activity against a large number of bacteria, including Bacillus subtilis, Escherichia coli, Klebsiella pneumonia , Pseudomonas aeruginosa, Salmonella typhimurium, Staphylococcus aureus, Streptococcus pyogenes and Mycobacterium smegmatis. On the other hand, Handkea utriformis has little antifungal activity against Candida albicans, Rhodotorula rubra and Kluyveromyces fragilis species.
Furthermore, a study of copper and zinc concentrations in 28 different edible fungi species showed that Handkea utriformis selectively bioaccumulated both copper (251.9 mg of copper per kilogram of fungi) and zinc (282.1 mg Zn / kg of fungi) at higher levels than all the other mushrooms tested. The authors noted that these elements are important nutritional requirements for humans and that the Handkea utriformis can be considered a good source of such elements in the bioavailability for the small intestine.

Preparation Mode –
Some are eaten sliced ​​and breaded like a cutlet. A recipe provides, using only the meat (gleba), which must be perfectly white and firm; that it is sliced; after which these slices should be cooked in a pan with butter, a handful of chopped parsley, the shallot, salt and pepper.