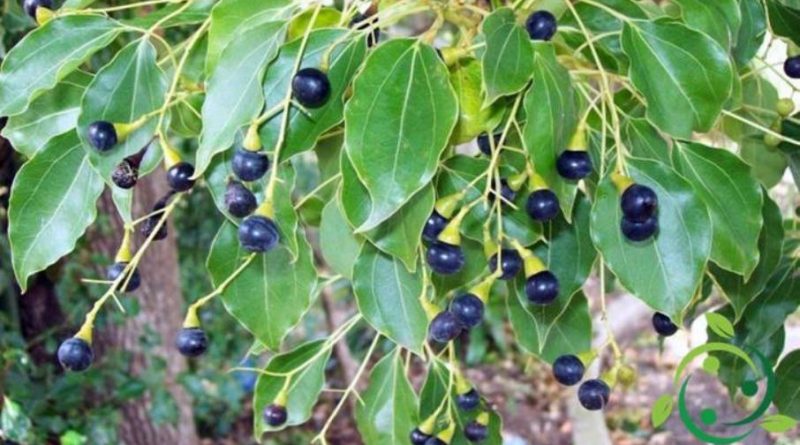 Camphor (or D – (+) – camphor), has a brute chemical formula: C10H16O and is a cyclic ketone, derived from the oxidation of pinene (C10H16). It is a waxy substance with a strong aromatic odor that is extracted mainly from the wood of Cinnamomum camphora (Laurus camphora) and also from the aromatic Dryobalanops (Canfora del Borneo). Other plants on which camphor can be found are the Ocotea usambarensis (Camphor africana) and the Ocimum kilimandscharicum (Bailico camphor). The term camphor derives from the medieval Latin camfora, which in turn derives from the Arabic kafur and the Sanskrit karpoor.
Camphor can be produced starting from a-pinene, very abundant in coniferous oils, and can be distilled from turpentine obtained as a product of chemical maceration. Natural camphor is extracted from adult plants of about 50 years; in the industrial procedure, the leaves and the chopped wood are subjected to distillation with water vapor. A percentage of 1.2-1.5% of camphor and 0.5% of oil is obtained; the percentages vary between summer and winter. Once the Greek camphor is obtained, it has many impurities, such as water, iron, camphor oil, sand, wood which are eliminated by physical and chemical processes. The camphor obtained from the aromatic Dryobalanops (Canfora del Borneo) is particularly prized and expensive.

Camphor has several uses; among these we remember: as a plasticizer for nitrocellulose, antitagma, as an antimicrobial substance, in embalming, in fireworks, explosives, leather substitutes. It is also used for its vapors that protect against the formation of rust and in the entomological collections as repellent for other small insects.
In medicine it is also used as a light local anesthetic and an antimicrobial substance. There are anti-itch gels and refreshing gels that have camphor as an active ingredient. Camphor is an active ingredient (together with menthol) in vaporizing products and is effective as a cough sedative and in other therapeutic applications.
According to some popular traditions, camphor dissuades snakes and other reptiles because of its strong odor. Hindus worship a sacred flame by burning camphor, which is an important part of many religious ceremonies. Camphor is used in the Maha Shivaratri celebrations of Shiva, the Hindu god of destruction and (re) creation.
In the kitchen camphor, as mentioned, is known from ancient times; It is mentioned in the Koran and was used to flavor drinks and since the thirteenth is used in recipes of the Muslim world for many traditional dishes. Even in ancient and medieval Europe it was used as an ingredient for sweets; in China during the Tang Dynasty (618-907) it was used as flavoring, in packs similar to ice cream. Remarkable is the Arabic literature, Andalusian on various camphor-based recipes.
Today camphor is used in Asia as an aromatizer, especially for sweets and can be found on the market in Indian grocery stores where it is labeled as “edible camphor”.
Camphor, beyond certain concentrations, is toxic; it is dangerous especially for children, people over 55 and for those who take larger amounts than those recommended for long periods of time. In large quantities, camphor is poisonous when ingested and may cause seizures, confusion, irritability, neuromuscular hyperactivity, hallucinations, nausea, vomiting and dizziness.