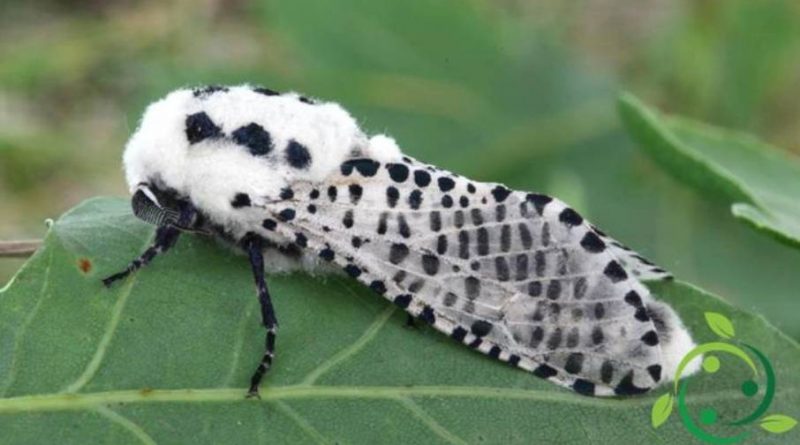 The yellow welter, or leopard moth (Zeuzera pyrina (Linnaeus, 1761)), is a lepidopter belonging to the Cossidae family that causes damage similar to those of the Red Rodilegno; causes desiccation of the affected shoots, loss of mechanical resistance of the affected wooden organs (twigs, small branches and young stems) that tend to break due to the action of meteoric agents or vegetation loads. There is also a general deterioration of the affected organs and plants, especially the young ones, and in addition, they are an indirect cause of entry of fungi caries and cancers. At the adult stage they are recognizable because they are butterflies of about 40-70 mm wingspan, with the front wings of white color, dotted with numerous blackish or bluish spots; they have a white and tomentose thorax which has 6 large bluish spots. The larvae are yellowish with the body covered with blackish tubercles, placed in regular longitudinal rows. The head and the prothorax are blackish and measure about 50-60 mm in length at maturity. The eggs are instead of pinkish color. Let’s see, starting from the morphology and the biological cycle how to fight Zeuzera pyrina in a biological way.
The females of Zeuzera pyrina ovidepolate either in the old tunnels or in the ravines of the rind or, finally, inside lesions of other nature; subsequently the newborn larvae penetrate in the shoots that wilt in a characteristic way, or in the young twigs, where they dig tunnels in the medullary area. Observing the exit holes, it is possible to monitor the activity of these larvae, verifiable by observing the ocher-colored rosures emitted by the holes themselves, which are collected at the base of the plant or at the edges of the holes. These larvae that winter can then, in the following summer:

– flicker, developing one generation per year;
– stay in the larval stage even the 2nd year; in this case the second winter passes like larvae and flicker in the summer of the 3rd year, making a generation in two years.
In order to contain the yellow rodilegno with biological control systems, in recent years, new containment methodologies have been developed that consist of the use of microorganisms, such as the entomoparasite Nematodes of the Neoaplectana genus and of pheromones.
Massive capture is also performed by capturing, in specific chemotropic traps triggered with sexual pheromones, the males which do not fertilize the females and which make them ovide unfiltered eggs: in this way the population is gradually sterilized. The traps should be placed at a density of about 5-10 or 10-20 per hectare depending on the environment and the type of plants. These traps can also be used preventively as it is monitored. Experimentally, entomopathogenic fungi are being tried, such as the Beauveria bassiana; this is very active, even for natural parasitizations, against the rodilegno. Among the natural enemies we can remember the Diptera Larvevoridi (Gen. Phorocera) and some Parasitoid Hymenopterans.
But it is especially important to create a corporate biodiversity through the reduction of crop specialization and the presence of shrubby hedges with different species and grassing that allow the refuge of these and other yellow rodent antagonists. Nitrogenous fertilizations must also be reduced to avoid excessive vegetative growth especially of young shoots. In the absence of these measures the biological fight or, better still, the prevention against this insect is quite uncertain.