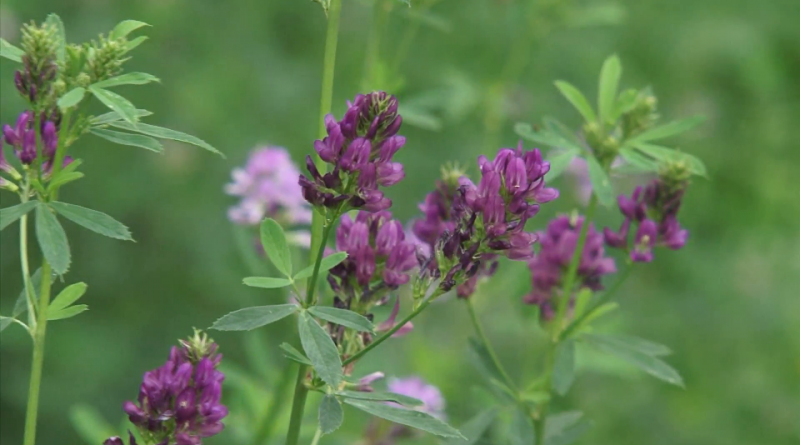 Alfalfa (also known as Spanish herb) or alfalfa (Medicago sativa L.) is a herbaceous plant belonging to the Fabaceae family.

Systematics –
From the systematic point of view it belongs to the Eukaryota Domain, Kingdom Plantae, Magnoliophyta Division, Magnoliopsida Class, Fabales Order, Fabaceae Family, Faboideae Subfamily, Trifolieae Tribe and therefore to the Medicago Genus and to the M. sativa Species.

Etymology –
The term Medicago derives from Media, a historical geographic area occupied by the Medi that occupied a large part of today’s central and western Iran south of the Caspian Sea, the territory from which Theophrastus thought the plant originated; from this derive the ancient Greek “medikai” and the Latin “herba medica”. The specific sativa epithet comes from satum (past participle of sero sowing, planting) sown, planted: which is sown or plant, cultivated, domestic. The vulgar name of “alpha-alpha” seems to derive from the Arabic “Al-Fal-Fa” that is “father of all foods”.

Geographic Distribution and Habitat –
Medicago sativa is a species native to south-western Asia, it is widespread in Italy mainly in Emilia-Romagna, Lombardy, Marche, Veneto. Its typical habitat is that of dry, uncultivated meadows, grassy areas and at the edge of the fields, generally between 0 ÷ 1,200 m, exceptionally up to 1,900 m s.l.m .. 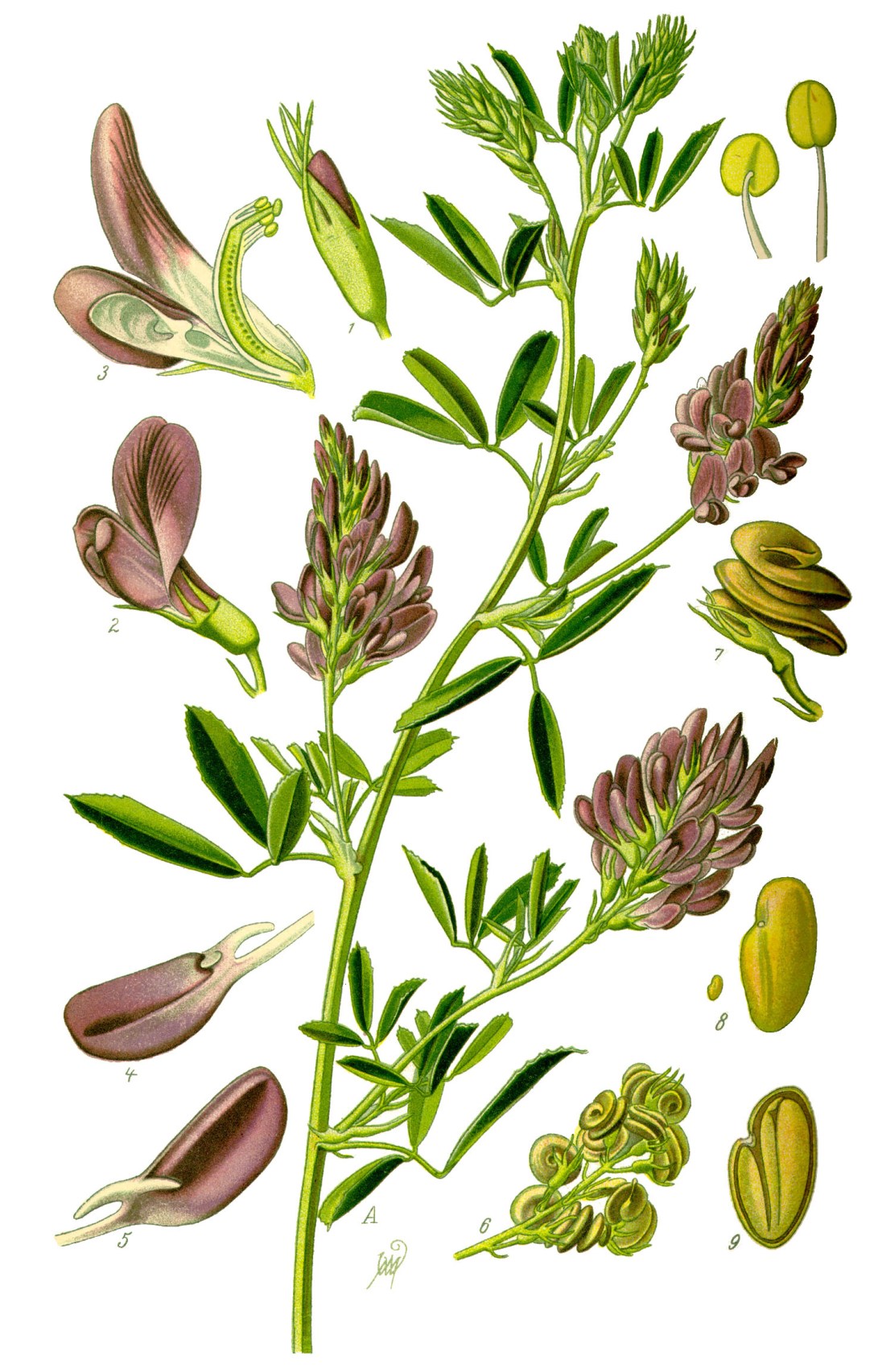 Description –
Alfalfa is a perennial herbaceous plant with an underground rhizome; it has long roots on average 3 to 6 m. The stems are erect, branched, rich in numerous lateral shoots, from which, after cutting, new stems are produced. The plant reaches a height between 30 and 80 cm. The leaves are linear, oblong, alternate, trifoliate, with denticulate margin, truncated-mucronate apex; the median leaflet is provided with a short spine. The flowers are violet-blue-dark purple, more rarely whitish; they are gathered in racemes at the axils of the leaves, penta petals; the two lower petals are more or less welded together and form the hull; on the sides two more petals and on the top the fifth petal, said banner or banner has a darker ribbing.
The fruits are spiraled legumes with 2-3 turns with a cross-linked and pubescent surface with numerous shiny seeds inside.

Cultivation –
The medium grass is a forage plant par excellence, mainly used as a hay crop or to produce dried flour. Less frequently it is used with grazing and rarely for ensilage, which is now obsolete. For the cultivation technique consult the following sheet.

Uses and Traditions –
It seems that alfalfa is native to Persia and that it was introduced into Europe by the soldiers of Alexander the Great, in 470 BC. about. In Italy it came between 200 and 150 a.C. and the Latin writers praised its qualities. Subsequently during the barbarian invasions, its cultivation in Europe was almost abandoned, so that in Italy it remained almost unknown until 1500, when it was reintroduced with seeds imported from Spain, (hence the vulgar name of grass Spain) where it was again spread by Arab.
As forage it is the most used species among legumes because it has a high protein and vitamin content (carotenes) and the possibility of being generally preserved in the form of hay or flour. The medical flour is classified in all respects among the concentrates, for the reasonable protein value, of the order of 20%. On the other hand, the energy value is low.
The use of fresh fodder or grazed forage requires special measures to prevent the occurrence of meteorism in ruminants. It is a very good nitrogen-fixing species (due to the presence of the Rhizobium meliloti bacterium). For its root system and its residues improves the soil structure. It is also an excellent mellifera plant.
Medicago sativa contains digestive varienzymes, phytoestrogens, different bioflavonoids (with antioxidant, anti-inflammatory, strengthening of blood vessels), flavones (strengthening of fragile capillaries), glucosides, alkaloids (supporting antibiotic activity, anti-inflammatory, promoting protein formation), amino acids, vitamin A, vitamin C, vitamin D, vitamin E, vitamin K, vitamin U, minerals, trace elements, high amounts of chlorophyll (excellent for the treatment of anemia).
It is an excellent detoxifier of the liver. Taken before meals increases gastro-intestinal activity. Taken after meals improves nutrient absorption. Improve the quality and quantity of breast milk during breastfeeding.
It is a commercial source of chlorophyll.

Preparation Mode –
Alfalfa can be used in the kitchen; the leaves can be eaten raw or cooked as vegetables, while the seeds are germinated and used to flavor salads. According to some studies, Alfalfa would be an excellent food for human consumption. It is possible to make bread and the leaves can be used to make tea.