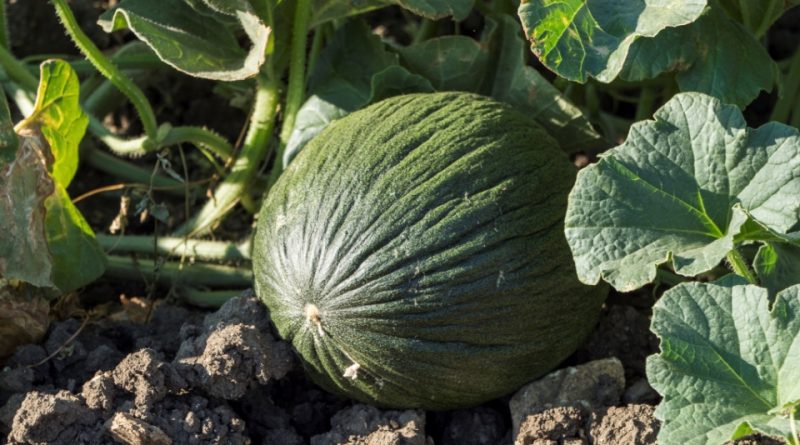 The Muskmelon (Cucumis melo L., 1753) is a herbaceous species belonging to the family Cucurbitaceae, widely cultivated for its edible fruits.

Systematics –
From the systematic point of view it belongs to the Eukaryota Domain, Kingdom Plantae, Magnoliophyta Division, Magnoliopsida Class, Cucurbitales Order, Cucurbitaceae Family and therefore to the Cucumis Genus and to the C. apple species.

Geographic Distribution and Habitat –
Cucumis melo is a species, according to some authors, of probable African origin; for others it is instead of Asian origin and more precisely of ancient Persia. Today the melon is cultivated in all countries with a temperate climate. 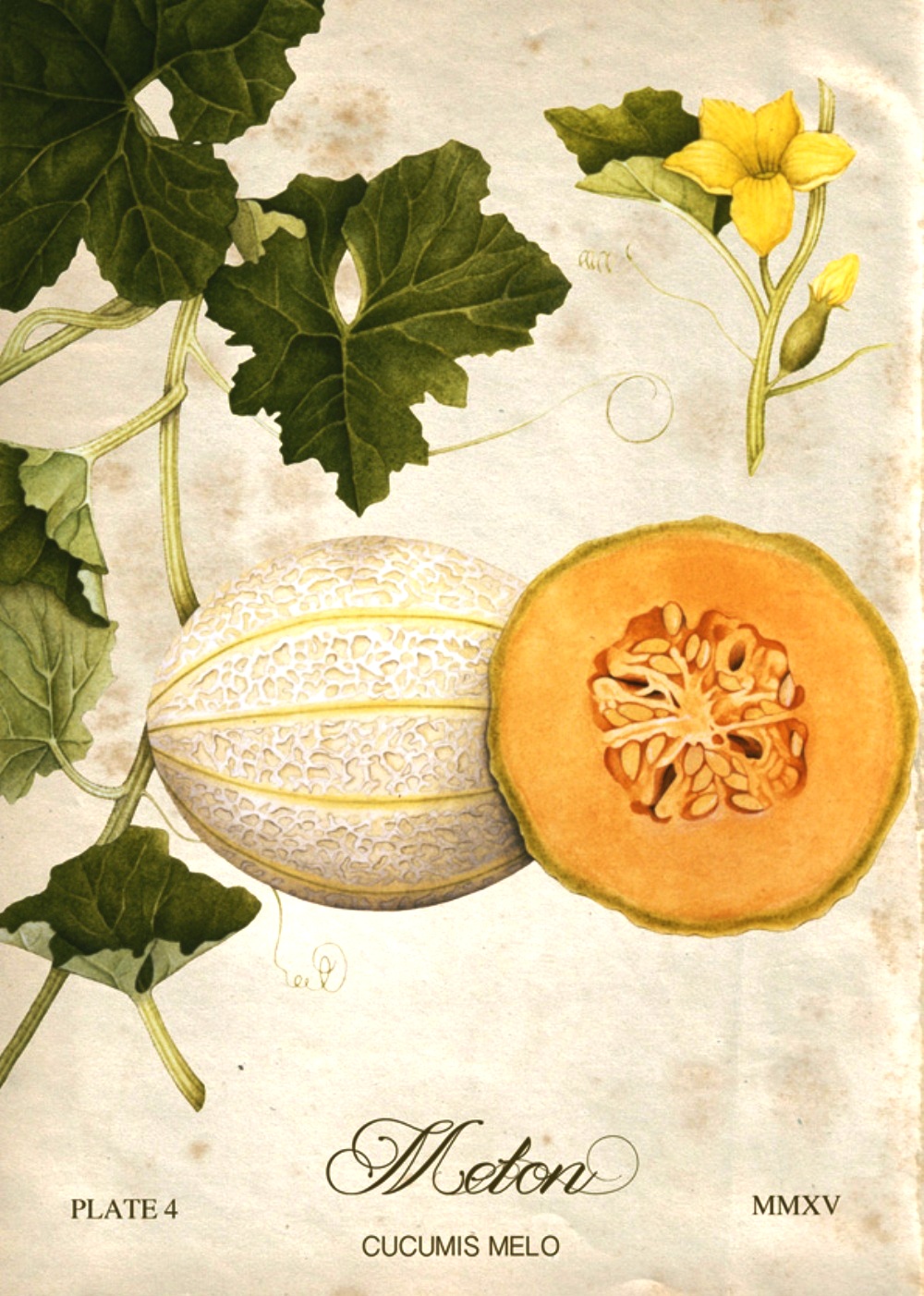 Description –
The Muskmelon is a creeping or climbing herbaceous plant, annual with fibrous roots that can extend into the earth even over 150 cm: The stem is rich in hair, branched, with cirrus, alternate leaves, opposite to the cirrus, lobed and roped at the base, with a length equal to the petiole of about ten centimeters. The flowers of this species are yellow with 5 lobes, generally with unisexual flowers brought from the same plant; the male flowers normally appear before the female ones; the male flowers are in bundles of 5-10, while the female ones are single or paired and appear later on the third generation branches. Only 10% of the flowers attach to give fruit.
The fruit of the melon is voluminous, oval or round and the skin is almost smooth or slightly wrinkled with color that can vary from pale yellow to dark green. The pulp, on the other hand, varies from white to orange, also through light green, and is juicy and very fragrant when it reaches maturity. Numerous seeds are contained within the fruit.
The melon grown today, even if it comes from the species Cucumis melo, has given life to many varieties; the most important are:
– cantalupensis or cantaloupe group; these are melons with medium-sized fruits, with a reticulated surface, yellow-orange flesh; the term derives from the Asian missionaries who brought these fruits to the pontifical castle of Cantalupo, on the hills of Rome;
– reticulatus group, or netted melons; they have medium-sized fruits, white or yellow-green pulp, with a reticulated surface;
– inodorus group; these are the winter melons, with whitish or pinkish pulp with smooth peel, with an intermediate taste between the pear and the melon;
– flexuosus group; they are the snake or tortarelli melons and are used raw in the same way as the cucumber;
– momordica group; they are bitter melons, used mainly as medicinal plants because they are rich in vitamin A, C and E.
The term melon indicates both the fruit and the plant itself, depending on the contexts in which it is used.

Cultivation –
Muskmelon is a horticultural crop that is grown especially intensively. Due to its agronomic characteristics, the melon can not return to land before several years have passed, both for nutritional reasons and for parasitic attacks. It is sown in the period between April and May) with temperatures of at least 14-15 ° C. For more details on its cultivation you can consult the present sheet.

Uses and Traditions –
Cucumis melo is a species of ancient cultivation. In the 5th century BC the Egyptian people began to export it in the Mediterranean basin and arrived in Italy in the early imperial age, as Pliny reports in the first century AD, in his book Naturalis Historia which conformed it to the cucumber in the form of quince, melopepaes.
However, recent discoveries have questioned the previous beliefs about the origin of this plant. New archaeological discoveries made in Sardinia, where they were found, in the archaeological site of Sa Osa in Cabras, in the province of Oristano, not far from the place where the statues of the Giants of Monte Prama were found, melon seeds referable to the Bronze Age (between 1310-1120 BC, in full nuragic age), then in a well antecedent age.
In ancient times the melon was combined with the symbol of fertility, because of its numerous seeds. Melon was also combined with the concept of fool and clumsy (a fool was called mellone and a mellonaggine stupidity). According to the De Gubernatis, the reason was linked to the generating capacity of the melon, uncontrolled, opposed to the reason of intelligence.
But the melon was also considered a harmful fruit. Some doctors considered them harmful and caused the death of four emperors and two popes. The Roman naturalist Castore Durante (1529-1590) in his new Herbarium of 1585 warned not to abuse these fruits because they “diminish the genital seed” and do not recommend its use to diabetics, dyspeptics and to all those who suffer from disorders of the apparatus digesting, promoting the refreshing, diuretic and laxative virtues for all others.
It was during the Roman Empire that the cultivation and consumption of melon spread rapidly. Its use was however as a salad and the emperor Diocletian issued a special edict to tax those specimens of melon that exceed the weight of 200 grams.
In the literature we find many references to the melon. Alexandre Dumas (father) wrote “to make the digestible melon, you have to eat it with pepper and salt, and drink over half a glass of Madeira, or rather Marsala”; this makes us understand how they were consumed and appreciated by the writer; so much so that he made a request to the library of the city, an exchange between his works and a life annuity of 12 melons a year, which happened until his death in 1870. It was in his honor that the brotherhood was established of the Knights of the Cavaillon melons.
Today the populations of cultivated melons are many and the result of an ancient and patient selection; unfortunately they tend to be supplanted by the more uniform F1 hybrids.
Among the typical Italian varieties deserves a mention of the Melon purceddu of Alcamo, which is a green peel, is a Slow Food presidium with particularly fine organoleptic characteristics.

Preparation Mode –
Muskmelon fruits are consumed both raw, as appetizers and as desserts. Some recipes include the use of melons to make compotes and jams. The melons to have a high quality value must be fragrant, emanate a fragrant fragrance that denotes the right maturity. For their conservation, keep in mind that you never place them at temperatures below 5 ° C, in order not to cause damage and freezing of the pulp.