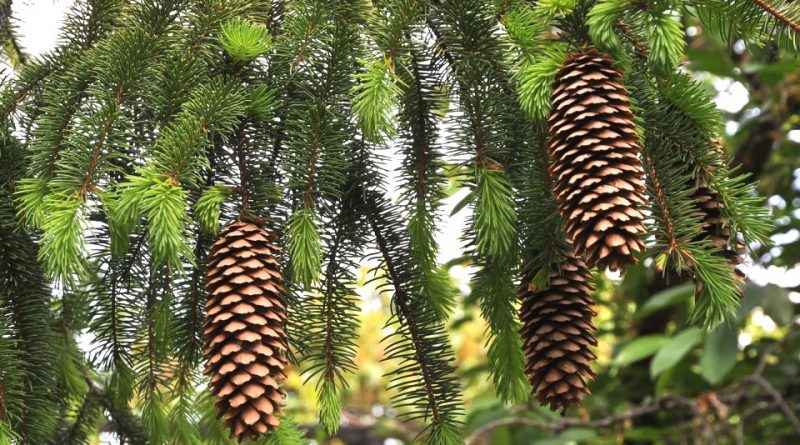 The Peccio or spruce (Picea abies (L.) H.Karst., 1881) is an arboreal species of the Pinaceae family. The term Picea excelsa (Link) is synonymous.

Systematics –
From the systematic point of view it belongs to the Eukaryota Domain, Kingdom Plantae, Pinophyta Division, Pinopsida Class, Pinales Order, Pinaceae Family and therefore to the Genus Picea and to the Species P. abies.

Etymology –
The term Picea derives from picea which is the Latin name of the wild pine in Virgil and Pliny. The specific epithet abies comes from Abies -tis, classical Latin name (Virgil, Egloghe), derived from the Sanskrit root abh gorgare (of the resin).

Geographic Distribution and Habitat –
Picea abies is a species that characterizes the phytoclimatic belt of the Picetum from which it takes its name, but it is not infrequent to find it also, in natural diffusion, in the Fagetum and in the fresh valleys in the Castanetum area even at 300-400 m altitude in the Alps Orientali, in the Canton Ticino and the Lombardy Alps, where the high summer nebulosity, dampens the heat; similarly happens for the maximum altitude, which is reached in the Western Alps at about 2200 meters, while it goes down in the Eastern ones where it reaches, in the best conditions, at most 1800 m.
In Italy it is present spontaneously in the Alps from Liguria (with a wreck in the upper Val Tanarello) to the Julian Alps, some populations are also known wrecks in the Tuscan-Emilian Apennines (valley of the Sestaione at the Abetone Pass), elsewhere the peccio has been widely cultivated for reforestation. In the alpine arc, the red fir tree forms woods of considerable extension only starting from the north-western section of the Maritime Alps (Vallone del Boréon), but up to the Valle d’Aosta it is often subordinated to the white fir in the mountain horizon and to the larch in the subalpine one. The spruces extend more in the central and eastern Alps, where this species takes advantage of ideal climatic conditions, especially summer (moderate heat and regular rainfall in the summer quarter), climatic factors that appear to be more distributed in the eastern alpine areas. 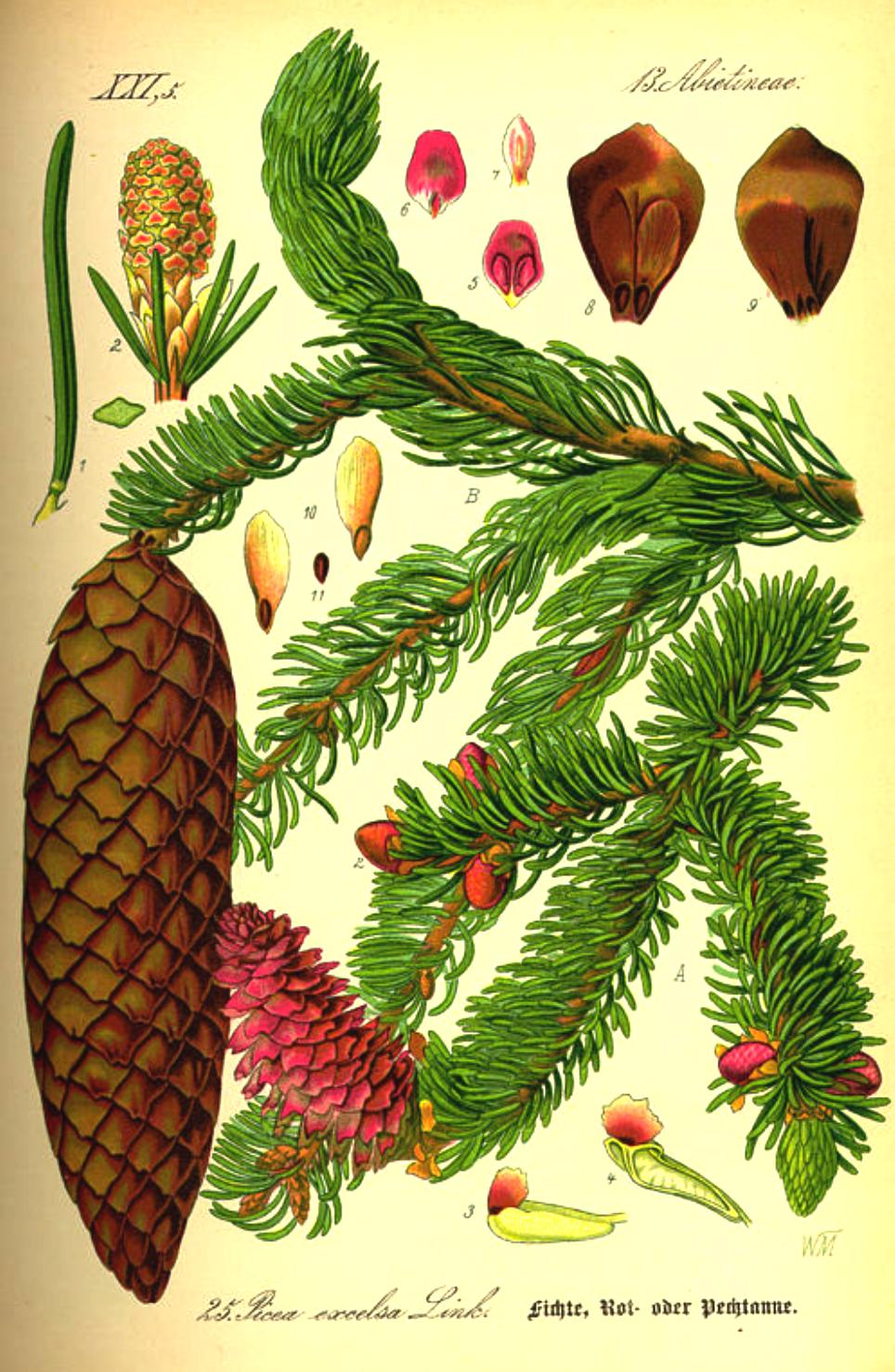 Description –
The Spruce is an arboreal species that can reach 40 meters in height, with a straight trunk and relatively narrow conical crown, even though the bearing can be differentiated according to the altitude due to the high polymorphism of the species. The bark is thin and reddish that with age becomes brownish-gray and divides into roundish or almost rectangular plates (about 1-2 cm). The leaves (needles) have a quadrangular section, up to about 2.5 cm long, inserted on raised pads placed all around the sprig, with a tendency to be arranged on a horizontal plane. The flowers, which are sporophylls, ripen in the period between April and May; these are female (macrosporophyll) which give rise after pollination to the strobile and male (microsporophyll). The strobili (pine cones) are cylindrical, pendulous, 10-20 cm long and 2-4 cm broad, at first green or reddish, then brown (in autumn) that ripen whole when ripe. It is a species that fructifies late (between 20 and 50 years).

Cultivation –
Spruce is grown essentially or for protective or protective-productive purpose. It is a precious species for reforestation, is easily cultivated in nurseries and takes root very well in the woods. It is a species that plays an important precipitation regimen, thanks to the water intercepted by the crown; it is also useful, when planted in groups, to interrupt the continuity of the snowpack and avert the risk of avalanches even if it is easily swept away once the mass of snow has broken off. This species has an average productivity of about 500 – 600 cubic meters per hectare for which, also from the production point of view, it plays an important role. To try to promote natural renewal, different methods of cutting are applied, namely: cut into strips, cut into holes and cut into strips. For details of the cultivation technique, see the following sheet.

Uses and Traditions –
Picea abies is an essence of great forestry and technical use. Its wood of excellent quality, white-yellowish, soft, is used above all in the building sector but, thanks to its exceptional resonance properties, it is used in violin making for the construction of boards and harmonic boxes for musical instruments. For this last use a particular type of spruce is used, often designated, commercially and in violin making, as “male fir”, whose wood presents anomalies of accretion of the annual rings (tapping); in fact, it has been researched for centuries by luthiers and builders to create the soundboard of various stringed musical instruments, including stringed instruments (violins, violas, cellos …) as well as harpsichords, pianos, classical guitars. The geographical distribution of this tree is limited to a few European areas; it is only present in some Alpine districts of Germany, it is absent in Austria and, recently, it has also been discovered in Valle di Ledro, on Mount Tremalzo. Numerous musical instruments, even of illustrious violin makers of the past centuries, appear to have been made with resonance timber from the Val di Fiemme and the Paneveggio forest in the province of Trento, as well as the Val Canale and the Tarvisiano in the province of Udine.
The same Antonio Stradivari (Cremona, 1644 – 18 December 1737) the most famous Italian violin maker, to make his amazing violins, was supplied by the Magnifica Comunità di Fiemme. This wood is currently used by famous concert pianist manufacturers, such as, for example, Bechstein, Blüthner, Fazioli.
In addition, spruce is one of the most long-lived plants in the world. A clonal specimen, discovered in Sweden in 2004, and dated to carbon, would have a full 9550 years, making it the oldest clone living organism on the planet. This specimen was named Old Tjikko.
The fir tree supplies the main raw material for the production of cellulose and holds a high share of wood for industry and wood chips for the production of panels. Thanks to the large quantities of wood chips from the forest or industry, its use for energy purposes is widespread. Wood chips and sawdust are also marketed as fuels in the form of brikett or pellets.
From the resin of this tree is obtained the turpentine that is used in the paint industry and in cosmetics.

Preparation Mode –
An essential oil is extracted from the Picea abies. For this purpose, the foliar twigs with a diameter of no more than 1.3 cm are collected to ensure that the essential oil has that characteristic citrus and fresh note that is lacking in oils dominated by wood or resin. In fact what distinguishes the oils from resin (or wood) from those from leaf is precisely the presence of some oxygenated compounds that lead to the characteristic note fresh from pine needles. The resin oils (turpentine) are instead dominated by monoterpenic hydrocarbons that flatten the aromatic profile. Its chemical characteristics are very varied: beta-pinene ranges from 5 to 32%, and alpha-pinene from 14 to 21%. The canfene ranges from 7 to 27%, and the limonene from 10 to 16%. Also present the bornyl acetate but in small quantities (3-5%). It is a colorless to pale yellow liquid, with a very bright and clean pine note and a woody character reminiscent of the ionones. Powerful final note, sweet, resinous and with wood. However, it must be avoided if it is oxidized because it can cause skin sensitization.