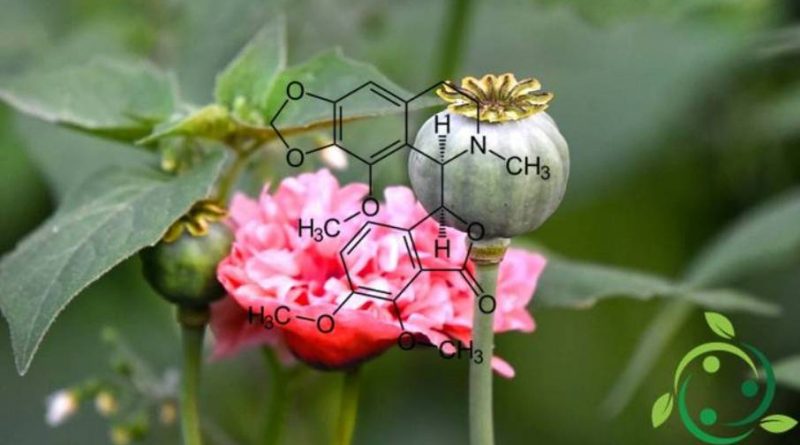 Noscapine ((3S) – 6,7-Dimethoxy-3 – [(5R) -5,6,7,8-tetrahydro-4-methoxy-6-methyl-1,3-dioxol (4,5-g) isokinolin-5-yl] – 1 (3H) -isobenzofuranone), whose brute chemical formula is: C22H23NO7, is an alkaloid contained in the latex of the Papaver somniferum species. In the natural Papaver somniferum noscapina is contained in low concentrations, but in Australia a poppy variety has been obtained that produces high amounts of isokinolin alkaloids such as noscapine. This particular opium poppy clone is reproduced and cultivated in Tasmania’s legal plantations.
The Noscapina was isolated and characterized for the first time in 1817 by the French chemist Pierre Robiquet who called it Narcotine (Narcotina). Narcotina and noscapina are synonyms.

Through some research and studies, for the first time in the early 1990s, a promising anti-tumor activity by noscapine was demonstrated.
Noscapine is a central antitussive with mild narcotic activity. The antitussive effect seems due to its ability to act as a sigma (σ) receptor agonist. This pharmacodynamic activity has been found in research on rats, in which a pretreatment of guinea pigs with rimcazole, a specific antagonist of sigma receptors, reduces the anti-tussive activity of noscapine.
Another application of interesting value is that of anti-tumor activity; through several studies have shown the anti-tumor efficacy of noscapine against different types of carcinomas. The mechanism of action seems to be linked to the fact that noscapine binds tubulin by altering its conformation, thus preventing the assembly of microtubules in the cell and blocking their duplication, favoring apoptosis in some way.