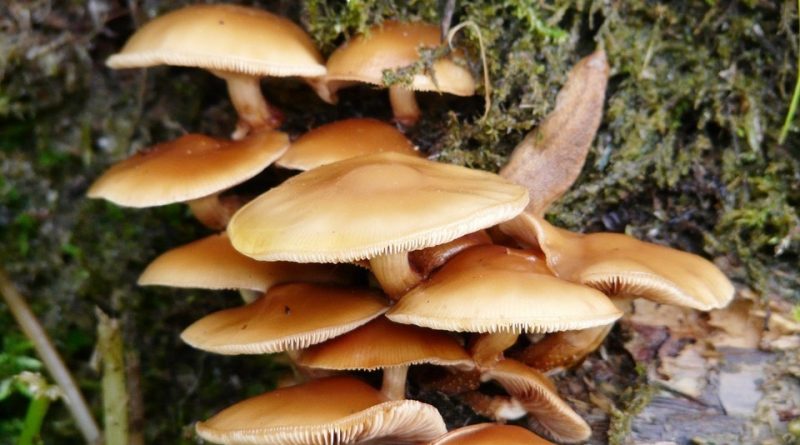 Etymology –
The term Flammulina is the diminutive of flámma, flame: flame, small flame: for the typical reddish color of the carpophore. The specific epithet velutipes derives from the modern scientific Latin velutinus (see) and from pes pedis foot, stem: ie with the stem or velvety stem.

Geographic Distribution and Habitat –
Flammulina velutipes is a lignicolous fungus found on decaying stumps especially in deciduous forests. It is also found in large saprophytic colonies or at the expense of live broad-leaved stems such as elm, poplar or ash, willow, rarely found on conifers. It is found from the advanced autumn to the beginning of spring. 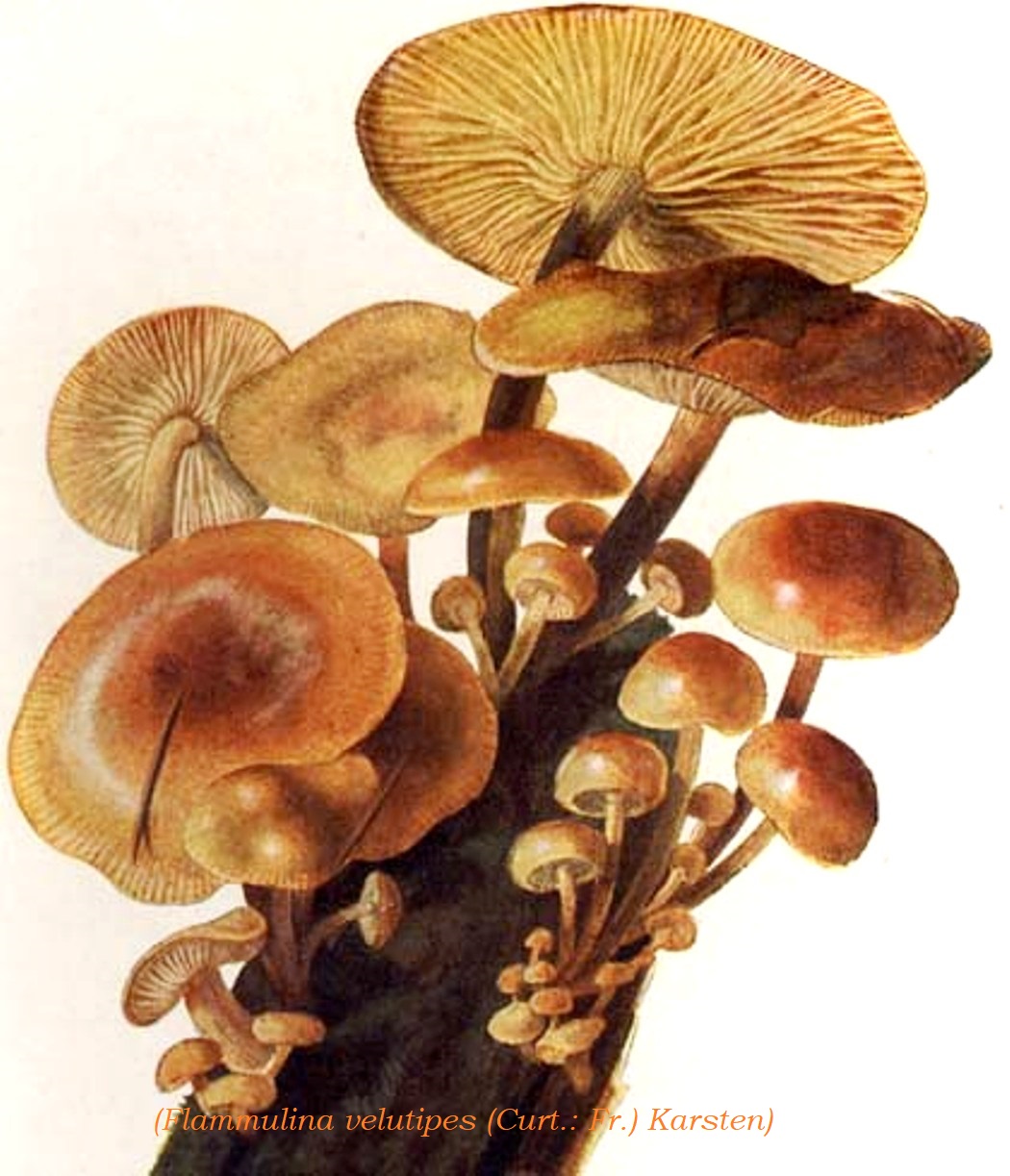 Description –
Flammulina velutipes is characterized by a hat of 3-6 cm of diameter, from hemispheric to convex and at the end flat or depressed, not very consistent and strongly elastic, almost rubbery, of an intense yellow-orange color, darker in the center and shaded at the margin; this is almost sticky in wet weather. The lamellae are adnato-smarginate, almost free to the stem, ventricose, of cream-straw-white color, interspersed with lamellule; in the adult fungus they are stained with brown-rust. The stem is 5 to 9 cm long; it is thin and cylindrical, lithe and irregularly colorless to the hat in the upper part and decorated with darker velvet towards the foot; it is hard, cartilaginous, sometimes eccentric, rooted. The flesh is yellow, thin and elastic in the hat, while it is fibrous and tending to brown in the stem; it has a little perceptible odor, which tastes like geranium, with a pleasant taste. Microscopy shows spores of 7.5-10 x 3.5-4.5 μm, sub-cylindrical ellipsoids, smooth, hyaline, non-amyloid, acyanophile and white in bulk; the basidia are 35-40 x 4-5 μm, tetrasporic and clavate; the cheilocystids are 45-65 x 10-15 μm, scattered, fusiform or clavate, with the extreme rounded and long basal peduncle; the dermatocystidia are 50-120 x 6-10 μm, sub-cylindrical, with a 0.5 μm thick wall.

Cultivation –
Velvety Agaric is a fungus that lends itself to cultivation. Much of the production comes from Japan, where it is called Enokitake or the United States. The “pale” color of the cultivated fungus is due to growth in the absence of light.

Uses and Traditions –
The elm mushroom can be classified as a discrete edible and appreciated for the period of growth and for the widespread possibility of meeting.
Among the peculiarities of this fungus it is recalled that in 1993, cultures of Flammulina velutipes were brought on board the Space Shuttle Columbia, in order to determine the reaction of mushroom growth in the absence of gravity. Mushrooms have grown in all directions ” losing their orientation “.
Many studies have been conducted on this fungus both in China and Japan, where the use of macrofunges for therapeutic purposes has been consolidated for thousands of years. In Japan, a study was carried out on 174,505 inhabitants of the Nagano area. The cancer mortality rates of the general population were compared with that of Flammulina velutipes growers over a period of 15 years (1972 to 1986); it turned out that the mortality rate of these farmers is 97.1 out of 100,000 compared to 160.1 cases per 100,000 of the general population, with the indication that this decrease could be traced back to the greater consumption of these mushrooms.
Also in the same area from 1998 to 2002, a further controlled study was conducted to investigate the relationship between reduction of stomach cancer risk and intake of edible mushrooms using the epidemiological index Odds Ratio (OR), with which defines the cause-effect relationship between two factors, for example between a risk factor and a disease. If the OR value is greater than 1, the risk factor being studied is or may be implicated in the onset of the disease; if the OR value is less than 1, the risk factor is actually a defense against the disease. It was found that while OR in subjects who ate mushrooms occasionally or less than once a week was 1.00, the consumption of F. velutipes, more than three times a week, produced a reduction of OR to 0.66, while that of those who ate Lentinus erodes (Shiitake) more than three times a week was 0.95.

Preparation Mode –
Flammulina velutipes should always be harvested young and fresh even when it is in the snow, making sure it is not frozen. The smallest and most closed specimens can be preserved in oil or natural. The stems are cut below the first upper centimeter; It is a very sticky, even glutinous species on the cap, so it is good not to wash them under water (to avoid excessive drip) but clean the caps with a damp cloth or sponge. Only small and closed specimens for preservation are well washed. The hats are not sliced ​​but cut into coarse pieces, leaving the smaller ones whole. It is not possible to eliminate – during cooking – the vegetation water, because the gluten produced prevents it. It should also be remembered that mushrooms should be cooked as soon as possible, better on the day of collection; at the limit, after having cleaned them, they can be kept in the refrigerator for no more than a day.