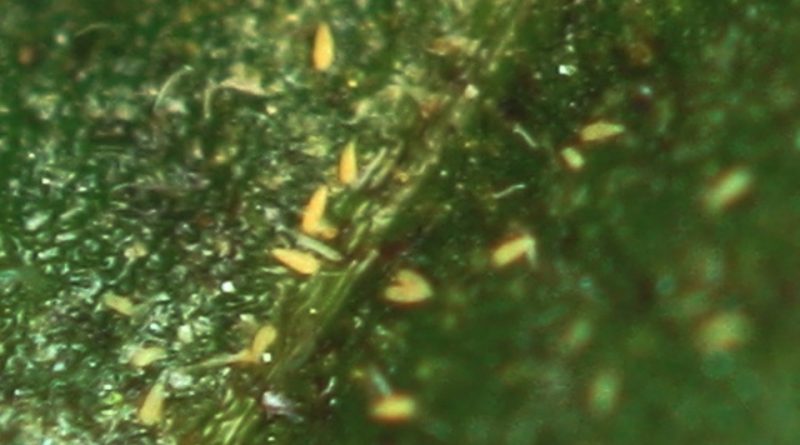 The rusty tomato Eryofida or rusty tomato mite (Aculops lycopersici (Massee)) is a small mite belonging to the Eriophydae family.

Systematics –
From the systematic point of view it belongs to the Domain Eukaryota, Kingdom Animalia, Sub-Eumetazoa Suborder, Phylum Arthropoda, Class Arachnida, Order Acarina, Family Eriophydae and then to the Genus Aculops and to the A. Lycopersic species.
The term is synonymous: Vasates lycopersici (Massee).

Geographic Distribution and Habitat –
Aculops lycopersici is a mite described for the first time in Australia by Massee in 1937, but is now common throughout the world. It is also widespread in Europe and especially in southern Italy, in the islands but sightings have occurred in other regions.

Morphology –
The females of Aculops lycopersici have a vermiform aspect of yellow-ocher color. The dimensions of the rusty artyroids (as of all the eriophytes in general) are somewhat reduced: the females are just 0.15 to 0.18 mm long. The eggs of this mite are irregularly spherical, hyaline just deposited and then become yellowish afterwards.

Attitude and biological cycle –
Aculops lycopersici is a particularly important parasite in tomato crops. In cold climates this eriophis survives only in a protected environment where generations follow each other passing from spontaneous plants to those cultivated and vice versa. The females lay mainly on the leaves of tomatoes about 50 eggs, placing them near the ribs or at the base of the hairs. When favorable conditions occur (around 27 ° C and 30% relative humidity) a generation can be completed even in a week, passing through the stages of egg, nymph of I age, nymph of II age and adult.

Ecological role –
The Aculops lycopersici attack determines on the stem alterations of the epidermal tissues that first take on a green-bronze color and then with brownish tints. The leaves are deformed, curling at the edges and bending downwards; the color turns from green to brownish-green to bronze. In addition to these symptoms, during the production phase we can have: longitudinal cracking of the stems, early fall of the leaves, fall or irregular fructification of the inflorescences, formation on the fruits of suberified areas covered by chapping. Like other mites, its proliferation can be determined by incorrect fertilizations, especially with nitric nitrogen, or by the imbalance of its predator biocenosis caused by insecticidal treatments or by use of irrational and inopportune herbicides. For this reason it is always necessary to carry out a preliminary survey before any intervention, to regulate the fertilization systems and to prevent, where possible, its proliferation with possible sulfur treatments for the control of the oidium. Especially in greenhouses, an alternative to the chemical struggle, always dangerous and the bearer of ecological imbalances, is constituted by the introduction of the mite predator Amblyseius andersoni.