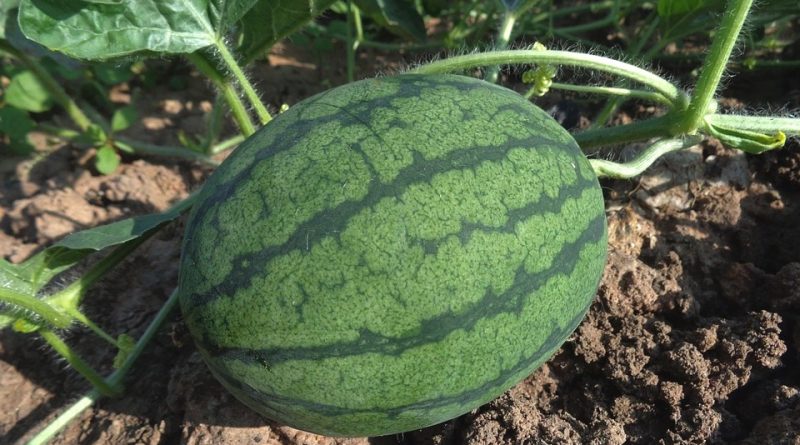 Systematics –
From the systematic point of view it belongs to the Domain Eukaryota, Kingdom Plantae, Division Magnoliophyta, Class Magnoliopsida, Order Cucurbitales, Family Cucurbitaceae and then to the Genus Citrullus and to the Specie C. lanatus.

Etymology –
The term Citrullus comes from the late Latin cetriuolus, which is diminutive of cítrus cedro: small cedar, then vulgarized in Italian citrul. The specific lanatus epithet due to the presence of abundant woolly hairs on stems and vegetative parts.

Geographic Distribution and Habitat –
The Citrullus lanatus, is a species native to the tropical belt of Africa (particularly abundant in the Kalahari desert, where it may have originated) and Asia. Today it is a plant that is cultivated and widespread all over the world, both in the tropical and in the warm-temperate zones. 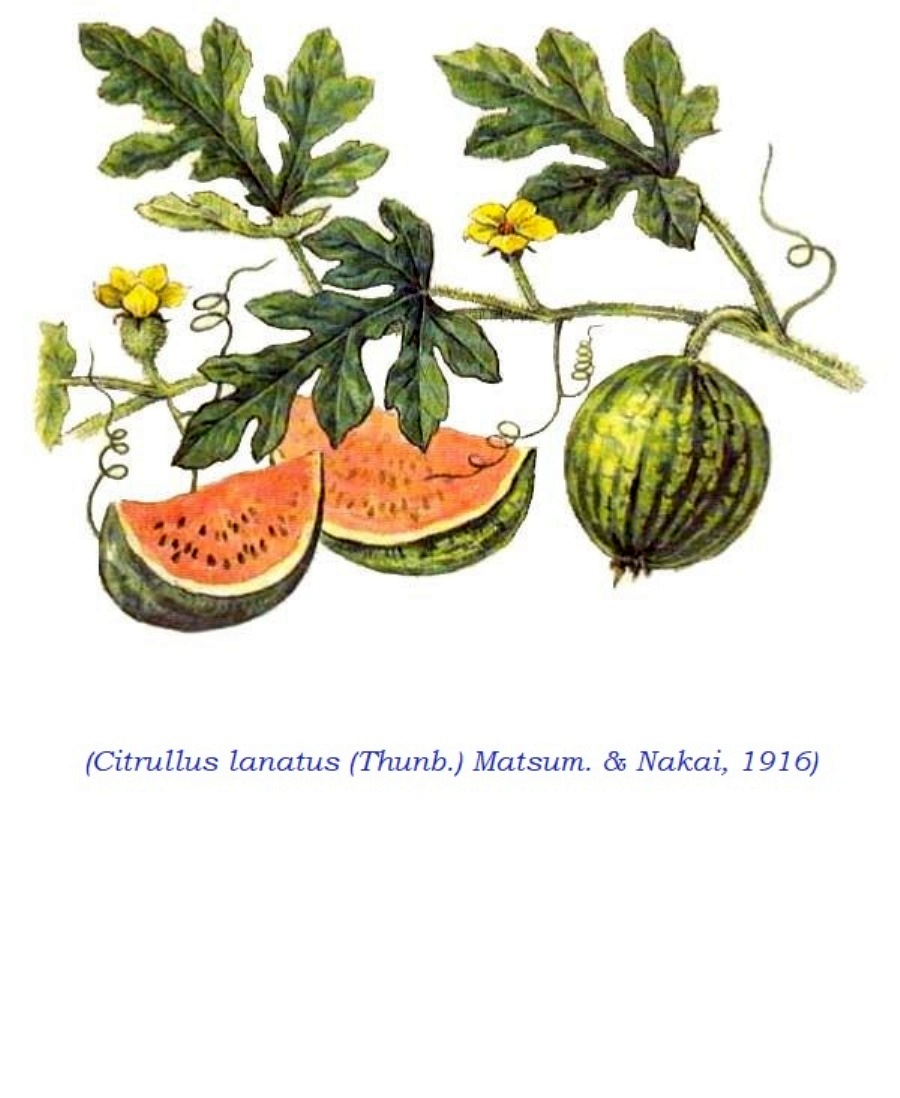 Description –
The Citrullus lanatus is an annual species, characterized by climbing herbaceous stem, large and hairy three-lobed leaves and with male flowers and feminine flowers. The fruit is a false berry (peponide), voluminous and of round or oval shape, which can reach and exceed 20 kg in weight, with smooth, hard and relatively thin skin, green with various streaks and lighter spots between the white or yellowish. The pulp is red (but depending on the varieties also yellow, orange or white) and rich in seeds, black, white or yellow. The main constitution of the pulp is water (about 90%) together with a discrete content in sugars, vitamins A, C, B and B6.
Fruit ripening takes place, also depending on the weather conditions and the sowing period, between May and September.
This species is characterized by a very high number of varieties, fruit of genetic variability but also and above all of human selection. Today there are over 1200 watermelon cultivars that produce fruits of varying weight, size and color.

Cultivation –
Watermelon is a good renewal crop that, due to its tendency to exploit the soil, should not return to the same soil before 4-5 years either to restore fertility or to reduce the risk of parasitic attacks. It requires deep working and good soil refinement. For the cultivation technique you can consult the specific sheet.

Uses and Traditions –
The Citrullus lanatus is an Italian species cultivated on more than 14,000 hectares. This vegetable takes different names depending on the regions where it is grown and consumed. The name “cocomero” prevails above all in central Italy, and this derives, as mentioned by the Latin cucumis, that is “cucumber”. The term watermelon prevails in the Po Valley and in Sardinia and the melon in the southern regions; this term derives instead from the late Greek ἀγγούριον (angoúrion, “watermelon”, “wild cucumber”) and entered the Italian language in the Byzantine era through the Exarchate of Ravenna. Sardinian sínria is also used in Sardinia, which is a Catalan term of Arabic origin.
The term water melon or mussels of water, which is widespread in southern Italy, comes from the French melon d’eau, which in turn derives from the Latin mēlōne. But this plant is known by other dialectal names, which vary from region to region depending on the influences of different dominations in the course of history.
The historical and archaeological finds do not allow us to establish exactly when the watermelon was first cultivated, but the first evidence is found in some hieroglyphics in Ancient Egypt of almost 5000 years ago. The fruits of the watermelons were often placed in the tombs of the pharaohs as a means of subsistence for the afterlife. Also in Egyptian mythology the watermelon originated from the seed of the god Seth (also Sutekh, Setesh, Suty or Set; in Greek Σήθ, Sēth); an Egyptian deity belonging to the religion of ancient Egypt, god of chaos, desert, storms, disorder, violence and foreigners. Documents on the cultivation of watermelon occur in China in the 10th century AD. Later this plant was introduced into Europe with the invasion of the Moors in the 13th century.

Preparation Mode –
The fruits of the watermelon are consumed in Italy especially as fresh fruit cut into slices alone or in fruit salads. With the watermelon we also prepare jellies, sorbets, salads and other special recipes and preparations. In the countries this fruit is often consumed cut into cubes served together with other types of fruit, such as pineapple, mango or papaya.