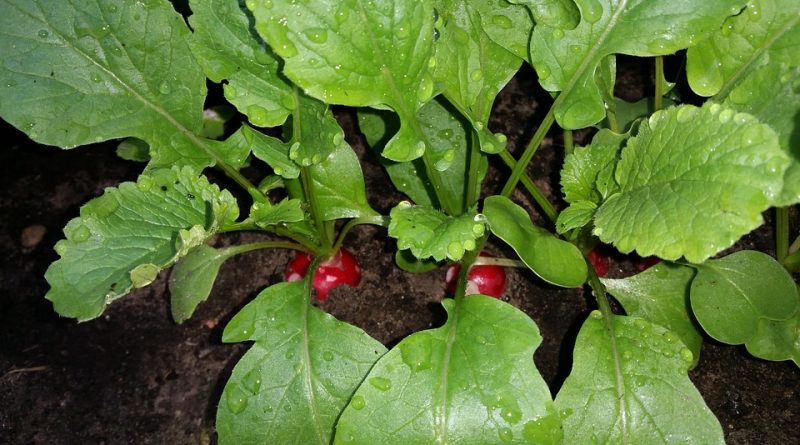 The common Radish or Radish (Raphanus sativus L., 1753) is an edible herbaceous species of the Brassicaceae family.

Systematics –
From the systematic point of view it belongs to the Eukaryota Domain, Kingdom Plantae, Spermatophyta Superdivision, Magnoliophyta Division, Magnoliopsida Class, Subclass Dilleniidae, Order Capparales, Family Brassicaceae and therefore to the Genus Raphanus and to the Specie R. sativus.

Etymology –
The term Raphanus comes from the Greek ῥάφᾰνος ráphanos radha, radish, from ῥα rha, contraction of ῥίζα rhiza root, and from the theme of the verb φαίνω phaíno appear: therefore with visible roots. The specific epithet derives from satum (past participle of sero sowing, planting) sown, planted: which is sown or plant, cultivated, domestic.

Geographic Distribution and Habitat –
Raphanus sativus is a typical herbaceous species native to the cold and temperate-cold areas of Europe, Asia and North America; its natural range is centered on the Mediterranean coasts, but with extensions towards the north and east. It is however a cosmopolitan species but with important gaps: a continent or a climatic zone. 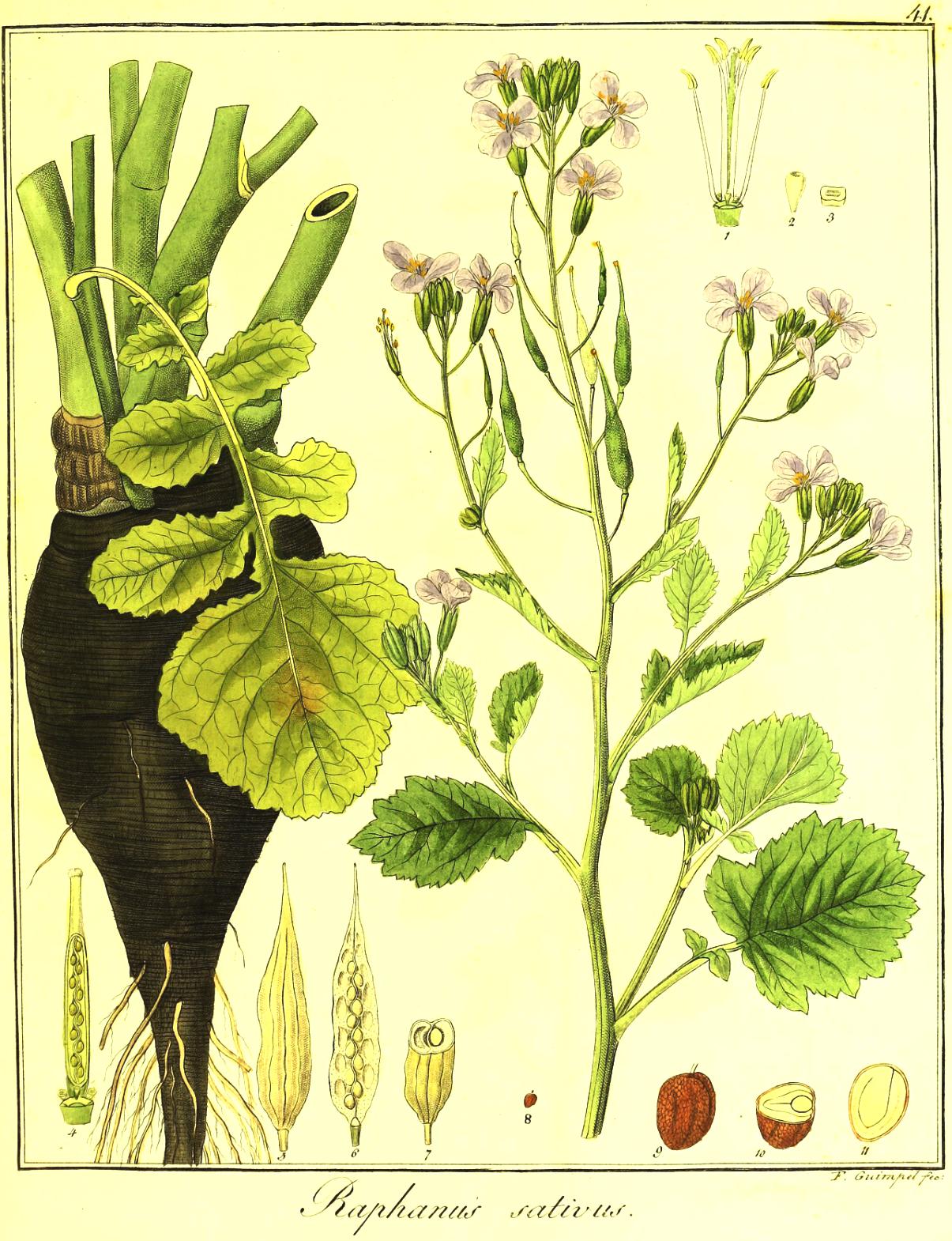 Description –
The common radish is an herbaceous species characterized by an aerial part that shows lobed leaves with irregularly serrated margin. The flowers are provided with four white, pink or violet petals; the fruit is a siliqua that contains reddish, round or slightly elongated seeds.

Cultivation –
The Raphanus sativus is a species that prefers loose soil and well endowed with organic substance; it requires above all medium-textured soils that tend to be calcareous and irrigated. For the technical specifications of its cultivation you can consult the specific sheet.

Uses and Traditions –
The Raphanus sativus is a plant known for several millennia as well as some findings made in old settlements of Greece, China and Egypt. From Pliny the Elder it is known that the ancients cultivated plants called Raphanus which are probably attributable to the modern genus Raphanus. Some writings show that the Greek physician Androcide recommended its use to Alexander the Great to remedy the harmful consequences of excessive use of wine.
Raphanus sativus is a herbaceous plant cultivated for the enlarged hypocotyl, commonly called root, with a more or less spicy and spicy consistency. In Italy it is cultivated on a surface of about 1,000 hectares, mostly in open field. The product is mainly intended for the internal market.
The varieties grown are many and are classified according to the shape and color of the root or the growing season. In Italy the most common varieties for round and red radishes are Cherry Belle and Saxa, for those white and oblong Candela di Ghiaccio, while for the red and oblong radishes, Candela di Fuoco, Ravanello Lungo or Torino or Tabasso.
The common radish contains various substances including “rafanolo”, different sulfur substances, sugars and little starch. Folk medicine recognizes some healing properties as antiscorbutic, anthelmintic (eliminates various types of worms or helminthous parasites), antibacterial, antispasmodic, astringent and stimulating. In particular, the roots would stimulate appetite and digestion.

Preparation Mode –
The predominantly used parts of the common radish are the roots. In Italian cooking, radishes are eaten mainly raw, but you can also enjoy them from cooked: in this case they acquire a delicate flavor and become the protagonists of soups or omelettes. Otherwise the roots are used as an appetizer or seasoning to particular dishes also to perform a function of decoration. Even the young leaves can be eaten raw in salads with other vegetables. As raw they are eaten in salads or alone with salt, oil, pepper, etc .. The seeds if squeezed secrete a rather pungent oil (not suitable for European tastes) used mainly in oriental cuisine.