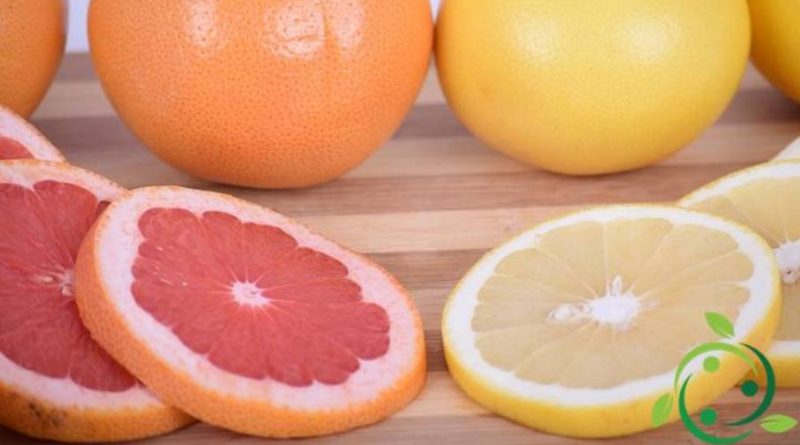 The grapefruit (Citrus paradisi Macfad., 1830) is an arboreal species of Citrus, therefore a citrus fruit, with a particular composition of its juice, characterized by a very low energetic coefficient, containing a lot of water, vitamin C and other antioxidants. These characteristics change slightly in the different grapefruit varieties. In this tab we see properties, benefits and contraindications of grapefruit juice. The grapefruit, compared to the average, is a fruit particularly poor in simple sugars and calories; on the contrary it brings high concentrations of water and only a few traces of proteins. The fiber is not particularly abundant. Lipids and cholesterol are absent. As for vitamins, grapefruit contains good amounts of vitamin C. Among the minerals, the most important content is potassium.
Grapefruit is a fruit rich in naringenin (or naringin), a flavonoid, which gives the characteristic bitterish taste, with antioxidant and hypocholesterolemic properties.
The naringenin contained in the grapefruit administered in the laboratory to the guinea pigs has caused metabolic effects such as: normalization of glycemia, cholesterol and triglycerides, and also a more pronounced weight loss. The slimming effects obtained in the laboratory, with weighted doses, have not been noticed on humans, so it is good to know that the supposed slimming effects of grapefruit have never been found.

One aspect, however, to be explored, is that linked to the interference of naringenin with liver cells, in which it inhibits certain enzymes dedicated to the metabolization of drugs and nutrients. It is evident that an interference of this type can lead to an accumulation of catabolites and increase the risk of toxicity, in case of taking drugs while taking grapefruit juice.
Another action induced by the intake of grapefruit juice can be that of the link between furanocoumarins (contained in the juice) and CYP3A4 (cytochrome P450), thus causing the reduction of the first-pass metabolism of the gut cells (for a period of about 24 hours), thus determining an increase in the bioavailability of the drugs administered.
The inhibition of cytochrome P450 can also have a certain cardio-vascular relevance; according to some clinical research has been shown the increase in absorption of felodipine (a drug that is taken by some patients against hypertension) in the presence of grapefruit juice; this led to the resulting reduction in pressure and increased heart rate.
The same mechanism of action seems to manifest itself in the absorption of certain statins (such as simvastatin, lovastatin and atorvastatin) but not significantly on others (pravastatin, fluvastatin and rosuvastatin). However, this can also have serious consequences on health, especially for elderly patients with the onset of rhabdomyolysis and renal failure.
Other effects noted in patients taking grapefruit juice were those with anxiolytics; a certain increase in sedation has been shown; less efficacy has shown in regards to the ß-blocker acebutolol heart drug.
Other notable interferences noted in the intake of grapefruit juice concern the increase in the toxicity of certain antiarrhythmic drugs (amiodarone, quinidine, propafenone and carvedilol) and the onset of severe systemic vasodilatations (especially if with the concomitant presence of nitrates) with taking products against erectile dysfunction (sildenafil, tadalafil, vardenafil).
Last but not least, there are many cases of interference, the interference of grapefruit juice with ethyl alcohol and nicotine, which leads to an increase in the effects of these on the human body.