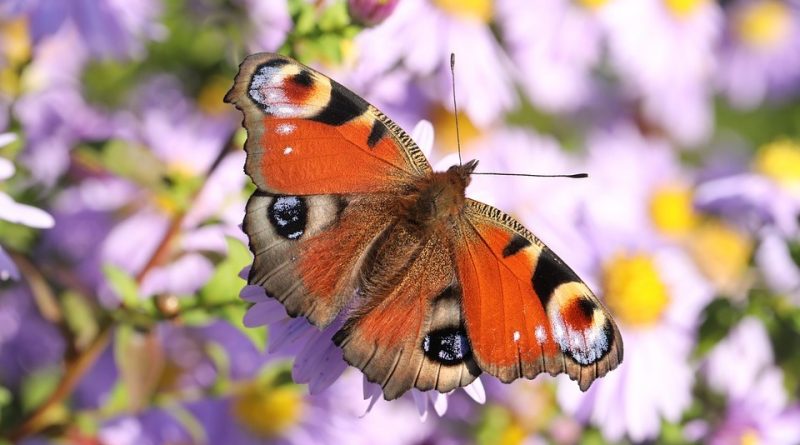 The Aglais io, more commonly known as the peacock eye (Aglais io L., 1758) is a butterfly belonging to the Nymphalidae family.

Geographic Distribution and Habitat –
Vanessa io is a widespread lepidoptera in the temperate zones of Europe and Asia, up to Japan. In Italy it is found in almost all regions, especially up to 2,500 m. s.l.m., in the woods, fields, meadows, pastures, parks and gardens.

Morphology –
The adult butterflies have a wingspan that can reach 60-70 mm; these are characterized by a brick-red surface with darker edges. At the corner of each wing we find some very eye-catching spots in the shape of an eye that perform a protective function against predators due to their majesty. Ventrally, the surface of these butterflies is instead of brownish variegated color that facilitates their camouflage.
The larvae are bright black caterpillars, with a series of white dots for each segment, with six rows of dorsal spines. The chrysalis is obtecta; has articular appendages joined to the body and sometimes not distinguishable and remains fixed suspended by means of a peduncle which is located in the distal area of ​​the abdomen). The caterpillar is distinguished by its hazelnut color dotted with black.

Attitude and biological cycle –
The Aglais io hibernates in the winter period, not before having deposited, in the period of the beginning of the spring season, groups of eggs of over 500 at a time. From these the caterpillars will be born after about a week. These spend a large part of their development in the community and then isolate themselves in the last phase, before incurring. To wait for their flickering you have to wait for the period that goes from June to July, depending on the climatic trend.

Ecological role –
The development and growth of these butterflies is linked to particular habitats; the caterpillars, spent about a week, start to feed mainly on nettles and hops. The adult diet is different; the butterflies suck nectar from many flowering plants: buddleja, willow, dandelion, wild marjoram, elderberry, aquatic hemp and clover; they also feed on the sap of trees and rotten fruit that they still find on the tree or on the ground.