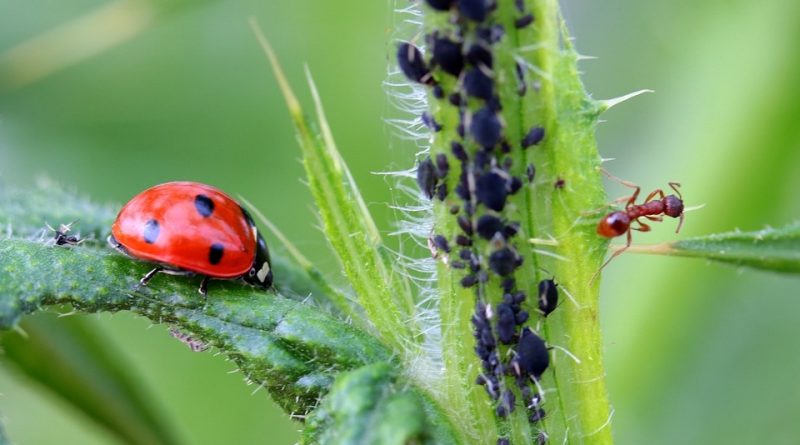 The common ladybird (Coccinella septempunctata L., 1758) is an insect belonging to the Coccinellidae family.

Geographic Distribution and Habitat –
The Coccinella septempunctata is an insect that lives and reproduces in every part of the world; especially wherever there are aphids, which are insects that are included in their diet. It lives both in natural and agrarian ecosystems but in the latter it is strongly influenced by agricultural techniques with use of insecticides and herbicides.

Morphology –
The copro of the Coccinella septempunctata is characterized by a strongly convex, ovoidal shape, with a vividly colored livery. The elytra are bright red, with the presence of three black points for each elitra, and one on the commissure, for a total of seven points (hence the epithet septempunctata). The legs are short both in larvae and in adults and can be completely retracted inside the body. The garment has powerful jaws and is black. It has relatively short and rather distant antennas.

Attitude and biological cycle –
The common ladybug is a beetle with diurnal habits and the adult appears with the arrival of heat. This insect uses stinking excretions produced by the legs and a very colorful livery in order to keep predators away. An additional defense system consists in the total retraction of the legs under the body to make it more difficult for any predators to catch it.
The biological cycle begins with the deposition of yellowish eggs by females (about 2,000).
From these emerges a larva that develops in this stage for about 3 weeks; after which it turns into a pupa, a stadium that lasts about a week. From this flickers an adult who will have an average life between 4 and 6 weeks.
This ladybird is an active predator both in the larval form and in the adult form. Their victims are mainly aphids or other small insects. They are among the most active predatory insects.

Ecological role –
The Coccinella septempunctata, like other ladybugs, represents one of the 6,000 species described. In spite of their meek and beautiful appearance, they are almost all active predators endowed with a remarkable voracity to the point that there are frequent cases of cannibalism and rather sophisticated predatory behavior. For this reason, this ladybird, like other coccinellids, plays a very important ecological role in the balance of population dynamics of aphids and other small insects, many of which are harmful to agricultural production.
The dynamic balance between these predators and the insects they feed on is however altered in the presence of insecticides, herbicides and synthetic products that often produce in the medium-long term a manipulation of the biocenotic dynamics in favor of the so-called harmful insects. for agricultural productions. For this reason the principles of biological control and above all the agroecological techniques go to restore a dynamic balance between the very delicate populations.