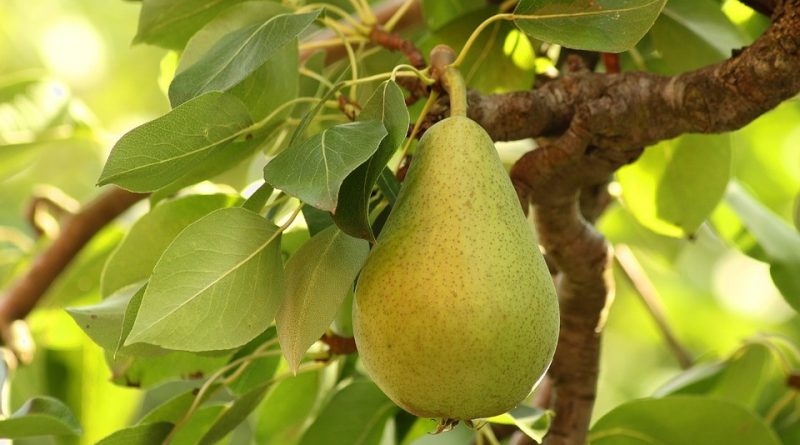 The common pear (Pyrus communis L.) is a deciduous arboreal species of the family of rosaceae that can reach 20 meters in height.

Etymology –
The term Pyrus derives from the Greek πῦρ, πῠρός pyr, pyrós fire: for the conical shape of the fruit. The specific epithet instead of the fact that it is a very common, banal, frequent species.

Geographic Distribution and Habitat –
Pyrus communis is a species native to the central and eastern parts of Europe, and to the south-western areas of Asia. It thrives in temperate and humid environments and is able to adapt to opposite climate situations. It is the species of Pyrus commonly grown in Europe for the production of common pears. 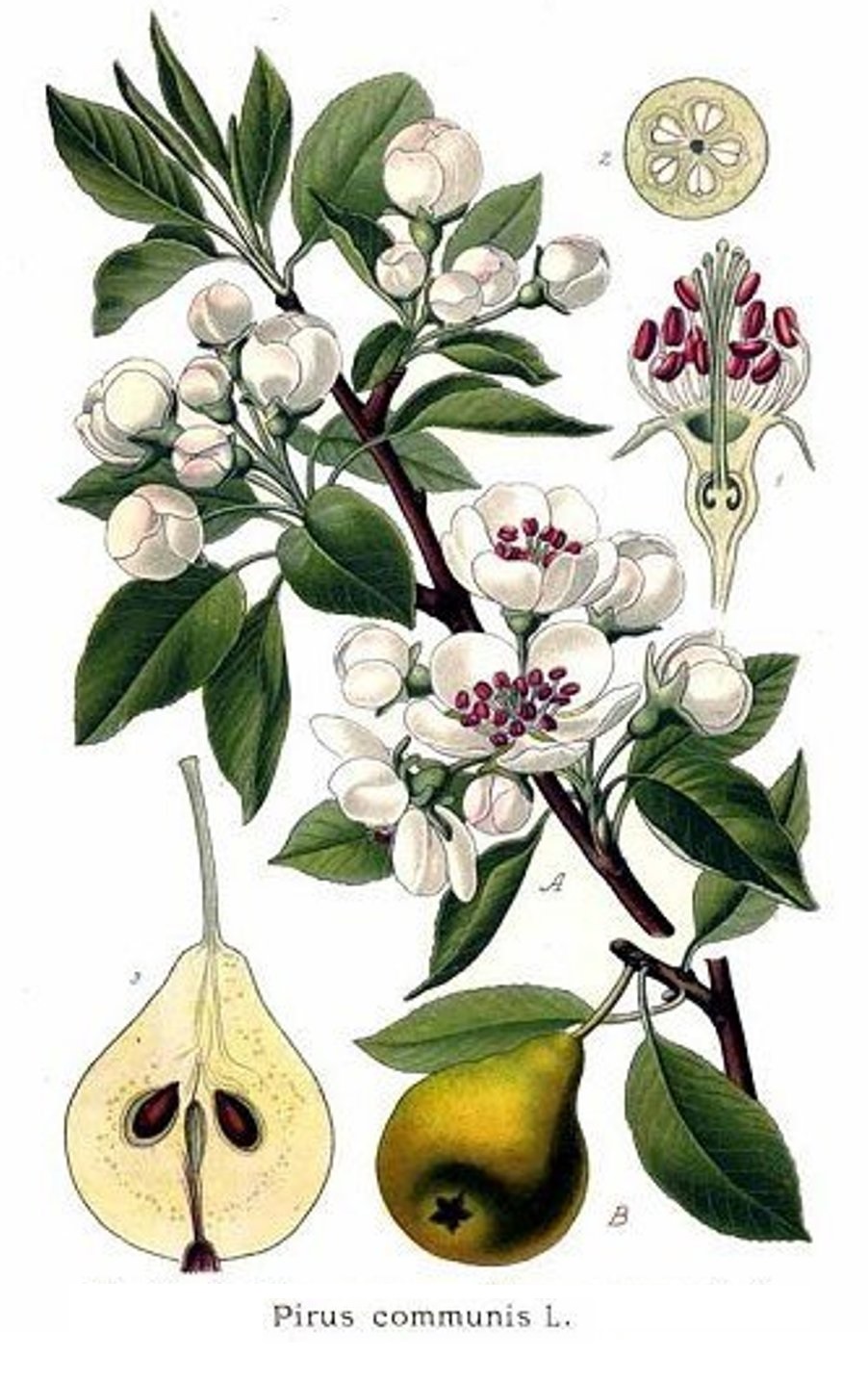 Description –
The Pyrus communis is a tree that when young, has a stem with brown bark and a pyramidal growth crown while, naturally, in the adult specimens the hair becomes round and the stem tends to crack and become wrinkled. It has a maximum height of 15-20 meters, with crowns of 7-8 meters in diameter, with deciduous leaves, oval with sharp apex, glossy and with the lower page lighter than the upper one. The flowers are hermaphroditic, have 4 white or rosy petals and are grouped in corymbs of 4-12 flowers and with flowering in the period between March and April, slightly before or at the same time as the leaves issue. The fruits are called pears and are false fruits that in botany are called “pomi”; the real fruit is the core of the pear which usually contains 10 seeds. The pears, depending on the variety, are of different shape, color and size.

Cultivation –
The pear tree is one of the most cultivated species in the world due to its climatic adaptability due to the presence of countless varieties. For the cultivation technique you can consult the following sheet.

Uses and Traditions –
The cultivation of pear trees (Pyrus Communis L.) is lost in antiquity; findings from Asia and Europe attest to its cultivation over the age of 4000 years. The poet Homer remembers the plantations of Alcinous and Laertes, while Greek mythology attributes to the pear the meaning of a healthy and tasty fruit, favored by gods and heroes. The cultivation of the pear came to Rome directly from Magna Graecia. In the Roman Empire it was widely diffused and great admirers: Cato and Plinius perfected the cultivation techniques, while Pompeo and Nero were enthralled by consumers. After the medieval decline, this culture spread in Mexico and California by the Spanish missionaries, and in Europe, in particular in Belgium and France, starting from 1700. If in the Roman era were mentioned about forty varieties, today they know over 5000, even if minimally subject to income cultivation. Unfortunately, in the last decades, ancient varieties selected, with particular botanical characteristics, are in danger of disappearing definitively. The pear contains a good amount of simple sugars (fast assimilation fructose), pectins, tannin, mineral salts, malic and citric acid, as well as phenolic compounds with antioxidant action. It is a highly digestible food and has a diuretic, stomachic, refreshing and laxative effect and is particularly suitable for the nutrition of young and old people. The pear is preserved at low temperatures, while to taste it in all its fragrance it is advisable to keep it 4-5 days at room temperature before consumption.

Preparation Mode –
The fruit of the pear tree is consumed all over the world today both in its fresh state and in the form of preserves, jams, juices, fermented and alcoholic beverages, syrups, fruit in syrup. in the kitchen it is widely used as an ingredient for desserts, fruit salads and dishes or can be tasted naturally, accompanied by spicy cheeses.