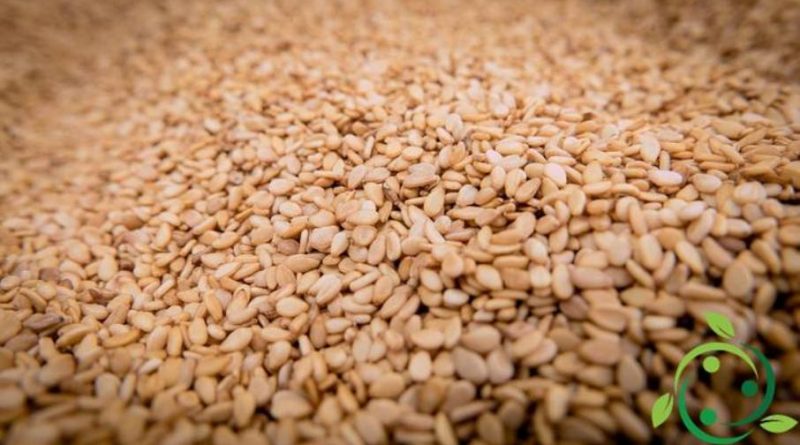 Sesame seed oil is a vegetable oil obtained by extraction from sesame seeds, with the aroma and taste of the seeds from which it is obtained. It is an oil rich in polyunsaturated fatty acids of the omega 3 and omega 6 series, which reduce cholesterol and triglycerides. In particular, it has 14% saturated fatty acids, 40% monounsaturated and 42% polyunsaturated; for this reason it is not heat stable and must be used cold to season vegetable salads or cold dishes. The taste of sesame seed oil is delicate but sweet.
Despite being rich in unsaturated fatty acids, however, it shows a good resistance to self-oxidation due to the presence of a powerful antioxidant: such as sesamol. Sesamol is in fact used as an additive for other vegetable oils to improve its resistance during frying. The point of smoke of this oil depends mainly on acidity; this in sesame oil from toasted seeds, dark brown, may be too high making it unsuitable for frying.
Cold sesame seed oil is a faint yellow color. The sesame seed oil produced in Southeast Asia instead derives its dark brown color and the fragrance from the toasted and shelled seeds.

Sesame seed oil is frequently used in South Asian cuisine as an accentuator of flavors; in Japan it is used for frying, in the preparation of the tempura. It is also commonly used in Chinese and Korean cuisine, added at the end of cooking to improve flavor and is not used as a cooking medium. There are differences in the various production techniques. Indian oil (til oil) is golden yellow while Chinese oil is generally dark brown. The taste of cold-pressed sesame seed oil is quite different from that of oil produced from toasted seeds.
In the tradition of Ayurvedic medicine, sesame seed oil, is used in application on skin and hair, with massages and cataplasms. It is precisely from the massage on the hair, traditionally with sesame seed oil, called champo in Hindi, that comes the term shampoo. Also in the 6th century BC, the Assyrians of privileged social position used sesame oil as a condiment, ointment and medicine.
The chemical and physical characteristics of this oil vary according to the degree of refining; the average values ​​of unrefined sesame oil are: Relative density (0.915-0.924), refractive index (1.465-1.469), saponification number (186-195) and iodine number (104-120).
Sesame oil is mainly composed of triglycerides with the following fatty acids: myristic acid, palmitic acid, palmitoleic acid, margaric acid, eptadecenoic acid, stearic acid, oleic acid, linoleic acid, α-linolenic acid, arachic acid, gadoleic acid , eicosadienoic acid, beic acid, erucic acid and lignoceric acid. The percentage of these is variable depending on the sesame growing technique, the pedological and agronomic characteristics and the extraction system used.