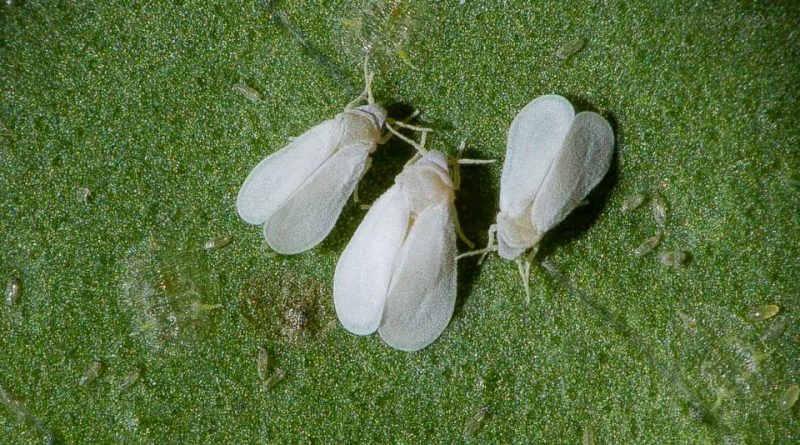 The fluffy Aleirode (Aleurothrixus floccosus (Mask.)) Also called floccose white citrus fruit fly is an insect belonging to the family Aleyrodidae and introduced in Italy in the 80s.

Geographic Distribution and Habitat –
The Aleurothrixus floccosus is an insect of geotropic origin of South America and arrived in Sicily, at the beginning of the 80s, probably from the French Riviera. This Aleirode is widespread in the citrus areas of central-southern Italy, the islands and Liguria and is favored by mild winters and hot and humid summers.

Morphology –
The adult of the Aleurothrixus floccosus measuring about 1.5 mm in length is yellowish and has the body covered with a whitish waxy powder; compared to the Dialeurodes citri has the most narrow and slender wings. The floccosus nymphs are characteristic for the abundant flaky interweaving of white wax, with which the body is protected.

Attitude and biological cycle –
The Aleurothrixus floccosus sverna in the neanid state of 3rd or 4th age; under certain conditions, it may even exceed the winter as an egg. At the beginning of the spring period there will be a flicker of adults. The females then lay the eggs with typical semi-circles or circles, on the lower page of the leaves. The number of generations per year, which is related to temperature and humidity conditions, can vary between 4 and 6 generations. Both adults and youth stadiums; they feed on sap that subtracts from the plant causing it to deteriorate. Nymphs often form thick colonies that can completely encrust the lower page of the leaves. For the containment of this insect, the following form can be consulted.

Ecological role –
Although the Aleurothrixus floccosus is an insect with a certain polyphagia, the damage, similar to those of Dialeurodes citri, are caused by adults and juvenile stages, especially on citrus fruits where they can cause damage both of biological nature (subtraction of the sap) and of aesthetic nature. In fact, the neanidi with their abundant production of honeydew that, together with the waxy production, also entrap the fruits, on which subsequently abundant fagots are established and attracting to itself even whole colonies of ants. The fruits, especially the mandarins, so affected, appear covered by a blackish patina that depreciates them commercially. This insect is partially kept at bay by two parasitic insects which are:
– Cales noacki (Howard, 1904) which is a hymenoptera of the Aphelinidae family, with the shape of a small wasp of about 0.6 mm long, orange yellow and long legs, parasitoid endophagus of the nymphs of Aleurothrixus floccosus and also of southern origin -American;
– Aphelinus mali (Haid.), also parasitoid endophagus but less effective than the previous one in the containment of flaky Aloe.