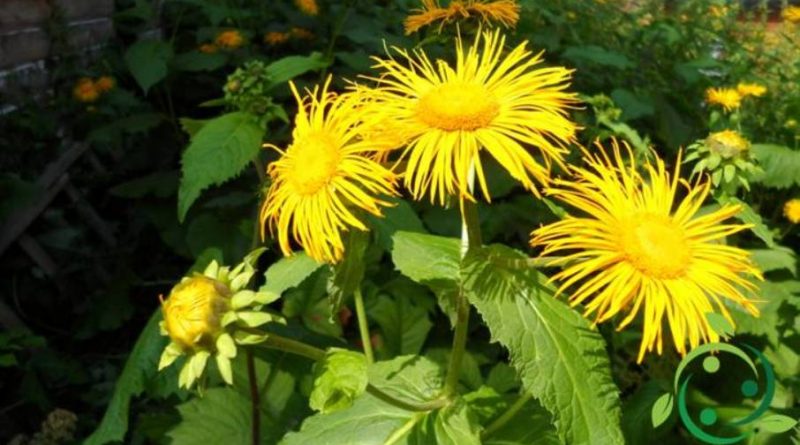 How to cultivate the Campania Enula

The Elecampane (Inula helenium L., 1753) is a perennial herbaceous species with yellow flowers of the Asteraceae family. It is an original plant or South Eastern European or, according to other authors of the West Asia. In Italy we find the Enula campana in the north, in the middle and partly in the south. It is present in particular on the Alpine arc where it is possible to find it frequently in the province of Como. (missing in Trentino-Alto Adige, Calabria and Sicily); In Europe it is widespread especially in the southern areas. On the European reliefs it is present in the Vosges, Black Forest, Pyrenees, Central Massif, Jura Massif, Carpathians and Balkan Mountains. In this sheet we see how to grow the Enula campana, starting from its botanical characteristics and its natural habitat. It is a perennial herbaceous plant whose height can vary from 1 to 1.8 m (maximum 2 m). The Enula campana prefers ruderal places and damp scrublands, coppices and ditches; but also hygrophilous meadows and pastures. The substrate most suitable for its growth is medium wet, both calcareous and siliceous, with soil at neutral pH and with high nutritional values.

For its cultivation, moreover, it should be noted that this plant grows above all between 500 and 1200 m s.l.m .; then attending the following vegetation plans: hilly and mountain. The cultivation of this species also extends to gardening and to ornamentation with cut flowers. Although their appearance is a bit coarse they are easy to grow and have a strong vegetative development. The species was once widely cultivated, so its presence in some regions could be due to rinselvatichiti specimens. The suitable sowing period is that of the beginning of spring, also directly in open field, or to obtain a more homogeneous and anticipated rooting, in seedbeds, with drilling when the seedlings have issued the first leaflets and reached a height of 8- 10 cm. The species requires irrigation immediately after transplanting and then, once rooted, only if the rainy season is drought. The irrigation is again required from the month of end-April May until the beginning of autumn, depending on the pluviometric trend. Irrigation should then be suspended only in the vicinity of maturation to allow a greater concentration of active ingredients. The plant blooms between July and September. The used parts of the Campanula are above all the root, from which are obtained preserves and extracts. The harvesting period is autumn or early spring from adult plants.
The main active ingredients contained in this plant are: small quantities of ethereal oil together with 1 – 3% of crystalline substance (this is the essence of the Inula); we also find high percentages (19 – 45%) of inulin. Some substances of this plant (such as sesquiterpene lactones) can cause allergic contact dermatitis; moreover, high amounts of these substances can cause vomiting and diarrhea. The plant was above all a time cultivated for its roots. The root of this plant was used by doctors as stomachica (facilitates the digestive function), vermifuge (eliminates intestinal worms), tonic (strengthens the body in general), diuretic (facilitates the release of urine) and resolutive in general. The Enula campana also possesses soothing balsamic properties of the cough (acute and chronic bronchitis). As external use it is indicated as valid for solving skin problems such as eczema or cold sores (but also insect bites). Recently, a certain antibacterial activity has also been demonstrated. In the industry it is used for blue dyeing. Also in ancient times it was used to prepare some liquors and wine-based drinks. In France and Switzerland it is used in the manufacture of absinthe.