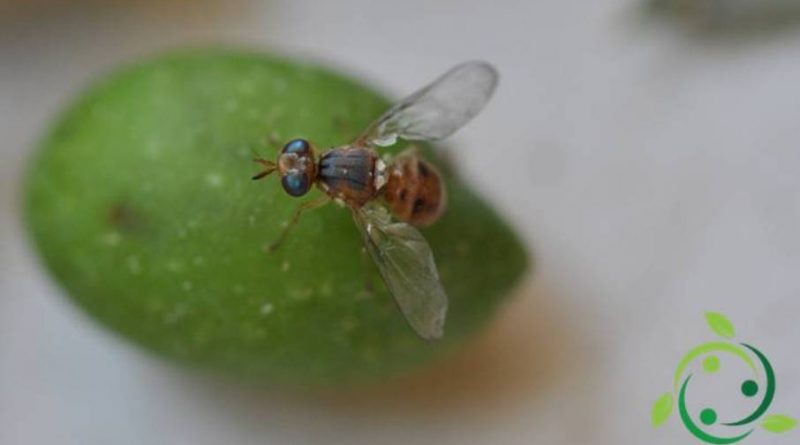 The olive fly or oil fly (Bactrocera oleae Gmelin, 1790), is an insect of the Tephritidae family.

Geographic Distribution and Habitat –
Bactrocera oleae is present throughout the Mediterranean basin and in South Africa, in California (arrived at the end of the 90s), has also been spotted in some parts of Africa, in the Canary Islands, China, California, Mexico and in the Center America.

Morphology –
Bactrocera oleae has a slight sexual dimorphism. The adult, which measures approximately 5 mm in length, has a golden-brown color, with reddish head and metallic green eyes; the chest is ash-colored, streaked with black and the scutellum is yellow. The wings are transparent with iridescent reflections, while the abdomen has black spots. The larvae, which measure about 8 mm in length, are apode, with a yellowish-white color, with a decrease in diameter towards the cephalic end; in these are visible the two black jaws, hooked, protruding from the head. The egg of the olive fly is about 0.7-1.2 mm long, elongated and slightly flattened in the abdomen, also has a small whitish micropilated tubercle, which serves for the embryo’s respiration.

Attitude and biological cycle –
Bactrocera oleae winters as pupa in the ground; but in warm climates it can also winter as an adult or as a larva inside the olives left on the tree. Adults begin to flicker like that already at the beginning of spring. The fly of the oviparous olive tree, usually in the small fruit trees from June until July. On average, each female lays between 200 and 250 eggs, with only one egg per fruit, inside the pulp. The eggs are opened after a few days, depending on the climatic conditions; after which the larva immediately begins to feed itself by digging tunnels in the mesocarp of the small fruit. At maturity, the larva is impupa in the fruit or in the ground; adults flicker after about a week. The complete biological cycle, during the summer, is about 3 weeks. In all it can be from 2-3 generations in the cooler climates up to 6-7 in the milder ones. The oviposition slows down only in the hottest months of July-August to resume at the end of summer and throughout the autumn but with olives present on the tree, and in favorable climatic conditions, the number of generations can be even greater. For the containment and biological control methods, see the following sheet.

Ecological role –
The adults of the Bactrocera oleae feed on sugary and protein materials and the juice that comes out of the olives following the bites of the oviposition. The larvae feed on the pulp of the fruits, inside which, to feed themselves, they dig tunnels; to the damage due to the rosura is added that due to microorganisms that cause rottenness, with consequent cascola. In addition, the olive fly is the vector of olive tree stew transmission (Pseudomonas savastanoi). The greatest damage occurs when the infestations occur in late summer and autumn, because they cause huge losses of product; the oil obtained from these olives is of poor quality, with greater acidity, with an unpleasant aroma due to the smell of mold. Bactrocera oleae is the most serious adversity to the olive tree. The incidence of its attacks tends to accentuate in the wetter and cooler regions of the cultivation area, with considerable variability according to the cultivated variety, while it becomes less marked in areas with hot and dry summers and on oil cultivars. However, its proliferation has increased with the increase of specialized olive-growing systems, with mineral fertilization techniques, with systems that do not respect the agro-ecological principles and with the indiscriminate use of various insecticides and pesticides.