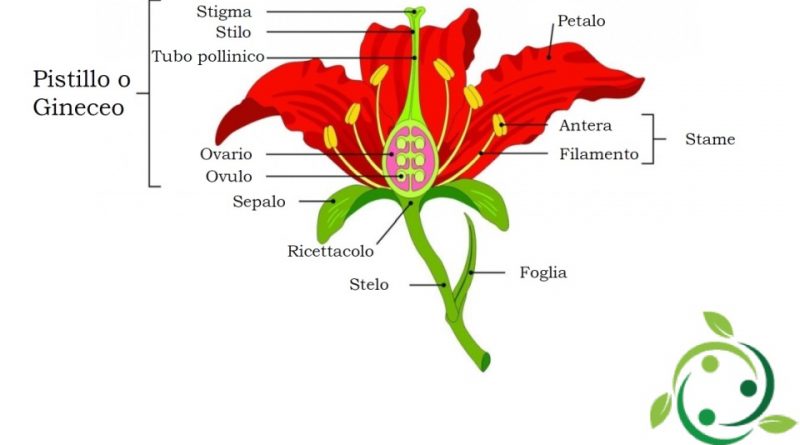 The Gynaeceum, formerly also called pistil (from the Latin pistillum: hand of the mortar) is the female part of the flower formed by carpels free or fused together, located in the central part of the flower. In a Pistil three parts are distinguished: the ovary, the stylus and the stigma. This organ is made up of carpels (one or more), above which the ova or seminal primord will be produced, which will contain the female gametes. In the gynaeceum different parts are distinguished.
– the ovary, which will give rise to the fruit, is the lower part, with inside cavities called “loculi” that contain the eggs;
– one or more styles placed on top of the ovary and sterile parts that serve as a “cane” where the pollen grains will deposit, which will be retained by the secretion of the stigmatic liquid;
– the stigma that is a cavity located at the top of the stylus with the function of receiving the pollen (male gametes) that will fertilize the eggs.
When the gynaeceum is devoid of stylus and stigma (in this case called sessile stigma) it is placed directly above the ovary.

If the carpels are separated, the gynaeceum is called dialicarpellar or apocarpic if, instead, they are welded together, then it is called gamocarpellar or syncarpism, which in the plant kingdom is the most frequent.
The stylus is of variable length; this can range from less than 0.5 mm (substile stigma) up to more than 30 cm in certain varieties of maize, known as the panicle’s beard.
The stigmas can take variable forms, feathery in the grasses, in cabezuela in the Citrus, lobulates in the Cucurbita, petaloids in the Canna, up to the shape of inverted umbrellas in the case of Sarracenia. In turn, the stigmas are divided into two large groups: wet and dry stigmas. Wet stigmas release an exudate during the receptive period. Dry stigmas do not release liquid secretions, but produce proteins or waxes; these can be plumose (like in grass) or not plumose.