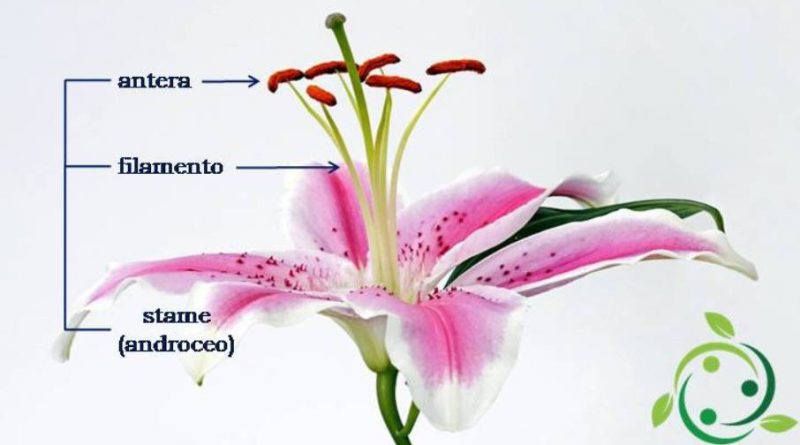 The stamens are the organs that make up the androceum (male fertile part) of the Angiosperm flower and can be free or grouped together. These are inserted into the receptacle. A stamen consists of a filament by means of which it is inserted on the support and from the anther. The filament is the sterile part of the stamen that supports the anther and is usually of a filamentous shape. The anther is the fertile part of the stamen and is made up of two display cases divided by a rather deep median septum which is clearly visible on the outside. The cases in turn are formed by cavities that are the pollen bags inside which are the microspores that are called pollen grains (male gametophytes). The cases are joined together by a sterile (connective) tissue and inside these we find a sporogenous tissue, called archesporio, whose cells will give rise to pollen grains; these granules are in turn surrounded by a nutritious fabric that is the carpet. This fabric is surrounded by a mechanical or fibrous layer that is responsible for opening the anthers.

Depending on how the filament is inserted into the anther we can have: dorsifisse anthers when the filament is inserted on the back of the anther; apicifisse anthers when the insertion is apical which differs from the base because it is thinner than the latter; basifisse anthers when insertion occurs at the base of the anther; anther ventrifisse (very rare) when the insertion is in the ventral part, which is the part where the anther will open to allow the exit of the pollen grains.
The different insertion models are related to the type of pollination: when the pollination is entomophilous (by means of insects) the anthers are basifisse; when the pollination is anemophilous (by means of the wind) the anthers are apicifisse.
In the various morphologies of the flowers the stamens can be free or welded for the filaments:
– if the stamens form only one group, they are called monadelfi with all the filaments welded to form a sort of tube;
– if the stamens form two groups, they are called diadelfi;
– when many groups of stamens are formed, these are called polyadelfhes.
Another morphological distinction of the stamens is made according to the length; on this basis the stamens define themselves:
– homodyms if all the stamens are of the same length;
– let me know if we have 4 stamens of which 2 longer and 2 shorter;
– tetradinami if we have 6 stamens of which 4 longer and 2 shorter.
Moreover, when the stamens are sterile they are called staminodes and according to the number of stamens the flowers are said:
– monoanders when they are equipped with a single stamen;
– dianders with two stamens;
– polygres, if equipped with many stamens.