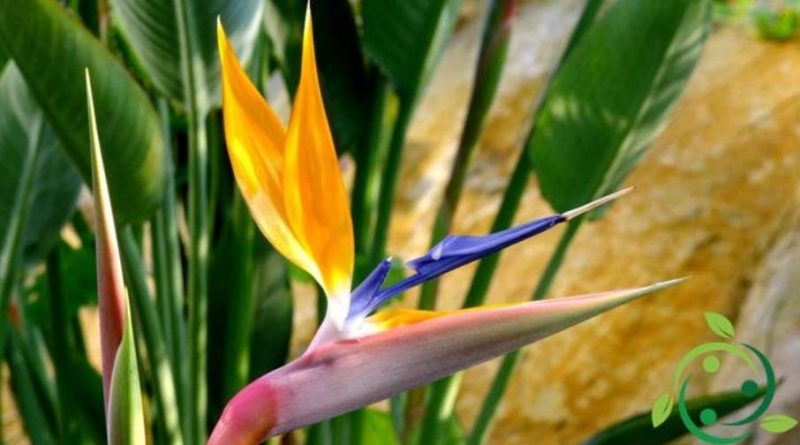 How to grow Strelitzia

Strelitzia (Strelitzia reginae Banks), also known by the common name of Bird of Paradise, is a herbaceous plant belonging to the Strelitziaceae family, native to southern Africa. In this sheet we will see what are the essential characteristics of this exotic plant and how to grow Strelitzia. Sterlitzia, being a plant of tropical origin, fits well especially in mild, warm and, possibly, humid climates. Strelitzia is a simple plant to grow and also resistant to different climatic conditions; nevertheless, the ideal temperature is that which varies between 13 ° C and 20 ° C, with lows never below 5 ° C. This means that, in Italy, outside it is possible to grow it only in the southern coastal areas and particularly sheltered from cold winds. Also you have to put it in a very bright area.
The flowering period of Strelitzia is from autumn to spring, but after five years. For cultivation we can start from seed or by division of tufts. The division of the tufts must be done dividing the root system into two parts with a sharp and disinfected blade, possibly disinfecting these parts with a fungicide and transplanting the two parts in an area (or vessel) previously fertilized with organic substance (earthworm humus, compost , or soil for flowering plants) and protected at the beginning by the direct rays of the sun.

Immediately after, it should be irrigated abundantly and frequently, until the plant begins to emit new leaf shoots. The substrate must be absolutely permeable and possibly non-clayey and calcareous; irrigation must not lead to any stagnation. Strelitzia irrigation should be carried out abundantly except in June and July (when the plant enters dormancy) where it should be watered a little.
Given its origins, the plant prefers humidity and therefore it is advisable to spray the leaves. If it is grown in pots, the Strelitzia must be repotted in the spring until it reaches five years of life. The pot should be a little larger until it reaches 30 centimeters in diameter. After 5 years the plant is adult and begins to bloom so it must not be repotted to get a good flowering. The repotting operation is performed by removing a little of the old exhausted soil, when the plant has not flowered. Before repotting, place the drainage material on the bottom of the new vessel (very large gravel, perlite, etc.) and the vase must be filled with new soil with the addition of compost or earthworm humus. In the open field mature manure is recommended.
The optimal period of fertilization of Strelitzia changes if grown in the garden or in a pot. In the garden it should be enriched every year, in the autumn period with mature manure (or compost) mixing it in the first layers of soil; in pot, liquid fertilizers must be added, to be dissolved with water to water, from October to May, even on a monthly basis. Before flowering, the fertilizers must be richer in nitrogen and less in potassium and phosphorus, after the flowering the percentage must be changed and the fertilizer must be richer in potassium. It is always good that the predominant part of the fertilizer is organic in nature.
Strelitzia should never be pruned but dried leaves should be eliminated (also due to an obvious appearance) and to eliminate the parasites that have nested in these.
Among the most feared parasites from Strelitzia, we remember the rottenness due to the Phytophtora, which must be kept at bay with a careful irrigation technique (let the soil dry slightly between one irrigation and the other); for this fungus it can be treated with Neem oil, which is quite effective against aphids and cochineals and red spiders. To eliminate most of these pests, the leaves can be cleaned using a damp cloth without polishing.