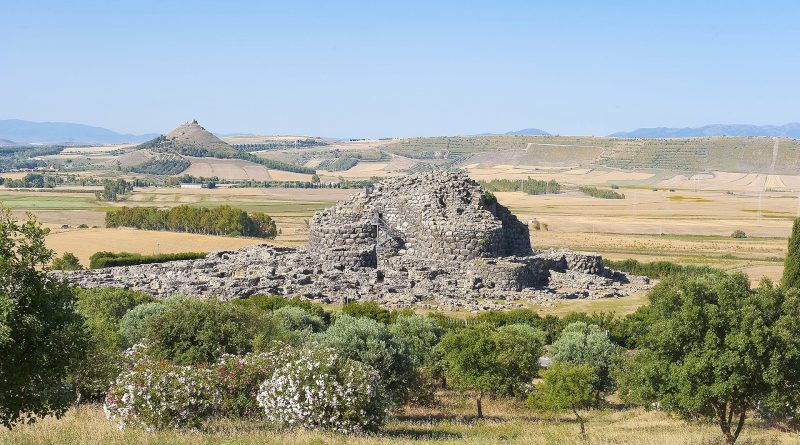 The term Protosardi, Paleosardi or Sardiani refers to the ancient Sardinian peoples of the prenuragic and nuragic period; for the latter the name of Sardis is also used. The first findings to testify to the presence of Homo Sapiens in Sardinia were found in the Corbeddu cave of Oliena, where a human phalanx dating back to 18,000 BC was found. which would demonstrate an ancient settlement and isolation of this population. The first stable colonization of the island, by people coming from the sea by the Italian peninsula, can be found in traces discovered in the cave Su Coloru of Laerru, in the Anglona.
The first relationship between the ancient Sardinian peoples and agriculture is in the ancient Neolithic, with the advent of ceramics. In the recent Neolithic period the culture of Ozieri develops, showing oriental influences, in particular Aegean and Cycladic, while Gallura stands out for its pastoral and “aristocratic” civilization called the culture of Arzachena. But it is above all the great migrations coming from North Africa and the Near East that on the island mark the introduction of farming and agriculture, starting from 10-8 thousand years ago; to which were added new populations and new influences on breeding techniques and agriculture.

The Paleolithic and Mesolithic Protosarda society was based primarily on a subsistence hunting and gathering economy. Starting from the Neolithic period, the society is focused on agriculture and breeding; in this period, this nomadic hunter-gathering people learn to recognize, select and cultivate the graminace that guaranteed the most important food base. From this moment the population becomes sedentary, with a permanent home in a territory suitable for agricultural crops.
We must however arrive at the Nuragic civilization, which developed in Sardinia between the full Bronze Age (1800 BC) and the II century BC, now in Roman times, to have more comprehensive data on what were the agro-silvo-pastoral activities of this ancient Sardinian population. These activities are testified by various findings in bronze (hoes, sickles, rakes). These tools have been found both in the nuraghi and in the villages and in other sites of the nuragic age. The plow was not found but as this, almost certainly it was built in wood, it is difficult to arrive today. These tools were used for the cultivation of cereals of which spelled and wheat were predominant in consumption compared to oats and barley; the proof comes from the discovery of charred seeds in some nuraghe and nuraghic villages. Over time the wheat and barley gradually supplant spelled. Some food habits and archeology of ceramics for the preservation and cooking of foods suggest that cultivated vegetables and herbs already cultivated in the pre-Nuragic era were cultivated. Among the fruit trees it can be said that the fig tree, the vine, the olive tree and perhaps the almond tree and the pear tree were cultivated. Of these it is certainly the olive tree because of the discovery of olive pits and charred pollens made in the nuraghe Duos Nuraghes in Borore and in the nuragic village of Su Putzu in Orroli. These findings also attest to the importation of species of olive trees from other places; among other things, an olive trunk, dating back to the C14 analysis at 1.475 BC, was found in the central tower of the nuraghe Su Nuraxi in Barumini. The findings found would suggest an abundant production of oil and poorer cheese, which leads to the exchange and trade of these products. In fact, they were found of typical terracotta containers for oil already made in Mycenaean, Cypriot or Cretan manufacture at the Arrubiu nuraghe of Orroli and Antigori in Sarroch.
As for the cultivation of the vine, after a wide debate among historians, that made its introduction by the Phoenicians go back, the latest findings indicate that it was already cultivated by the Nuragic people (as early as 1400 BC) long before the Phoenicians arrived . The findings are due to grape seeds and pollens found in ancient settlements. But that’s not all, vinification was a well-known and consolidated practice. This testimony comes from fragments of a jug (1,000 BC) found in the nuraghe Bau Nuraxi in Trei, containing tartaric acid (a product that attests to the presence of wine) and, with it, the commerce of wine from the cultivated areas to the most inaccessible non-cultivated ones. But the finding that more than others (1,200 B.C.) gives us an exhaustive panorama on the vitiviniculture of the nuragic era is that of the site of Sa Osa near Cabras. Seeds of figs and grapes, found together, lead us to think that in the Nuragic era, in order to increase the sugar content of the wine, figs were added; practice in use with Sardinian winemakers until not long ago.
Ultimately we can affirm that agriculture was a pre – eminent activity in the nuragic society with the production of oil, wine and cereals on almost the entire island territory, which were exported even outside the island.